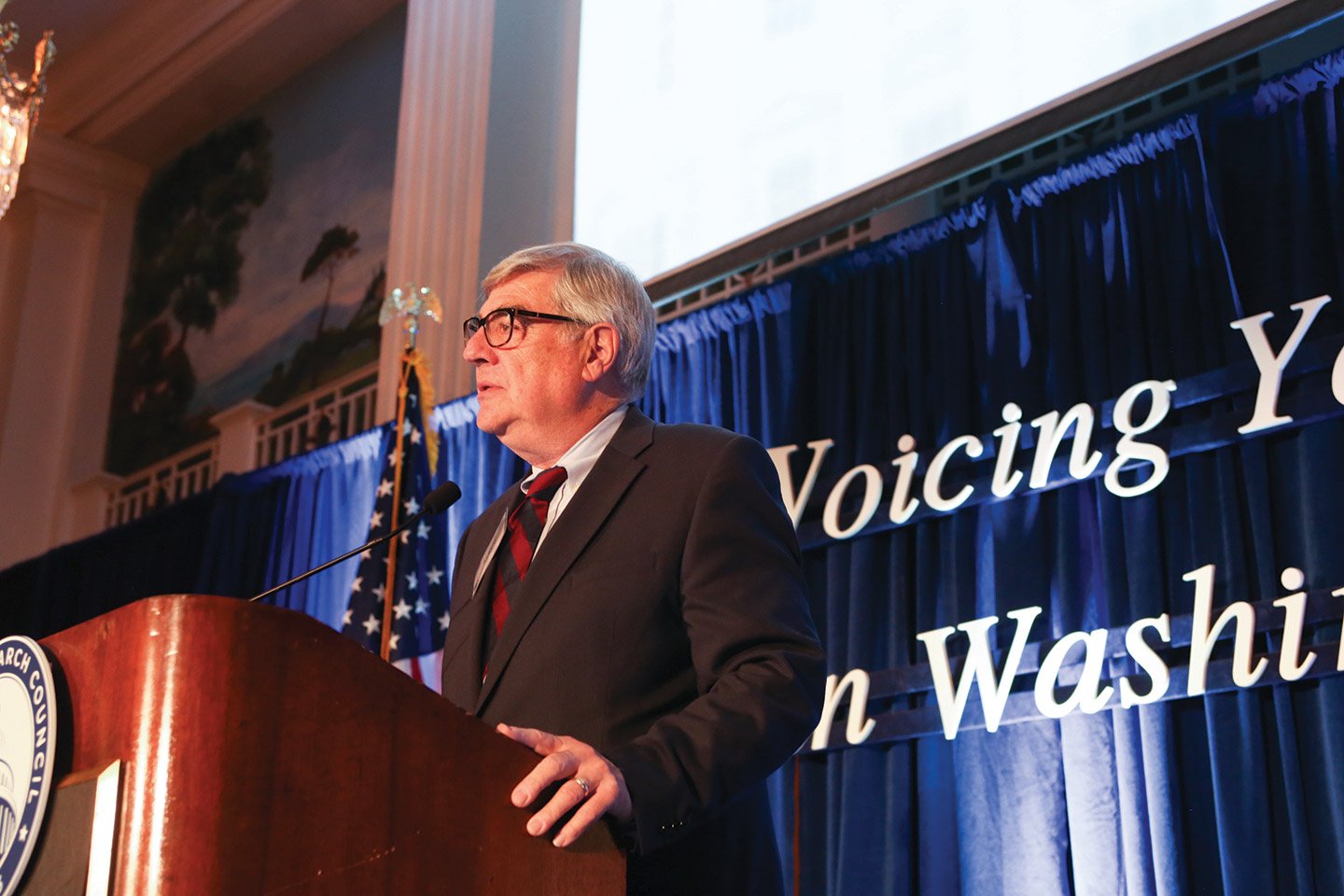 Faith, work, family, and friends have been woven together throughout Stephen Reed’s life. Having grown up “in the shadow of Pasadena College,” Reed has been committed to the church for all of his life. As an attorney, he has worked hard to preserve and protect religious freedoms. As a husband and father, he has sought to make family a priority even when work pressures were high. As a churchman, he has always been both servant and leader.

Reed’s connection with Pasadena College (now PLNU) began long before he was a student. His grandmother was the secretary for H. Orton Wiley, former university president, and then became the registrar. Both Reed’s parents graduated from Pasadena College as well. When Steve enrolled at Pasadena College, he planned to major in history. However, after taking psychology from Dr. Paul Culbertson, Reed decided to double major in history and psychology. In addition to his studies, Reed served as editor of the student newspaper, junior class representative, and student body president.

During Reed’s senior year, Dr. James Jackson, who was Dean of Students at the time, encouraged him to apply for a Rotary International fellowship program. The rigorous application process took approximately eight months to complete. By the time Reed found out he had been selected, he had graduated from Pasadena College and was enrolled in law school at the University of Southern California (USC). After some negotiating with his law school dean, Reed was given permission to study abroad. Thus, in 1966, he flew to London and became a student at University College, which was founded by English philosopher Jeremy Bentham. While there, he wrote a thesis and earned a post-graduate diploma in law. He also attended lectures at the London School of Economics.

After his experience abroad, Reed returned to USC and graduated with his Juris Doctorate in 1969. He passed the California Bar Exam that summer and was admitted to practice law in January 1970. He practiced in a series of firms where he was an associate, partner, or owner for nearly 50 years before he retired in 2018.

“I would have to say that my involvement with Focus on the Family and Family Research Council represents the highlight of my legal practice. Working with these ministries, I was allowed to be involved in really significant public policy debates.”

“My primary area of law in terms of number of clients and projects, was real estate,” Reed said. “That was one of my favorite areas of practice. I also spent 30 years as general counsel for Focus on the Family. I was there at the beginning and worked with Dr. [James] Dobson for 30 years in that ministry.”

Reed also worked on issues related to family and the pro-life movement with churches and other Christian organizations, including Family Research Council, for which he served as general counsel and corporate secretary.

“I would have to say that my involvement with Focus on the Family and Family Research Council represents the highlight of my legal practice,” he said. “Working with these ministries, I was allowed to be involved in really significant public policy debates.”

Reed also wrote numerous amicus curiae briefs on cases involving issues of free speech, the exercise of religious freedom, free association, and the right to life. Amicus curiae briefs are written by individuals or organizations who are not party to a legal case but who assist the court by offering expertise or insight that relates to the case.

“I think the biggest and most perpetual challenge of my law practice was learning how to balance my time between the law and my obligations with my wife and daughters,” Reed said. “The law can be an all-consuming, demanding profession. It will consume as much time and energy as a person is willing to allow it to have.” Because of the number of his clients, it would have been easy to focus solely on work. But that was never something Reed did. In fact, not only did he spend time with his own family, but he also mentored young families by teaching the “Marriage Fellowship” Sunday school class at Pasadena First Church of the Nazarene.

His involvement at Pasadena First Church was lifelong. He grew up in the church, served on its board for many years, and even served as the church’s legal counsel. Today, even though he and his wife, Doris, live most of the year in Idaho, they are still members.

“Our roots and hearts are there,” Reed said. “I was its lawyer and secretary of the board. I also helped represent the church when it needed funds to build the site it has right now. We were able to obtain $5 million in church bonds, which was the largest permitted bond offering in the state at that time.”

PLNU congratulates Stephen for being honored as a 2023 Distinguished Achievement Awardee.