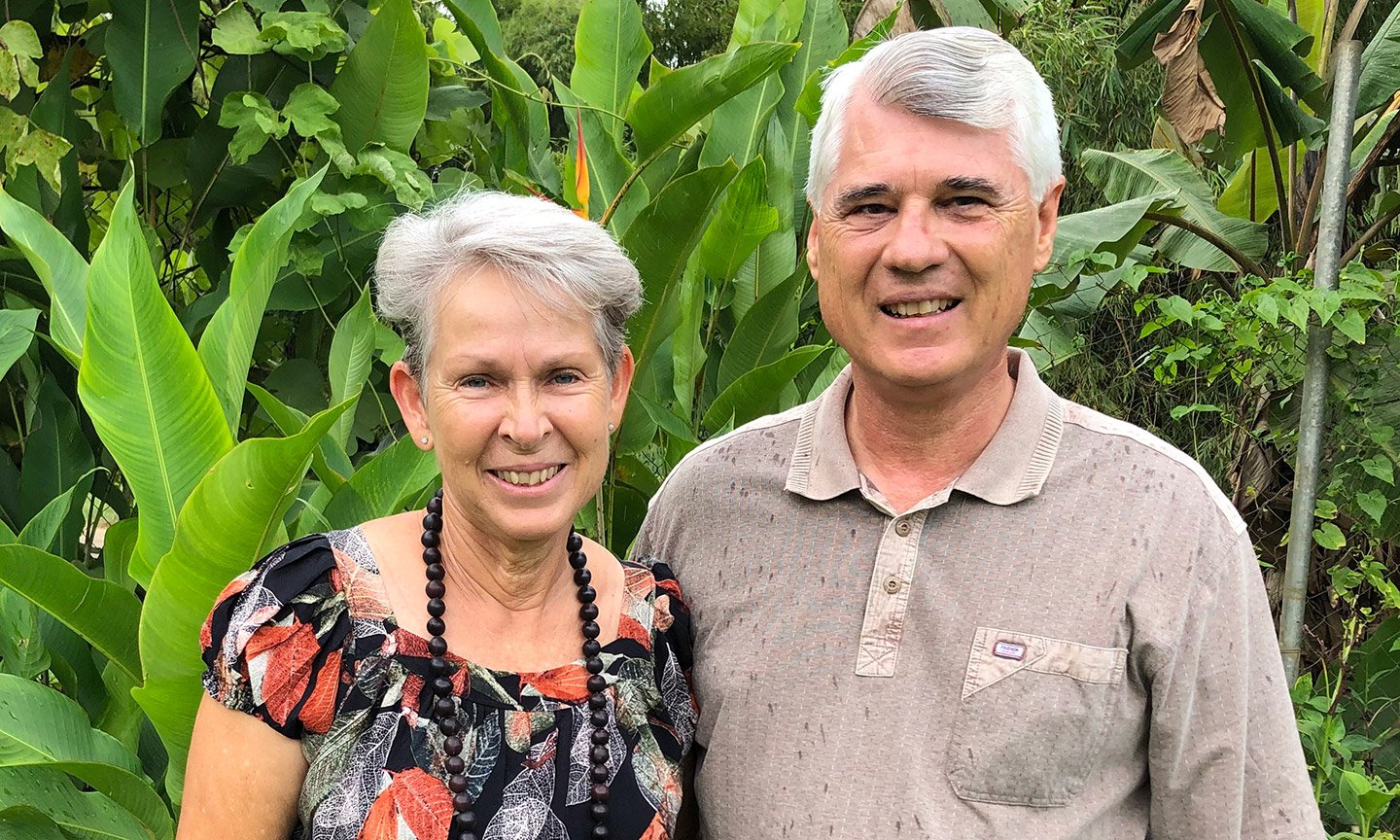 In a remote part of Papua New Guinea (PNG), the Rev. Sylvia (Heasley) Potter was in the midst of an eight-hour walk to speak at a women’s conference when the slippery conditions on the mountains became treacherous. As she struggled and slipped in the mud, a man named Bunya began to guide her.

“He said to me, ‘Watch where I put my feet, and put your feet where I have stepped,’” Sylvia recalled. “As I did that, it got easier as I got more focused on following. That was really helpful to me in understanding what it is to be a follower of Jesus and the Holy Spirit who guides us in our walk.”

For Sylvia and her husband, the Rev. David Potter, life and ministry have meant following God across many different conditions, through challenges and blessings, across the globe, and without always knowing what would come next. All this, to the Potters, has been challenging yet very fulfilling.

David’s call to ministry came at just 5-years-old. David said that God confirmed his calling multiple times after that. When he met Sylvia, he let her know right away that though he didn’t yet know all the details of what work he would be doing, he knew it would be as a missionary. Sylvia asked God if she was meant to serve in missions as well, and He confirmed for her that she was.

After David graduated in 1979 and Sylvia in 1980, the two worked as nurses in San Diego until 1986. At that time, they moved to Kansas City to begin seminary. There, Sylvia worked in a doctor’s office, and David worked in the urgent care facility that was part of the same Christian family practice group. When it came time for their first mission assignment, the Potters were asked to serve in one of the places to which Sylvia hadn’t felt a particular calling: Papua New Guinea. This didn’t surprise her, however, because she knew God often challenges missionaries to go to places where they don’t feel as comfortable. For that reason, she felt prepared for the assignment and happy to go.

“It was pretty exciting,” she said. “There wasn’t a lot of sadness or feeling badly about leaving; it felt satisfying that we were finally on our way to following God’s call.”

After some preparation and packing, the Potters took their three sons, Wesley, Jeffrey, and Joel, who were 4, 6, and 8 at the time, and headed to PNG. But before they left, one of the places they said goodbye was Mission Valley Church of the Nazarene in San Diego where they were members.

“[One of the church members who also worked at PLNU] Sharon Bull arranged to get us a special string bag called a bilum that they make in PNG,” Sylvia said. “They presented it to us at that service. It’s what mothers carry their babies in. It’s very beautiful and colorful and represents a safe place. The bilum was always displayed in our living room everywhere we went on the mission field.”

Once the Potters arrived in PNG, they advanced their learning of the Tok Pisin language with the help of the people they met. David became the principal of the Nazarene College of Nursing and later served as district superintendent for the Middle Ramu District of the Church of the Nazarene. The Potters had many meaningful experiences in PNG, including Sylvia’s treacherous hike to the women’s conference. Once she arrived that day, Sylvia spoke to 300 women who not only didn’t know English but who also didn’t speak Tok Pisin.

“I could only speak English to God,” she said. “Everything I said to the women had to be translated from Tok Pisin to their local language, yet they listened and were attentive to the teaching I gave. I learned a verse just before I began my walk. In Ephesians 5:4 — the Message version — it says, ‘Thanksgiving is our dialect.’”

For David, a particularly meaningful experience came when the government asked the Nazarene College of Nursing in Kudjip, PNG, to go from a certificate-level program to a diploma-level program.

“We needed to create a quality assurance team, so I invited universities to send their chairs if they would,” David said. “I hoped for one to come. What happened was that Margaret Stevenson [Point Loma’s nursing chair] and [President] Brower and the provost [at the time], Patrick Allen, all came — as did chairs from MidAmerica, Olivet, and Southern Nazarene Universities and Malone College. They came and had wonderful experiences there in PNG … God put that together. The consortium that they created and the humbleness and the cooperative collaboration between all these people was just amazing.”

Of course, there were challenging times and situations as well.

“Eight months after we were there in Kudjip in PNG, I heard gunshots and shouts,” David recalled. “There was this wall of fire around our end of the [Nazarene mission] station. It turned out there was a tribal fight going on. People had come down the mountainside and burned down a whole village of homes. People were running and climbing the fence. We had to flee to the other side of the station.”

To make a scary situation worse, the Potters’ oldest son, Joel, wasn’t home at the time, and they weren’t sure where he was or if he was safe. Thankfully, when they arrived at the home of one of the doctors, Joel was there, and he was safe. The doctor was also sheltering 20 villagers until they were able to be safely evacuated by the police the next day.

“During difficult times like that, we learned to cry out to our Lord, and He protected us and helped us,” David said.

The Potters served in PNG from 1992 until 2003 when they were called to Vanuatu, a small collection of islands in the South Pacific, to begin the work of the Church of the Nazarene there. As pioneer missionaries, one of the big differences in Vanuatu was that they didn’t have the same kind of support system surrounding them that they had in PNG where there were other missionaries, the college, and the hospital. However, the Potters’ home was right in the middle of a community of Ni-Vanuatu people, which made it easy to gather them together for worship.

“During difficult times like that, we learned to cry out to our Lord, and He protected us and helped us,” David said.

“People were familiar with Christianity and very curious,” the Potters recalled. “They wanted to be friends and to help us with things. They were very kind to us and embraced quickly.”

As their ministry grew, the Potters trained and equipped pastors and leaders for the church. They also began teaching Bible college classes, which eventually led to the founding of the Vanuatu campus of South Pacific Nazarene Theological College (SPNTC).

In November 2021, the Potters left Vanuatu to return to the USA. The timing felt right as good people were in place to continue on their work in Vanuatu. Now living in Michigan, the Potters are looking forward spending more time with their sons and being intentional in grandparenting their seven grandchildren.

In addition to their bachelor’s degrees in nursing, David and Sylvia each have advanced degrees. David has an M.A. in missiology from Nazarene Theological Seminary, and Sylvia has an M.A. in spiritual formation from Northwest Nazarene University. They are both ordained elders in the Church of the Nazarene.

PLNU congratulates the Potters for being honored as 2023 Distinguished Achievement Awardees.