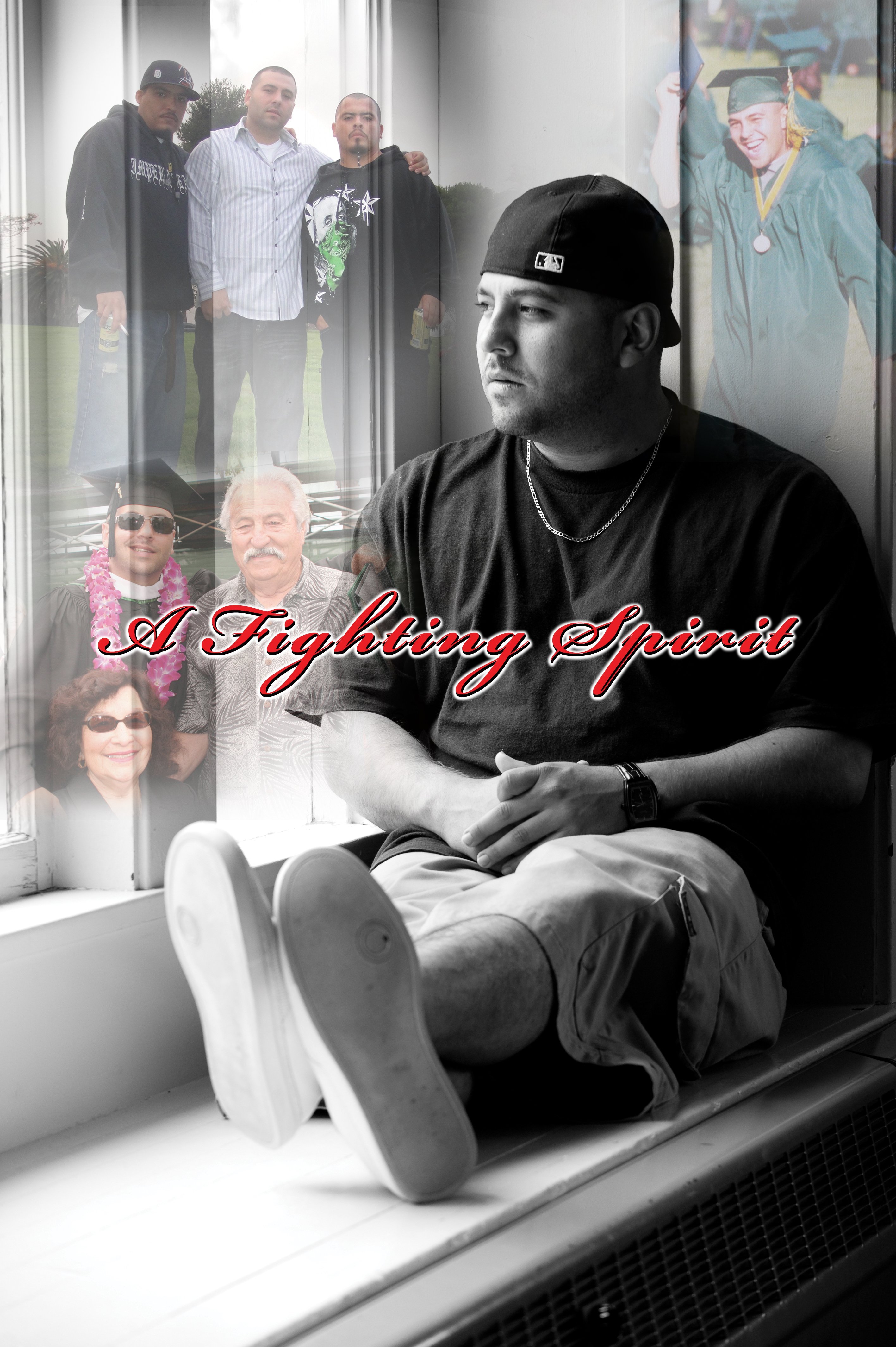 Eddie’s feet pounded the pavement in quick succession as he jogged home from the high-risk youth day camp he attended after school. He didn’t mind the sweat collecting on his brow – today was a big day. Today was when home would be the home it was supposed to be, the home with both his parents in it. Eddie’s mother had been released from prison a few days before, and today his dad was also getting out of the joint. They’d all be together – Eddie, his mom, dad, and sister, Starla – like a picture perfect family (well, almost) as soon as he could get there.

Though Eddie slowed up as he got to his place, he was still slightly breathless when he opened the door. But it wasn’t right. The scene wasn’t what it was supposed to be. In fact, both Eddie’s parents were already high. It took a moment for the shock to translate into rage, but when it did, Eddie was overcome. Without a word, he fled from the apartment, running again. He smashed up cars along the street, trying to purge his mind of the questions that tormented him. But it was no use. When he stopped to breathe, it was there still: why did his parents love drugs more than they loved him?

Eddie spent the night at the home of his baseball coach, Henry. There was a roof over his head, but he took little comfort in that fact. He thought that he would never be able to love or respect his parents again. He thought that the recent Sundays he had spent in church with Henry would be his last – he was angry with God.

Life was challenging for Eddie from the beginning. Born in the South Bay area of San Diego, Eddie’s parents were both in and out of prison for most of his childhood. Drug use, thefts, and parole violations always seemed to send them back when they were released. Eddie and Starla were primarily raised by their grandparents, but sometimes one of their aunts temporarily sheltered them.

“Even though my grandparents tried to instill good morals in me, I grew up unstable and confused,” Eddie said. “I had a lot of anger and frustration. Already in elementary school, I was always getting into fights.”

Caring adults sometimes tried to help Eddie – there was his fifth and sixth grade teacher, an elementary school counselor, and baseball coaches, Roy and Henry, who invited Eddie into their homes and even took him to church. But the continual upheaval in Eddie’s life made it hard for them to make a difference. By middle school, he had a reputation for fighting and was constantly changing schools as he was shuffled between living with his parents, aunts, and grandparents.

By 13, Eddie was firmly headed down the same path as his parents. He was using drugs regularly and hanging out with kids who didn’t care about school. In eighth grade, Eddie got involved with a gang in San Ysidro and then, after moving again, with another gang in Imperial Beach (IB). He wasn’t allowed to walk at his eighth grade graduation because of his constant fighting at school.

His freshman year of high school was no better. Eddie sunk more deeply into the IB gang and was heavily involved in drug use. In addition to marijuana, he used cocaine, crystal, and acid. Except for during baseball season when he put in just enough effort to be eligible, Eddie failed his classes. When Henry, who was himself an ex-gang member, tried to reach out to Eddie, Eddie wasn’t ready to listen.

The wake-up call came Eddie’s sophomore year. He was kicked out of another school – Mar Vista High – for fighting, and he ended up first at Southwest High Learning Center and finally, by his junior year, at Palomar High School, the continuation school in his district. It was a last chance to catch up and salvage his education.

Eddie’s uncle was the principal at Palomar, and he offered to help his nephew catch up. At first, Eddie refused to listen, but after his uncle enrolled him in a drug rehabilitation program, Eddie began to change.

“I started to think about my future. I didn’t want to end up like my parents,” he said. “My grandpa said that a wise man learns from his mistakes, but a wiser man learns from the mistakes of others. I credit my grandpa for teaching me to be a man. He means everything to me. He’s my best friend in the world.”

When he started continuation school, Eddie moved from his half- sister’s house back to his grandparents’. He wanted to make his grandparents proud, and he finally began listening to Henry, his coach. Eddie started attending both sessions of the school day at Palomar (most students only attend one) and began going to church.

“When I first started seeking God, I was still messing around,” Eddie said. “But once I fully surrendered my life to God, I also fully gave myself to school. It’s like He changed me overnight.”

Eddie was 17 at the time, and he made dramatic changes in his life. Significantly, he realized he needed to forgive his parents – a big change from the night he spent smashing cars and hiding out at Henry’s. Eddie stopped using drugs and hanging out with his old friends. While some of his friends didn’t understand, some were happy for Eddie. They saw the change in him and were glad he was turning away from the life that entangled them all.

At the same time, Eddie went into overdrive at school. He took eight to 10 courses a day and caught up completely by the end of his junior year. He was able to return to regular high school for his senior year. Eddie said the administrators and teachers couldn’t believe how different he was. He earned all A’s and B’s, worked as an office assistant, and started a Christian club on campus. He was voted “Most Changed Student” in senior standouts and graduated on time with his class.

“It was one of the happiest days of my life,” Eddie said. “I don’t think anyone at graduation appreciated it as much as me.”

After high school, Eddie went on to community college where he won both academic and spirit awards. When he finished, Eddie wasn’t sure if he would be able to transfer or how he could afford to continue his education. He worked as a custodian for the South Bay Union School District for two years, waiting for his opportunity.

Around this time, Eddie’s younger cousin, Anthony, was now at his old continuation school, where he met Ronald Williams, who worked for PLNU. Anthony told Williams that he didn’t want to go to PLNU, but that he knew his cousin had always dreamed of going there.

With Williams’ help, Eddie applied to and was accepted at PLNU. At first, the prospect of competing with students he saw as especially smart intimidated Eddie. At New Student Orientation (NSO), his worries increased when he saw that most of the other students’ parents were there with them. Eddie wasn’t sure he could make it through college on his own, academically or financially.

Fortunately, PLNU’s associate vice president for enrollment, Scott Shoemaker, noticed Eddie’s distress at NSO and helped direct him to Pam Macias, director of financial aid. Eddie felt an immediate connection with Macias and found himself breaking down in front of her.

“She embraced me and encouraged me and prayed for me,” Eddie said. “Then she told me we would take things one step at a time, and she would be there for me. And she always has been.”

The support and encouragement Eddie received from Macias were only the first he experienced at PLNU. Soon, associate professor of sociology Dr. David Barrows awarded Eddie his first A of the semester for a research essay on social stratification.

Eddie recalls that Barrows then told him, “You have what it takes.”

Buoyed by the success and praise, Eddie’s insecurity began to diminish, and he began to believe in himself. When more A’s followed in courses on criminal justice and world literature, Eddie knew he was where he was supposed to be.

“What I love the most is that my department, dean, and professors have been there for me academically, spiritually, and personally,” he said. “They have prayed for me and been an iron rod in my back while I’ve been here.”

Sometimes Eddie was struck by the disparity between the two worlds he inhabited – the warm, academic surroundings at PLNU and the often hopeless, violent world at home where he watched cousins and friends struggle with the problems he had overcome.

“School became such a haven for me,” he said. “It was like paradise.”

After two and a half years, Eddie is graduating from PLNU with a degree in sociology and a concentration in criminal justice. He participated in Commencement in May and is finishing up his last class this summer.

Although graduating from PLNU is Eddie’s biggest achievement so far, his joy is tempered by recent tragedy. His beloved grandmother, one of the most consistent, positive forces in his life, the woman he calls “the most important person in my life,” recently suffered a stroke. The extent to which she will recover is not yet known.

The next step in Eddie’s life may be to apply to law school – though he worries about taking on additional debt. He’s also considering serving as a probation officer and trying to reach youth who are struggling the way he was. For now, Eddie is thankful for his education and for God’s grace in his life. Eddie’s parents have also both given their lives to the Lord, which brings Eddie joy.

“No matter what, I love my parents,” he said. “My experiences gave me my fighting spirit and taught me perseverance.”