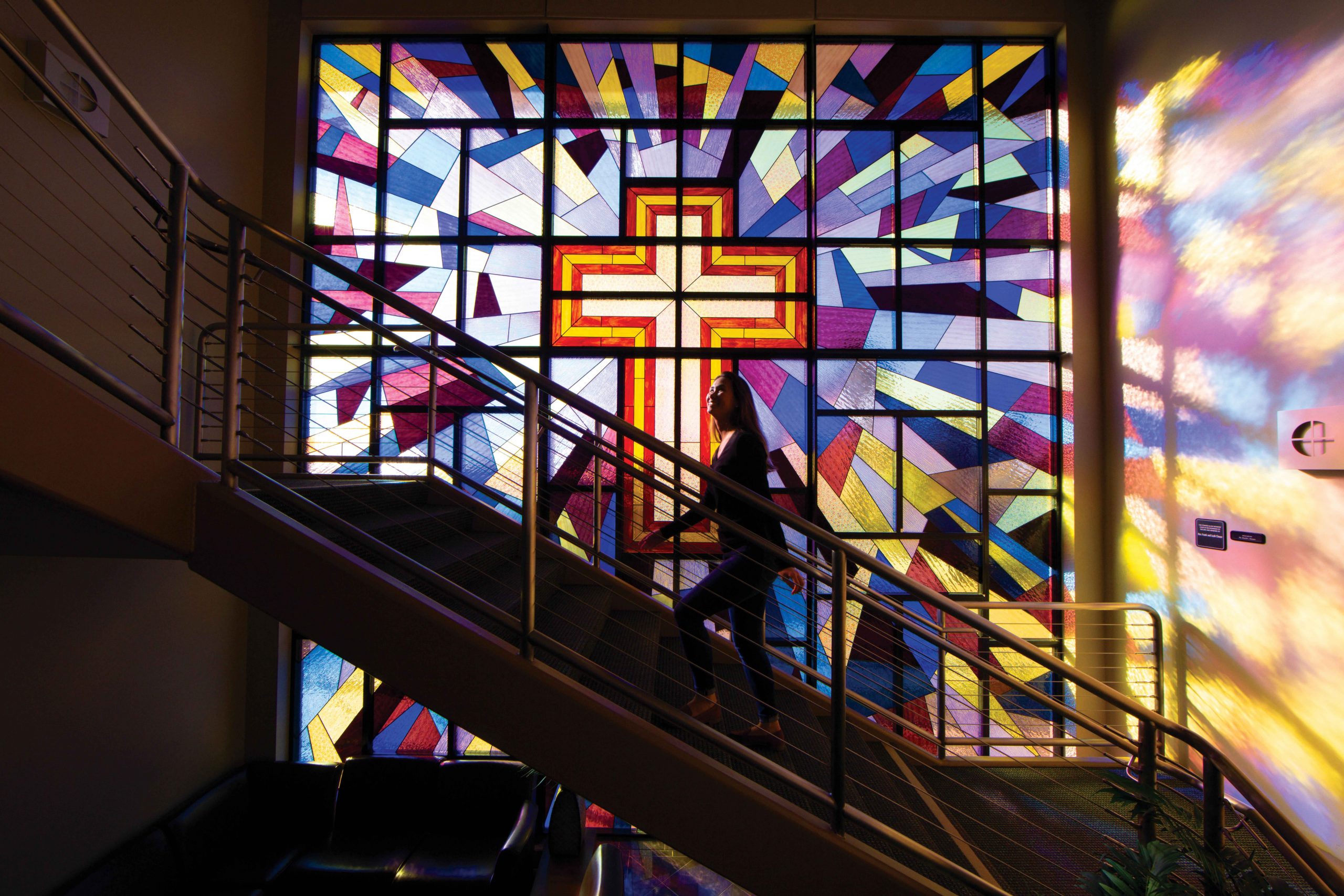 David Strawn, Ph.D., served as professor of mathematics and computer science at PLNU from 1971 to 2008. He was vice provost for international studies and dean of the College of Arts and Sciences. It’s hard to pinpoint his biggest legacy at PLNU — he helped shape the Department of Mathematical, Information, and Computer Science for decades, and his hand in advocating for PLNU’s study abroad programs has helped pave the way for PLNU students to study around the world. Perhaps his most lasting influence on PLNU’s campus, however, can be found in his stained-glass windows.

In the late 1990s, Strawn and his wife visited Epworth Memorial Church in Epworth, England, where he was enamored with the stained-glass windows. Imagining a nice stained-glass piece for his home, he returned with photos and a postcard of the chancel window to remember the designs.

Back in America, Strawn shopped for finished stained-glass pieces, but second-guessed himself after seeing the costs. However, a store attendant at Alpine Stained Glass — a custom glass and entryway design store that has since closed — advised him to try creating one himself. Alpine offered classes and had workshop space for craftspeople of varied experience levels. With Alpine’s guidance, Strawn started experimenting with glass pieces to create something of his own design.

As he practiced his new craft, friends began commissioning him to create pieces for them, including several stained-glass windows in Poway and Spring Valley, mostly for private homes.

“Doing stained glass became a personal project, kind of an avocation for me.”

Strawn explained that around the same time, Point Loma Nazarene College, as it was then called, began investing in artistic features for the campus. It began in 1997 with The Calling, a bronze life-sized version of Scott Stearman’s sculpture depicting Jesus’ calling of Peter. It was instantly popular, and Point Loma started seeking out other pieces.

“I was of the mathematics discipline as a professor,” Strawn explained. “Nothing in the art realm. But doing stained glass became a personal project, kind of an avocation for me.”

Even so, Point Loma reached out to him to commission several windows, all of which have become beloved parts of PLNU’s campus. The following is a historical tour of Strawn’s stained-glass works for PLNU and how they were created.

Strawn’s first piece for Point Loma was for the Wesleyan Center. Strawn felt that this was very fitting, considering Epworth Church, which originally inspired him, was the home parish for John and Charles Wesley. The Wesley brothers appear in Epworth’s chancel window, as well as John’s dying words. This window inspired the design for the two door inserts now in the Wesleyan center.

An early challenge Strawn had was that he only designed one pattern, but the Wesleyan center needed two. He eventually decided to use the pattern for both windows, flipping the image of the Wesley brothers in the second window. Although he had a capable plan and stunning reference point, creating the window was far from easy.

“The design and construction of these two windows is more complicated than any other piece I have built,” Strawn said. “The windows incorporate the painting and firing of many pieces and I had to find an ‘old time’ glass artist who would teach me that process.”

Strawn found another artist to paint John and Charles and explained that each hand-painted piece had to be carefully covered with black ground glass, which becomes part of the glass when fired. There were around one hundred painted pieces within the two windows. In one window, he used the words from the Epworth chancel window, “The best of all, God is with us.” In the other, he used the words from Charles Wesley’s poem, “Amazing love, how can it be.”

Strawn said that shortly after PLNU expanded to the Mission Valley campus in 2001, a financial gift helped a chapel to be built for students and faculty. It was named the Whitcomb Family Chapel in honor of a family with deep roots in the university.

During the renovation of the Mission Valley campus, the planners asked Strawn to build a stained-glass window for the chapel, which was a challenge since there were no external windows for the chapel. Consequently, no natural light could easily pass through. As a solution, he placed light fixtures inside the wall around the stained glass so direct light would shine through the piece.

The focal point of the piece is the cross and flame but also features a pattern of 18 red crosses in the background. The variety of colors displayed — yellow, red, and blue — sits together harmoniously, even with contrasting and overlapping shapes. The piece feels reverent and traditional, but also exciting and timeless.

Unfortunately, the light fixtures have burned out, and the wall behind the glass would have to be opened up in order for the lights to be replaced. However, Strawn believes the glass has colors and hues that are beautifully clear without backlighting. It remains a special visual feature of the Mission Valley Regional Center building.

Included here is Strawn’s retrospective account of the creation of Smee Hall’s immense and beautiful stained-glass window, which he wrote in August 2019. Strawn’s words beautifully detail how the piece came to be one of PLNU’s most iconic and beloved focal points.

“In 2007 planning and construction began on what would become the Smee Hall, the home for the School of Theology and Christian Ministry, the Wesleyan Center for 21st Century Studies, and the Center for Pastoral Leadership. In early planning and construction, the university received a gift from the Find Us Faithful Foundation in honor of Frank and Leah Clouse, a minister in the Church of the Nazarene. The gift was to provide for an art piece to be a part of the construction project.

Dr. Joe Watkins, [executive vice president], visited with me one afternoon and asked if I was interested in designing and constructing a stained-glass window for the building. When I indicated my willingness and asked for the size of the window, Joe indicated that it was 20 feet long and 21 feet high. I was shocked by the size of the project and commented that he was asking for a stained-glass wall, not a window. The project would require working with the architects of the building, structural engineers, and even the California Coastal Commission. It was certainly larger than any project I had built in the past.

I agreed to take on the project, and quickly realized that I would need assistance. I could not expect my neighbors to put up with semi-trucks delivering hundreds of pounds of glass to my workshop at home. In addition, I had no space large enough to lay out a full-scale drawing of the design. My distributor, Alpine Glass, agreed to assist with the space I needed along with crafts persons to assist with the construction.

My first task was to come up with a design. I asked the artist at Alpine to draw up two designs and I did the same. The four designs were shared with the building planners and one of my designs was selected. Initially, I planned to construct the stained glass ‘wall’ and place a steel cross over the outside as a part of the project. Before that plan was finalized, I discovered dichroic glass, which transmits one color and reflects a completely different color. Instead of using a steel cross on the outside of the glass, I used the dichroic glass for the central cross and many of the streaks emanating from it. I made the design so that all of the streaks or rays emanated from the center of the cross. That supported my theme that, ‘Life emanates from the center of the cross.’

Since a design that includes dichroic glass will look different from the front and the back, it was necessary to build a two-foot by three-foot model to coordinate the colors. The model was also used to illustrate the actual colors for the building planners. The model was also presented to Rev. Frank and Leah Clouse. Unfortunately, Rev. Clouse passed away before the installation of the large window/wall was completed. 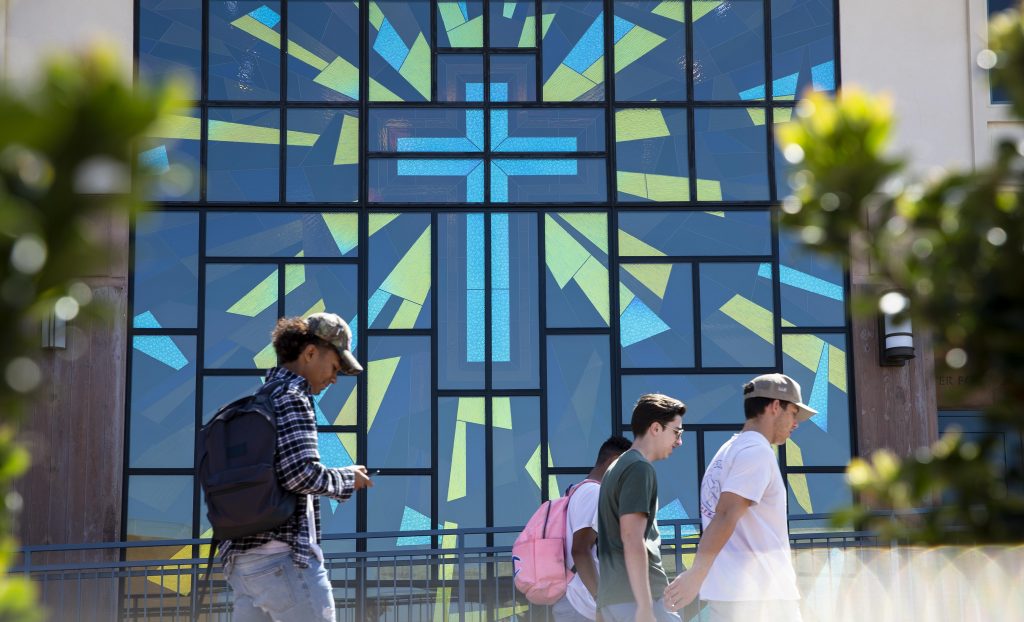 “Life emanates from the center of the cross.”

The architects worked with me in drawing up the steel frame needed to support the window/wall. Fifty-eight panels of glass would be used in the installation. Once the architects completed their structural engineering and the materials and size of the mullions, the design was drawn full size on paper. At that point it was possible to indicate the color of each piece of glass that was part of the design.

All of the panels were built in the Alpine Glass workshop. I constructed 13 of them with the craft persons at Alpine building the other 45. As soon as eight to 10 of the panels were completed, they were installed. A stained-glass installer, Garth Crawford was hired to install the panels.

Dr. and Mrs. Brower used a picture of the Smee Hall window in one of their Christmas cards. The message on the back of the card read:

This building was made possible by a generous gift from Gary and Debbie Smee and by the sacrificial gifts of hundreds of other donors and churches. The stunning stained-glass window was gifted by the Find Us Faithful Foundation in honor of Frank and Leah Clouse.

Life emanates from the center of the cross. That is the message that faculty emeritus Dr. David Strawn wanted to convey with his design for the window wall in the new Smee Hall. This piece incorporates dichroic glass, which has a transmitted color and a completely different reflected color. This unique glass creates an ever-changing array of colors, depending upon the angle of the view and the source of the light.”

With their rich history and loving craftsmanship, Strawn’s stained glass windows have graced PLNU’s campus for decades, and will doubtlessly bless generations of students to come.