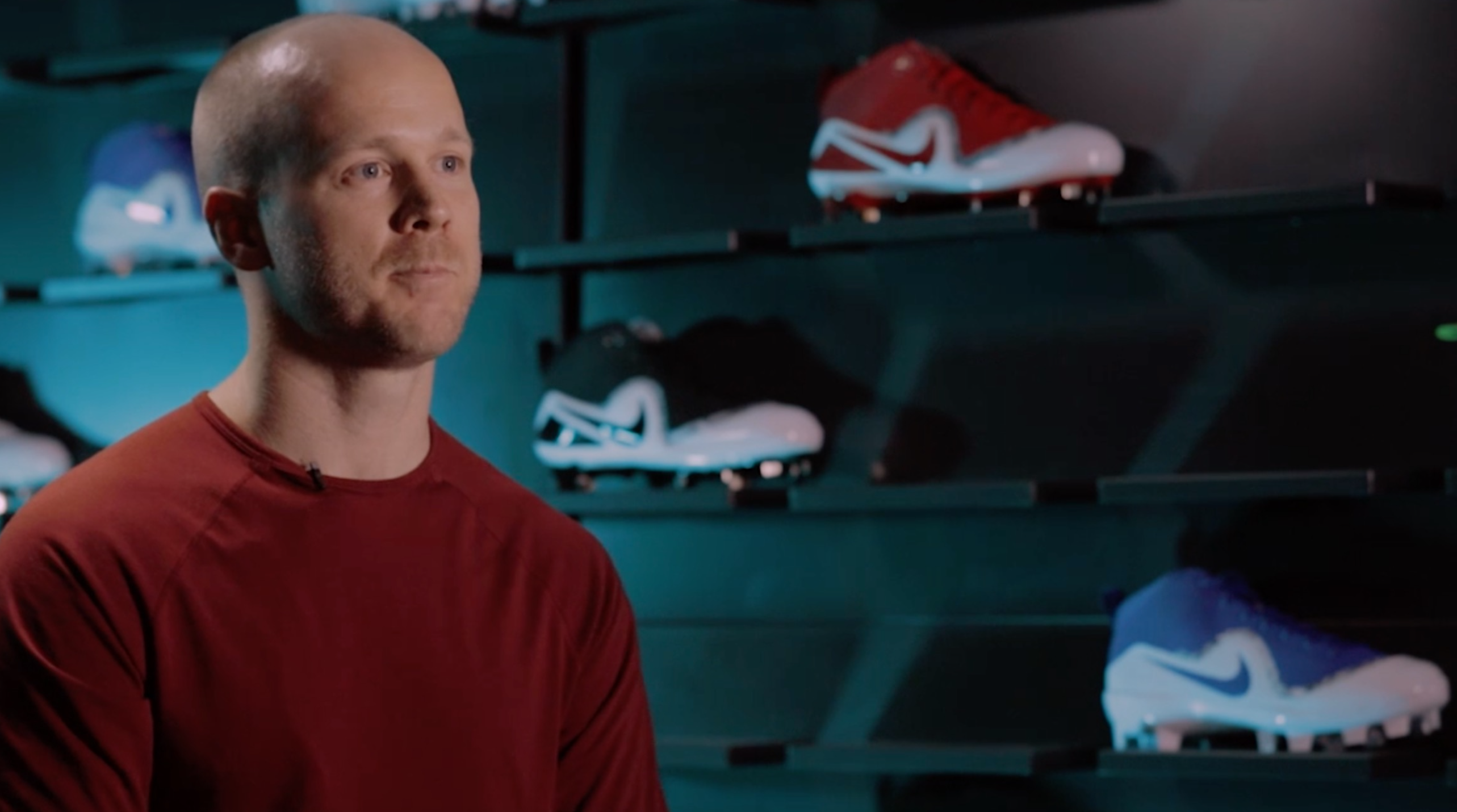 Home Topics Leadership & Business A Mile in Mike Ekstrom’s Cleats: How a former PLNU and Major...

“Feet are weird,” says Mike Ekstrom (04). The senior product line manager for Nike Diamond Sports and Olympic footwear has more than seven years of experience working for the footwear brand out of Oregon.

His job is to bring the right shoe to the right customers.

“I read every product review on Nike.com,” said Ekstrom, who’s also a former PLNU and professional baseball player. “I want to know if something is right or wrong for [our customers].”

Ekstrom works with all levels of athletes from professionals to children. He meets with some of the biggest names in sports like softball, baseball, men’s and women’s soccer, and football to solicit opinions and see prototypes in action before deciding on a product.

“It takes a thick skin,” said Ekstrom. “Those are the helpful conversations when athletes tell us what’s working and especially what’s not working with a shoe. It’s also the most fun part of the job.”

Ekstrom’s willingness to learn and experience new places has led him to work with some of the world’s most renowned athletes including Mike Trout, Cristiano Ronaldo, and Colin Kaepernick. And he credits a good portion of his ability to network well with high-profile athletes to his time in the business program at PLNU.

“Those are the helpful conversations when athletes tell us what’s working and especially what’s not working with a shoe. It’s also the most fun part of the job.”

“I remember coming to Point Loma [after transferring] and there was a business class and it was like a class of six people,” said Ekstrom, a self-proclaimed introvert. “And in a class of six people, you know you’re going to be called on … I took a really big jump in my confidence at that point.”

“My job is to identify the need,” said Ekstrom. “What does the consumer need, and how can we take it to a new place?”

Often, Ekstrom sees himself as the “voice of the athlete” to the shoe designers and developers, advocating for the consumers around him.

“If it doesn’t hit the mark, it’s on me because I kind of said this is the goal,” said Ekstrom. “Style and trends fall to the creators but I set the direction initially.”

Ekstrom has worked in this space long enough to know a good shoe when he sees one. But the journey to his current role took more of a circuitous path. Like many former professional baseball players, Ekstrom reached the end of his sports career in 2014 after nearly 10 years in the major leagues and was looking for the best way to parlay his athletic experience into a profession.

“I knew I was coming to the end of my career, not throwing as well, not getting as many people out,” said Ekstrom, who was playing in Italy at the time. “There’s always going to be somebody behind you newer, younger, faster.”

“There’s always going to be somebody behind you newer, younger, faster.”

So Ekstrom started sending out his resume and interviewing with firms while playing his final season. All told, he had two weeks off between the end of his baseball career and walking through the doors at Nike.

Moving forward, Ekstrom hopes to continue to influence the world of shoes by staying on top of consumer-athlete needs. Nike sells about two and a half million cleats per year and it’s Ekstrom’s job to sell them well.

Each year, Ekstrom’s team is restricted to a certain number of models. It’s up to him to determine how to best segment those models to work for the entire consumer-athlete population from pros to kids.

“It’s a matter of talking to as many athletes and consumers as possible,” said Ekstrom. “I think it’s learning what people are buying, what they aren’t. If we have a cleat that’s up and it’s five stars maybe something is right there.”

And while efficiency is the ultimate goal for Ekstrom, there are also moments when a shoe represents more than a tool or product.

“The best part of this job is being impactful and attaching stories and narratives to our products,” said Ekstrom, who recalled a particular moment at the 2021 MLB All-Star Game. Professional baseball players, coaches, and fanatics converged on Denver, Colorado, to witness the annual showdown between the best players in the American League and the National League.

“The best part of this job is being impactful and attaching stories and narratives to our products.”

Each year, Nike creates special cleats for the game with eye-catching treatments and finishes. This past year they created a cleat to honor baseball legend Hank Aaron who passed away in January 2021.

“He was one of the best to play the game,” said Ekstrom, who worked with the creative team to create a cleat with nods to all of Aaron’s former teams as well as a quote from Dr. Martin Luther King, Jr.

“None of that money goes to Nike,” said Ekstrom. “So in that case we’re creating a product, but the impact is much bigger.”

The final product definitely told a story. Feet might be weird, but that won’t stop Ekstrom from creating special cleats for athletes to share their unique stories and make an impact.

“We’re creating a product, but the impact is much bigger.”