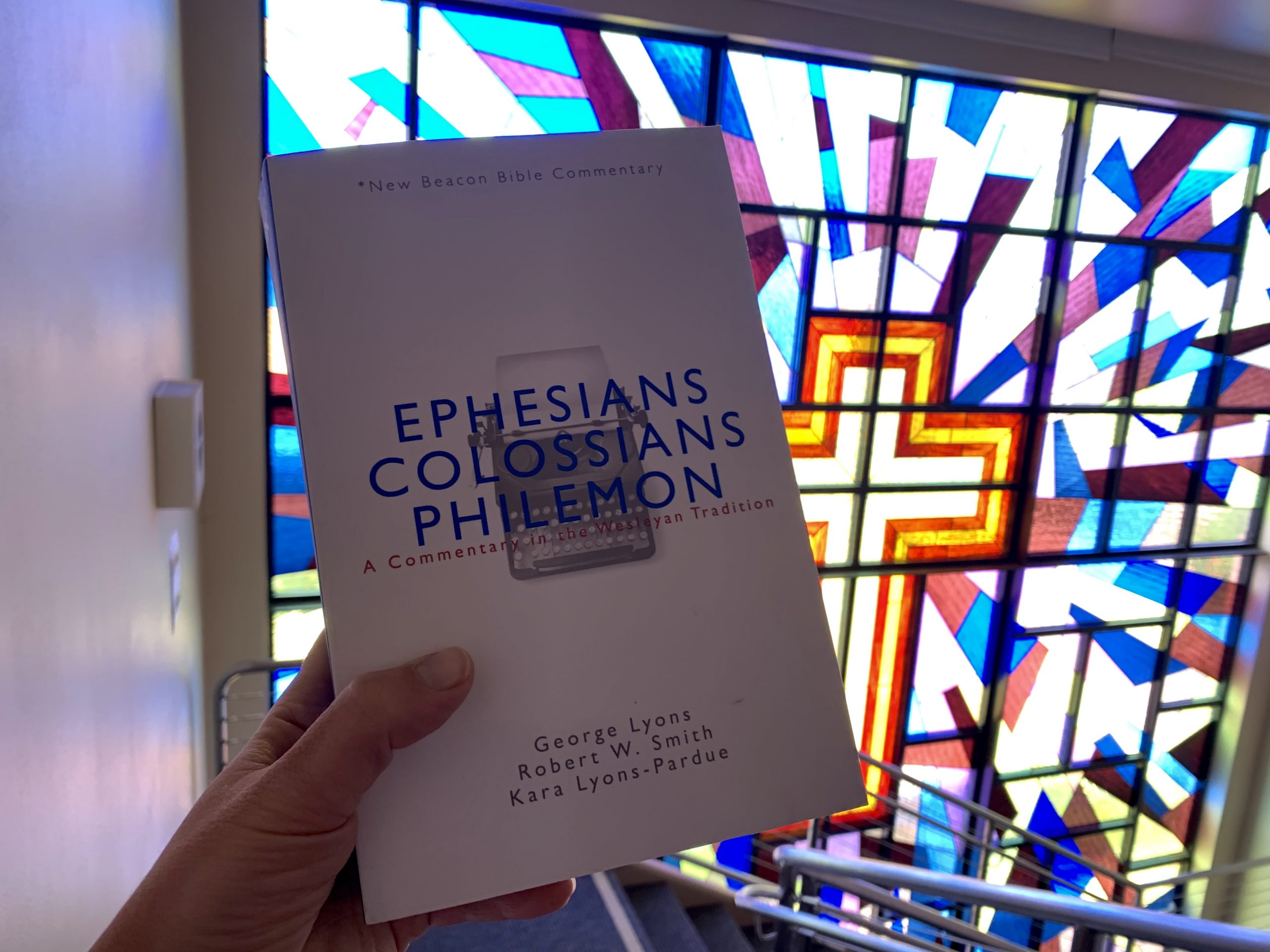 Was Paul ever sarcastic? Why might a seemingly private letter become part of the biblical canon? What can each of Paul’s letters teach us that will help us better understand our faith? And what do we do when we read something we don’t understand?

These are the sorts of questions the authors wrestled with as they wrote New Beacon Bible Commentaries’ Ephesians/Colossians/Philemon: A Commentary in the Wesleyan Tradition. The new commentary is tied to PLNU not only because two of the authors are university faculty but also because PLNU students’ questions helped drive some of its content.

Lyons-Pardue was the author of the Philemon portion of the commentary. Though her speciality is usually the Gospels, her interest in Philemon was piqued by a discussion with her students. Lyons-Pardue assigns students in her general education classes to read the entire New Testament as part of their coursework.

For many students, her class is the first time they have encountered the New Testament in its entirety. Because of this, students often bring new questions and fresh perspectives to books she has studied for many years. This is exactly how her deeper interest in Philemon began and what, ultimately, led to her writing that portion of the commentary.

“The commonly-held backstory on Philemon is that it is a private letter to a slave owner [Philemon] whose slave [Onesimus] has run away,” she said. “At the penalty of death, he is being sent back, but now as a Christian, and Paul is pleading for his life.”

As a particular group of Lyons-Pardue’s general education students read Philemon, one student asked a question that caught her off guard.

“There is this line in verses 15 and 16 that talks about Philemon and Onesimus being brothers ‘both in the flesh and in the Lord,’” she explained. “A student asked me, ‘Were they actually brothers?’ I have never thought about it this way. At first, I was going to say, well, no, but then I  dug into the Greek and considered that, like in the U.S. South, slaves and slave owners often had illegitimate children. We don’t know the answer, but his question was provocative and possible. It pointed out to me that we make a lot of assumptions when reading.”

“We can read a book like Philemon and ask: Why is this part of our Scripture?” Lyons-Pardue questions, “How is it shaping the idea of a radical and accepting Christian community?”

Lyons-Pardue believes studying all the New Testament books with students is important — not only because of specific, thought-provoking questions like the one about Philemon — but also because all of Scripture is confessed to reveal God to us.

“We can read a book like Philemon and ask: Why is this part of our Scripture? What seems to be a private letter (though actually addressed to Philemon’s entire Christian community) is held onto by the early church. Why? Paul is making this really big demand of Philemon here — how is it shaping the idea of a radical and accepting Christian community?”

Studying the full breadth of Scripture helps students wrestle with useful and demanding questions like these.

“Every time, it is a wonderful journey to reinvestigate,” Lyons-Pardue said.

For his part, Smith was interested in writing the commentary on Colossians in part because scholarly thought on the book has changed during his lifetime.

“[The book of] Colossians holds an interesting place in Pauline studies,” Smith said. He explained that for a number of years, some scholars wanted to deny Paul’s authorship of Colossians; now, he says, there is a new interest in recognizing Paul as the author. “I was intrigued by that.”

Smith said Colossians is an important book in terms of defining Paul’s Christology and conveying his understanding of who Jesus is to his readers. “Colossians emphasizes Jesus’ significance as one who was the image of the invisible God and one who shed His blood to reconcile humanity,” Smith said.

For Smith, one of the enjoyable parts of working on the commentary was being able to view the letter as a whole.

“So often chapters and verses make us look at it in sections,” he noted. “I enjoyed viewing the book as a whole piece.”

Though it was enjoyable, the work did involve challenges.

“You have to ask yourself, am I letting the text speak, or am I trying to speak for it?” Smith said. “There are also some confusing theological points in Colossians related to the idea of the Holy Spirit and the sense of a spiritual resurrection. Some of these can be made sense of, but they can’t be completely solved.”

These challenges, however, are part of what both Lyons-Pardue and Smith feel make studying the Bible worthwhile.

“Bible study is hard, to really read Scripture and to encounter it,” Smith said. “But I would hope that we could see a real revival of Scripture in and among our churches. I would like to think that if a person was well-informed about the Bible, they could pick this [commentary] up and use it, but I saw myself as writing for a pastor who wanted to take this to the people.”

“You have to ask yourself, am I letting the text speak, or am I trying to speak for it?” Smith said.

“Some historical questions aren’t solvable, and we can’t always know for sure,” Lyons-Pardue said. “I do wish Christians would read all the nooks and crannies of the Bible and not just their favorite parts, favorite books, their life verse, etc. Reading the fullness of the biblical text puts us out of the place of authority. We are not the ultimate deciders.”

The humility Lyons-Pardue and Smith profess as students and scholars of the Bible is not something they see as a burden but as a blessing.

As professors, Lyons-Pardue and Smith have the opportunity to help students encounter the whole collection of Christian Scripture — both the familiar and the less familiar passages. Through this commentary, their other projects, and their teaching, they will continue to ask questions, seek insights, and approach Scripture with faith and humility.

Related story: Dr. Brent Strawn on “Rethinking the Bible as the poetry of God.”