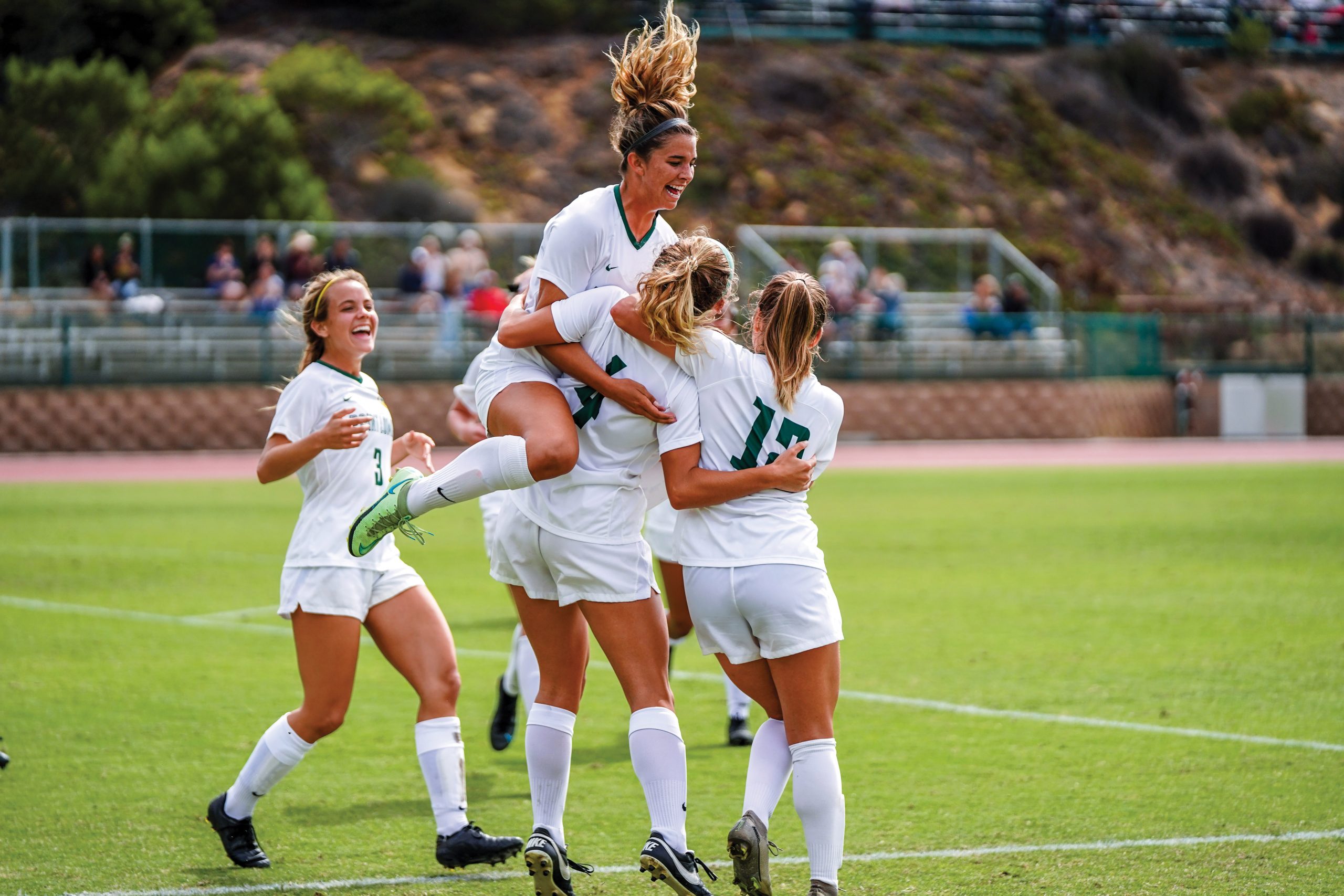 Home Topics Voices of PLNU A Tradition of Success Not Defined by Division: How Loma Athletics Culture...

Others would look to finances. How does the program manage its teams, budgets, salaries, and scholarships? Logically concluding the best teams probably have the most money to finance their gear, staff, and nutrition.

And still, others would argue the best athletics programs at the college level come down to the people: the coaches, the administration, the campus community, the players on the bench who will never see a minute, and the starters who play every game. They’ll say look to the facilities staff not the facilities to take the measure of a program because it’s people who beget culture, and properly harnessed culture has the potential to push athletes to higher success and transcend divisional boundaries.

“I could be going to school for free somewhere else, but I don’t regret my decision at all,” said Point Loma Nazarene University women’s soccer student-athlete Bethany Arabe.

The sophomore biochemistry major’s decision to play for Loma women’s soccer came at the expense of Division I offers at larger schools with bigger programs. Ultimately, the culture of the women’s soccer team and the program’s tradition of success made the decision an easy one.

“Loma checked off boxes that I didn’t even know I had,” said Arabe.

“Loma checked off boxes that I didn’t even know I had.” – Bethany Arabe, women’s soccer

The PLNU women’s soccer team has one of the best and most consistent records on campus. Over the last decade the team has won the PacWest championship five times. The team’s accolades decorate the trophy shelf along with myriad individual honors for players like Arabe, Lauren O’Malley, and others.

“The intensity of our program is as high if not higher than some Division I universities,” said O’Malley, who earned PacWest Defender of the Year for the 2021 season.

The senior exercise sports science major returns for her fifth year next fall as a center defender.

“We take it so seriously,” said O’Malley. “The level is so high and everyone is on board.”

“In our particular program there is a willingness to demand much from each other,” said head women’s soccer coach Kristi Kiely. “Parallel to that is caring about one another deeply.”

Kiely and other coaches at Loma know the gap between high-performing DII teams and lower to mid-major DI teams is marginal at best. It comes down to the opportunities.

“Most players going DI will never get the chance to compete in a championship,” said head men’s basketball coach Matt Logie.

Since joining the Sea Lions, Logie has consistently guided the team to winning records including a PacWest championship.

“For our program, we focus on four core values,” said Logie, “trust, love, commitment, and servanthood. I believe that’s how you build great relationships.”

Four pillars that shape each and every athlete in Logie’s program. Beyond their continued commitment to each other, they are also committed to their peer teams on campus.

“I try to go to as many games as I can just to support other teams,” said rising junior Luke Haupt. “It’s a small campus so we all know each other. You’re there telling them good job after [a game] and good luck before.”

Haupt, like the rest of the class of 2020 high school athletes, experienced one of the most unique recruiting years in college history. In a typical year the NCAA allows high school athletes to go on one official visit and multiple unofficial visits to a college campus. Recruiting is a very nuanced process with the NCAA regulating almost everything in an effort to make the process equitable for all athletes.

In a year with COVID-19, however, many high school athletes were dealing with added barriers. Most official visits were canceled and unofficial visits were highly limited due to travel restrictions. Athletes like Haupt had to rely on conversations over the phone and texts with coaches to make their decision on where to play.

“It was blind trust based on what they’ve done,” said Haupt. “All I could do was call and text coaches … it was a little terrifying.”

But Haupt has never regretted his decision.

“We actually enjoy being around each other,” said Haupt.“It’s not just go to practice and go our separate ways. We go to the caf together, and we’re always over at each other’s apartments and houses.”

Finding the right alignment with a university is difficult, but Haupt and the rest of the men’s basketball team certainly have the record to prove that they’ve bought into the culture.

“I’ve always told my staff that we’re recruiting above our level,” said Logie, who’s not only interested in top-level student-athletes but also mission and academic fit when he’s on scouting trips.

A difficult message to digest when the lights of the NCAA Division I university shine on long legacies, lucrative contracts and scholarships, and pristine athletic complexes. The vision is alluring for most high school athletes planning to continue their careers. But it doesn’t always add up in the everyday routine.

In the last decade, the NCAA DI men’s basketball championship has been won by a Power Five conference school every year except for one. The Power Five conferences include the Atlantic Coast Conference (ACC), The Big Ten Conference, The Big 12 Conference, the Pac-12 Conference, and the Southeastern Conference (SEC). The universities in these conferences make up some of the wealthiest in the nation and have all of the trimmings and trappings that come with bulging budgets and are just short of a guarantee on bids to the championship tournament each year. It follows that the rest of the Division I teams come up short pretty consistently.

“Sometimes a lower level Division I team will win,” said Logie. “And there’s a chance for an upset, but that’s a unicorn. More often than not you’re going to have experiences that vary. When it comes to day-to-day experience, you lose and that’s not very fun.”

“At Loma you have the option to win 25 games and to compete for a championship every year,” Logie continued. “And we have yet to have a student come and not love it here.”

Student-athletes like Kaden Anderson are a perfect example. PacWest Player of the Year adds the latest gilding to Anderson’s ever-growing list of accolades. Consistently in the double figures in games, Anderson has no shortage of opportunities to explore other universities in Division I.

“A lot of people get caught up in going DI,” said Anderson. “They probably know they won’t play, but they accept the offer.”

“It’s not really about the level for me,” said Anderson. “We can beat DIs, we’ve proven that. I don’t owe anything to a DI. I want the best fit for me and what’s going to give me the best opportunity to move forward.”

Coaches committed to a family atmosphere and athletes committed to driving each other to be better athletically have invaded Loma athletics culture, making it the best place for athletes like Anderson to stay and continue working on their craft.

In a historic exhibition game at the start of the 2021-22 season, Loma men’s basketball hosted Division I neighbor Pepperdine University, winning with a final score of 77-50. They led by as many as 29 points during the game.

“You hear about successful Division I programs doing that but with less of a concern for the whole person. We care about the whole person; that’s what makes our program unique.”

“We were playing a conference game and after the game, one of my players was talking with one of our opponents, and the opponent asked ‘How do you keep winning?’ and our athlete said ‘We hold each other accountable. All of the time,’” said Kiely. “You hear about successful Division I programs doing that but with less of a concern for the whole person. We care about the whole person; that’s what makes our program unique.”

“Our team here is unlike any other team I’ve been on before. We talk about it all the time,” said Schmidt. “It’s rare to find a team that gets along as well as we do, and my teammates are my best friends.”

“I wasn’t interested in over the top facilities,” said Schmidt. “I want to play for a competitive program and be happy.”

Loma athletics certainly delivers on competitive programs. Women’s soccer ranked in the first PacWest championship of the 2021-2022 season along with multiple individual and team awards. Men’s basketball won the PacWest championship with Kaden Anderson earning PacWest Player of the Year.

And perhaps most notable, baseball ended the 2022 season as National Runner Up in the DII College World Series after winning the PacWest championship riding one of the most historic runs in team history. Accolades for women’s tennis, men’s soccer, women’s volleyball, and other teams only lend further weight to the suggestion that success at Loma athletics starts from the top down.

“We have no issues off the field, they’re excellent students,” said James. “The type of person in our program loves to work hard. If I didn’t work them hard, they didn’t like it. And then we had the support of the community behind us and [the players] really wanted to do well for them. Now the name and the brand is out there and getting a lot of attention.”

“I’ve always said ‘why not’ about our programs,” said Athletic Director Ethan Hamilton. “Why not Loma? Why can’t we be the best Division II university? I think we can.”

Hamilton has a long history with PLNU starting from his time as a student to his work with the men’s basketball team as a coach and now to his position as athletic director. He bleeds green and gold and knows how to hire men and women who can continue creating the culture that Loma student-athletes are known for.

Former men’s basketball student-athlete, Sterling Somers (20), would certainly have to agree. As someone who played for both former head coach Ryan Looney before current head coach Matt Logie, Somers has seen firsthand a successful change in leadership.

“Ethan does a great job,” said Somers. “Having our leader set the tone for every program … everyone is striving for greatness and the hires are awesome.”

“I was lucky enough to be close to both coaches and I loved both programs,” said Somers. “Even though I only got one year with Logie … what he did with that one year really resonated and we all bought in.”

A PacWest championship speaks to the success of Logie’s approach as head coach, but that’s not necessarily what Somers focuses on when he talks about his experience.

“It starts with the school as a whole,” said Somers. “We have a great athletic program, and that stems from the coaches we hire and the culture we build. Top to bottom it’s a really special place to be.”

Committed to each other and their programs, Somers and other athletes like him have graduated from Loma’s programs and still communicate the deep care blended with fierce competition they experienced during their time as student-athletes. And while the secret behind this small, private Division II university’s success may never be totally quantifiable, it’s certainly describable and pervasive among all of its student-athletes.

“Maybe I am a little greedy to think we can do it all,” said Hamilton, reflecting on the success of Loma’s teams. “But I think you can have good team and individual success, get a degree, grow in your faith, and look back and say my four years at Loma were the best in my life.”

Evidence suggests multiple athletes, current and graduated, would have to agree.