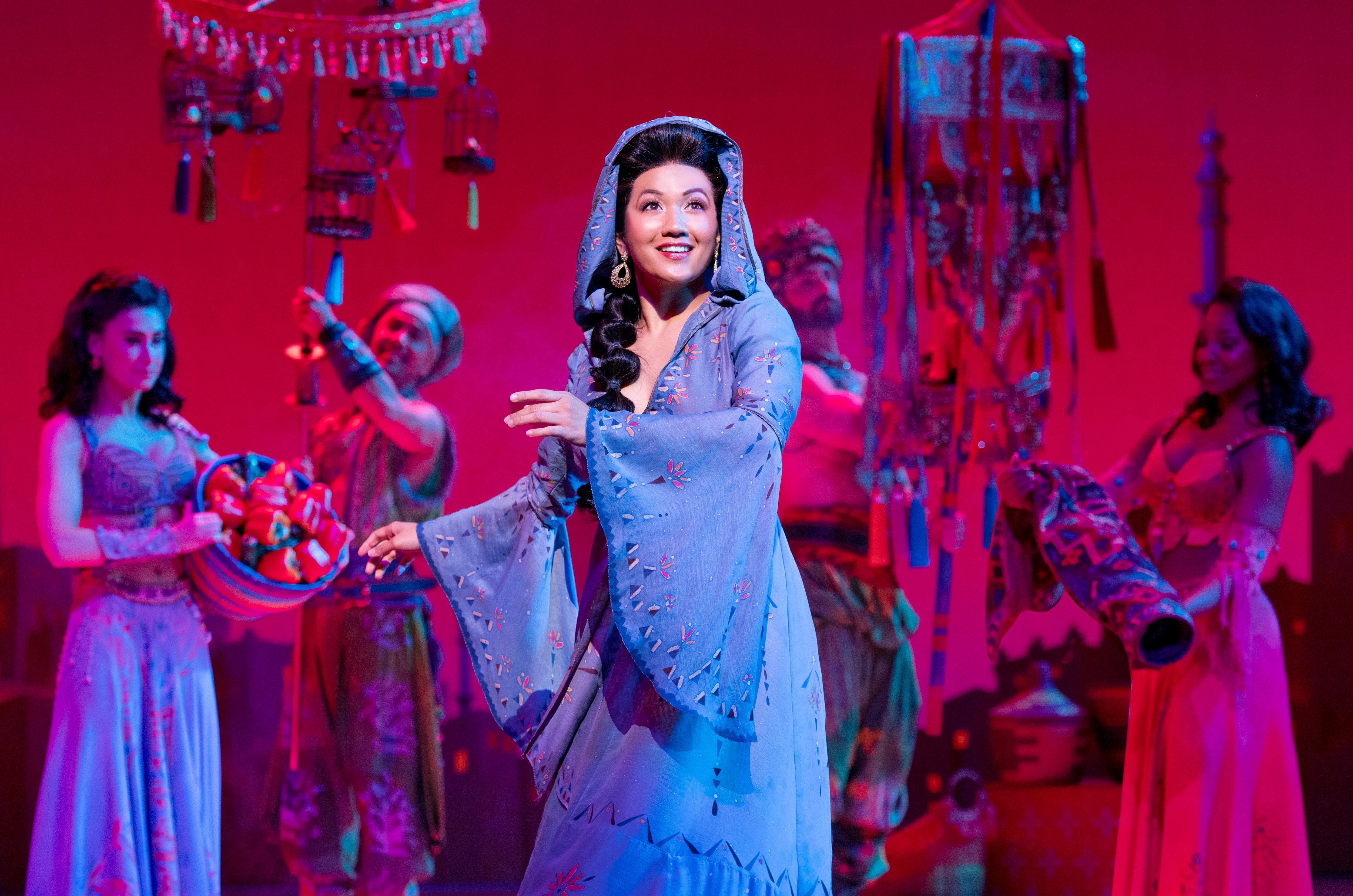 When arts teacher Kaena Kekoa (18) landed the role of Jasmine in Disney’s Broadway production of “Aladdin” on its North American tour, she knew she was in for a year of new adventures. A native of Oahu, the most Kekoa had ever traveled prior to her national tour callback was to San Diego to attend PLNU. And now, just over a year after graduating she’s made her professional theater debut in the principal role of Jasmine.

“You know how people say they have island fever and feel trapped living on an island? Yeah, that was never me,” said 23-year-old Kekoa laughing to herself. “I’ve never had a yearning for traveling, and I did not need to leave.”

As the daughter of two musically gifted parents, Kekoa always felt a natural pull to music and arts. She spent her childhood singing with her family and learning to love music. Her first explorations into theater were as a performer at her local Nazarene church where she fell in love with the stage and storytelling.

“It was very nerve-wracking for me, but it helped me get out of my shell,” said Kekoa. “That was my first time experiencing what it was like to share a gift that God has given me.”

As she grew in her musical knowledge and gained experience backstage during high school productions, Kekoa started looking at arts schools to continue her education in performing arts. But after exploring the many options, she found that the community she needed was at PLNU, prompting her to leave her island home for the mainland and major in teacher education.

“I had my heart set on an arts college,” said Kekoa. “I was going to do shows and tell stories, but that wasn’t God’s timing for me.”

Each semester, Kekoa would tick off more courses for her teacher education major while participating in productions at Salomon Theatre whenever she could. In between memorizing lines and learning to read music, Kekoa studied for tests on children’s literature and differentiated mathematics.

“There were definitely days where I would sit in my dorm and wonder: what am I doing here, why aren’t I studying theater, and why aren’t I in more shows? God, you gave me this gift, but what’s happening?” said Kekoa.

“She has a rare gift in communicating music on a platform,” said Jackson, who has spent 40 years teaching, practicing music, and conducting. “It’s simply her personality; what she is on stage is exactly what she is off stage.”

And yet she never wavered in her studies or her stage presence, and her ability to take a script and bring it to life was something choir director and vocal performance teacher Dan Jackson, D.W.S., noticed about her from the very beginning.

“She has a rare gift in communicating music on a platform,” said Jackson, who has spent 40 years teaching, practicing music, and conducting. “It’s simply her personality; what she is on stage is exactly what she is off stage.”

Humility in the performing arts is not a common quality, Jackson noted, but in his experience with Kekoa, it was a part of her storytelling.

“I grew in my craft in college because of teachers and mentors like Megan DeBoard and Dan Jackson,” said Kekoa. “Being a part of the music department helped grow my perspective of music and theater, and if I hadn’t been practicing it for four years there, I wouldn’t be here doing this tour.”

Now in her second month on the tour, Kekoa is seeing new cities at a rapid pace. She is focused on enjoying her time on stage and maintaining a faith-driven perspective in her career.

“It’s all in His timing,” said Kekoa. “I’ve lived the dream for at least a year and that would absolutely be good enough for me if that were it. If He wills it, then we’ll keep going. That’s the mindset I have.”

Kekoa’s Nazarene roots created a deep sense of prayerful decision-making that can be traced throughout her time in theater. For her, performances have always been for an audience of One, and auditions are just another opportunity to display her giftings.

“The only thing I was doing was praying,” said Kekoa as she described showing up for the open call auditions for “Aladdin” and “The Lion King” in Honolulu.

“Being a part of the music department helped grow my perspective of music and theater, and if I hadn’t been practicing it for four years there, I wouldn’t be here doing this tour.”

She hadn’t even planned on auditioning but was convinced by friends to try it. She submitted her resume with a headshot she took in her backyard.

“I was there for fun … I went in with no expectations,” said Kekoa. Three callbacks later, she was on a plane to New York for a work session with Disney’s theatrical producers.

“And I blew my work session,” said Kekoa, chuckling to herself. “My voice cracked, and I didn’t know how to deliver any of my lines. I went in to the callback just thanking God for the opportunity to perform because it was one of the greatest experiences.”

Related Article: What’s it like to be the resident director of the Broadway play, Hamilton? Ask PLNU alum Hannah Ryan!

A few days passed and Kaena Kekoa’s name was added to a list of new performers set to join the national tour. She would be making her national tour debut in the principal role of Jasmine and leaving a world where she was comfortable to experience theater in one of the most intense environments.

“There are all of these elements that make it different when you’re performing on the road,” said Kekoa. “Going in to all of these different cities, I have to find all the different things I need to stay healthy and keep my body in the right place so that I can do my job.”

She would be making her national tour debut in the principal role of Jasmine and leaving a world where she was comfortable to experience theater in one of the most intense environments.

Grocery shopping, laundry, and working out are just a few of the normal activities that become exponentially more difficult on tour. In this environment, performers often have only one day off from shows where they have to balance between exploring a new city and finding a Trader Joe’s. For Kekoa, there’s an added level of discovery. She always looks for a church to attend.

“Being in this business, I didn’t think I would be able to find someone who had the same views and morals as I do, but, surprisingly, I have,” said Kekoa. “There’s another principal cast member who I have been able to confide in, and in each new city, we go out and try to find churches to attend.”

“There are a lot of different personalities on the tour,” explained Kekoa. “But we’re all committed to the family aspect and making this group feel like a home away from home.”

By this time next year, Kekoa will have visited nearly 20 cities, more than she’s seen in all of her prior years combined. Throughout this experience, she’s staying focused on the next show, the next song, and the next dance in Jasmine’s 12-pound Swarovski wedding dress.

“I’m going to play out the year and see how I like being on a national tour, and if it’s something I do love, I’ll pursue it,” she said. And with a quiet confidence, she added, “But I know it’s all in His timing.”

Talk to Me: Dean Nelson on Better Conversations