As I write this, it is almost Daniel’s homecoming day. Twenty years ago, on August 21, 1992, our son Daniel Nam Moon Blessing arrived in the United States as a four-month-old South Korean infant.

Twenty years have passed in the blink of an eye. Daniel is now a PLNU junior, tall and muscularly slender, almost unrecognizable from the peanut of a baby we first met, who at 12 pounds at four months had been premature and developmentally delayed but was still the most beautiful child I had ever seen. Thinking back to that arrival day, I am flooded with memories of the best decision my husband, George, and I have made during our 34-year marriage: the decision to adopt internationally.

In writing this, I relive the moments of anxiety and excitement. The diaper bag slung over my shoulder felt heavy and unfamiliar to me as I shifted my weight from foot to foot; the hard-tiled airport waiting room floor was making my back ache. Standing there, my eyes darting back and forth between the ramp down which our baby was to be escorted and my husband and friends who were waiting across from me, my thoughts focused on the adoption process that had begun one year before. George and I had written our autobiographies, been checked by social workers, and were finger printed and certified by the F.B.I. not to be felons. We had gone through a lot of self-examination to arrive at this position of being expectant parents. Though we had considered being a childless professional couple, working with young people but not parenting our own, we had both experienced a growing feeling that we wanted to share our lives with a child and each other, and it was God’s will that we do it in this way. This process for us was not second best but our first choice in growing a family. 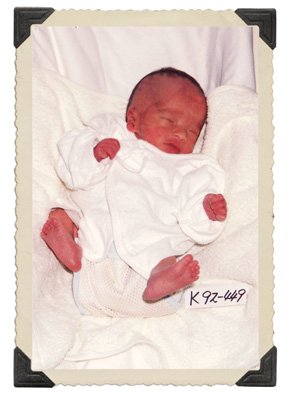 The hastily packed diaper bag I clutched bore witness to the swiftness of the actual adoption assignment, as it had been thrown together that morning, with many of the contents purchased only the day before. The day we stood at the airport came at the end of an incredible week in which, on Monday at 2 p.m., our social worker had called to tell us that our baby would be arriving from Korea that Friday, three months earlier than anticipated.

I nudged the woman next to me who was blocking my view of the arriving passengers and glanced over to see our minister raise his video recorder to his eye to record this different kind of birth. The adoption agency escorts were moving down the ramp carrying five Korean infants. A baby girl, her head covered by a thicket of wiry hair, was first, followed by two other children. Then I saw a basketball player-sized, white-haired man carrying two babies in his arms, one of whom I knew to be my son. Although he little resembled the newborn photo I carried, printed with the name “Kim, Nam Moon,” the name his case worker had given him, something inside told me he was mine. Racing my five-foot tall frame down the slippery floor after the giant, I yelled, “That’s my baby! That’s my baby!” I reached for the child’s arm band and saw our last name, “Blessing,” typed there. As I held him for the first time, I asked the tiny boy, “Is your name Nam Moon?” He smiled, and I knew we were parents.

People sometimes wonder why we adopted internationally. There are so many misconceptions about international adoption, the most common one being that it involves buying babies. Holt Children’s Services International, the agency we used, is a Christian organization founded by Harry and Bertha Holt during the Korean War to find homes for abandoned Amerasian children. Harry Holt petitioned the U.S. government to allow Americans to adopt children from Korea, and the agency has grown to include many other countries in its adoption work. The ethical standards of the agency are impeccable, attested to by the rigorous screening to which we were subjected. There are other reputable agencies as well, and the Hague Adoption Convention established even higher standards in 2008 for inter-country adoption. Its preamble states: “The Child, for the full and harmonious development of his or her personality, should grow up in a family environment, in an atmosphere of happiness, love, and understanding … Intercountry adoption may offer the advantage of a permanent family to a child for whom a suitable family cannot be found in his or her State of origin.” Although current U.S.-international adoptions have decreased to around 9,000 a year from almost 23,000 in 2005 (adoption.state.gov statistics), there are still children waiting for permanent homes. 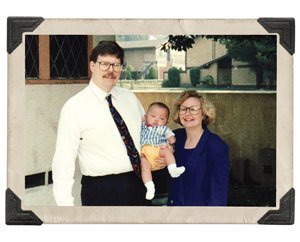 For George and I, there are a few reasons why we chose international adoption. While I was in graduate school, I had been on staff at our Nazarene church as lay youth pastor, working with junior and senior high Chinese students. They were largely first generation American born, and my husband (who drove the dilapidated church van) and I spent so much time with them that some began calling us “Mom and Dad,” which was somewhat amazing, as we were pale white folks in our late 20s. My cousin Ruth had also adopted her daughter, Kristin, from South Korea many years before. I had learned of the difficulty of fatherless children in Korea, a culture strongly influenced by Confucian practices of bloodline reverence, leaving nameless and ostracized those who did not have a legitimate father and discouraging the practice of adoption within the country. But a larger factor was my reading of the New Testament. Here was an account of Christ enlarging the meaning of family beyond the biological, as he said, “Whoever does the will of my Father are my mother and brothers and sisters,” when asked if his family was present. Here was Paul telling us that God has adopted us all as His children.

As we celebrate Daniel’s homecoming day, we know we are part of an international family made not by blood but love.

Dr. Carol Blessing is a professor of literature at PLNU.