Home Topics Voices of PLNU Alum Cody Jung rides his bike all the way to the Tokyo... 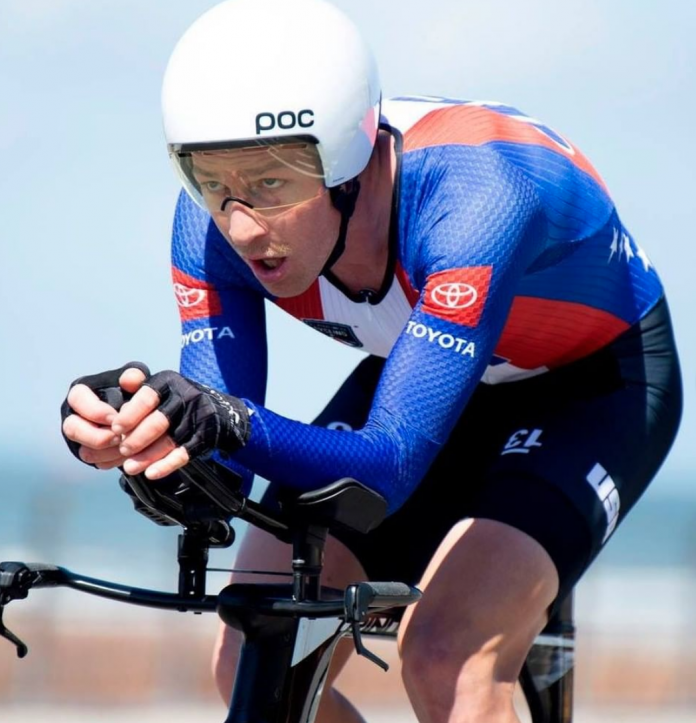 This is the typical work day for Cody Jung (14). As a Team USA paracyclist, Jung devotes an average of five to six hours a day to active training not including his recovery time and additional activities that ensure his body is in prime condition for the next day. His average ride on the bike is a sustained three to five hours, depending on the workout, and then he does strength training exercises two to three times a week in the gym. For some athletes, a schedule like this might mean minimal time spent with family, but Jung tries to get the most out of his days and get quality time with his wife and young daughter. Some days, it means he gets out of bed a little bit earlier to have breakfast with his wife, Evelyn (13), who works as a nurse full-time. Or it might mean Jung plans his recovery breaks for a time when Emi might be taking her nap. From stretching, recovery, fueling, walks, weight workouts, or an occasional bike ride, Jung finds a way to incorporate his family into his work day and involve them.

But Cody Jung was not always planning on cycling full time. Jung began taking road biking seriously in college. When he first graduated from Point Loma Nazarene University, he was unsure of where life was going to take him. As things took off for him in cycling, he started to entrust the process to God. As Jung was working on a master’s degree in Teaching English to Speakers of Other Languages (TESOL), he was training, racing, and working at a bike shop. The job at the bike shop helped Jung learn technical skills with road bikes. While cycling was always a passion of his, this job brought him more practical knowledge as he was surrounded by bikes and helping customers out with their issues with bikes. As he was completing the program and teaching, Jung was competing at a national and international level. In 2018, his second time being invited to the world cup in Belgium, Jung won a silver medal in the time trial and caught the attention of the national team.

This shift in his cycling career led Jung to quit teaching and pursue competing as a full-time job. The schedule Jung sticks to is a busy one, proving that even now as a full-time job, being successful at road biking requires hard work and dedication. Jung faces life with a certain bravery that exists in people who are destined to accomplish great things. Despite bike crashes, the physical restraint, and the pandemic, Jung continues to impress.

“The more you race, the more likely you are to crash,” Jung said. The chances of getting hurt in road cycling or in life are real, but Jung thinks that the chance is worth it.

Jung cites his mom and dad, Kelly and Brian, as being a huge part of where he is now. Brian and Kelly had a desire to see how far their son could go after Cody was diagnosed with cerebral palsy (CP) on his left side. The doctors let Brian know that Cody might never play sports like the other kids, with ease and catching on as easily. In fact, Cody might never be able to participate in certain physical activities. But this news did not stop Cody’s parents; instead they took the diagnosis of cerebral palsy as a challenge and started to expose Cody to all he could in an attempt to test the limitations that CP would cause. As a result, Cody learned to play sports, even if it meant more time dedicated to learning them. Cody also rode his bike and hiked. As he got older, he started to realize his love for cycling.

While Cody acknowledges that CP is a large part of who he is, he has been able to work with the many challenges it presents. With activities that are more technical, such as hand eye coordination, sports took extra time to learn and master. With cycling, Cody has to take extra time to work on imbalances that occur due to the CP on his left side. All these activities are more difficult for Cody than for other individuals, but they helped him develop a spirit of resilience that has only made him stronger and better prepared for the challenges that life brings. The resilience that Brian and Kelly instilled in Cody provided a base for becoming a para cycling Olympian.

You can catch Cody Jung wearing red, white, and blue on his bike in Tokyo for the individual time trial (Aug. 31) and the road race (Sept. 3). All games can be found on NBC.

The Significance of Staying in Place: Anjuli Paschall

An Inside Scoop From PLNU’s Medical COVID Task Force