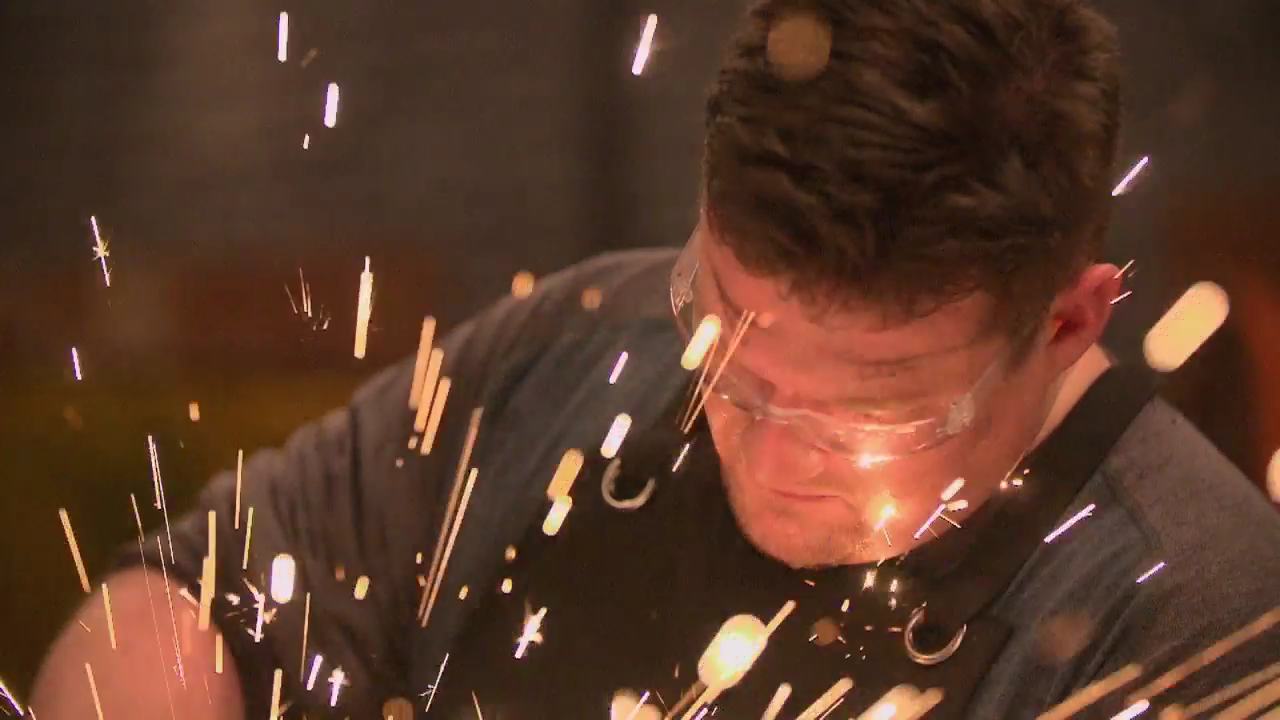 Long before PLNU alum Elijah Waddle (10) appeared as a contestant on the History Channel’s bladesmithing competition show Forged In Fire in early 2019, he asked a journeyman knife-maker near his Central California military base if he could learn a few things from him.

“[The journeyman] was like, ‘sure, just bring some propane when you come,’” Waddle said. “I did, and it ended up being a two-year apprenticeship learning how to make knives. It’s this whole art form. I love it because you’re taking a lump of metal, and you’re turning it into a work of functional art. [The journeyman] really drilled it into me that attention to detail is what separates a bladesmith from a knifemaker.”

Waddle now runs his own woodworking and knifemaking business called Waddle’s Workshop. He crafts and sells knives, pens, and flags. The pens are smoothly finished — some with glossy iridescent greens and blues, others with the swirls of wood and personalized carvings. The knives come in various shapes and sizes, and the slickly finished flags can be personalized as well.

Waddle said he’s had a love for woodworking since he was young. A high school friend of his had an interest in blacksmithing and a forge (a box hot enough to melt the metal) in his backyard, where Waddle spent much of his time making small metal pieces like hooks and hearts. He didn’t do much metalsmithing in college, and it wasn’t until he was living on a military base in Central California a few years later that he started watching the show Forged in Fire and decided he wanted to get back into the practice of metal-smithing.

Waddle says that, for him, woodworking and metal-smithing are a form of self-care and one of the reasons he started Waddle’s Workshop in the first place. Having also served in the U.S. Navy, and as someone who’s been trained as a suicide interventionist for fellow veterans, advocating for mental health is “powerful and close to my heart,” he said.

“Veteran suicide is a huge problem,” Waddle said. “I’ve lost shipmates to suicide. One of the things that was part of my training was that self-care is incredibly important. So I never lose sight of why I started Waddle’s Workshop, and that was for self-care.”

One of the things that was part of my training was that self-care is incredibly important. So I never lose sight of why I started Waddle’s Workshop, and that was for self-care.

The precision, attention, and presence required in knife-making and woodworking are mindful practices that contribute to his well-being, as is being able to offer his art to others.

“This brings joy to people’s lives. It’s an art form,” he said. “Some people paint, some people sculpt clay. I carve things out of wood and beat things out of metal. It’s a great stress-relief. I love [the pens] and they’re beautiful, but what’s better for me is the look on the customer’s face or the recipient’s face.”

The History Channel initially reached out to Waddle to be on the show due to his military experience, inviting him to be on an episode of Forged In Fire that was “Battle of the Branches.”

“[History Channel] did an interview [with me], and they were like, ‘look, if you can’t get away to do it for this episode, you need to come be on this show, whatever we gotta do.’ So my command approved me going, and I just had an absolute blast,’ Waddle said.

Waddle, who studied media communications while at PLNU, said being on TV brought up “a lot of nostalgia from college.”

“They keep you in a greenroom and don’t let you wander around. You’re sequestered in that room with the other smiths,” Waddle said. “It was a whirlwind, just a surreal experience.”

The episode aired in May 2019, “five or six months after it was filmed,” he said. “I couldn’t tell anybody that I was on the show. We did a little watch party at our nearby Buffalo Wild Wings because the manager was a blacksmith friend of mine. During the airing, my Facebook blew up with friend requests. Even now, years later, I can tell when they air the episode, because I’ll get hit on Facebook. I’ve gotten a lot of orders from that.”

Waddle said he plans to keep his small business a hobby for the next few years, since being a husband, father of three, and a full-time officer takes up most of his time. But the practice of his art, he said, is about caring for himself first and foremost.

“So often we get drowned with work and family and taking care of the house and everything else that we lose sight of taking care of ourselves and our own well-being,” he said. “That’s how I got into the wood and metal stuff, and I continue to keep in mind that that is my self-care.”