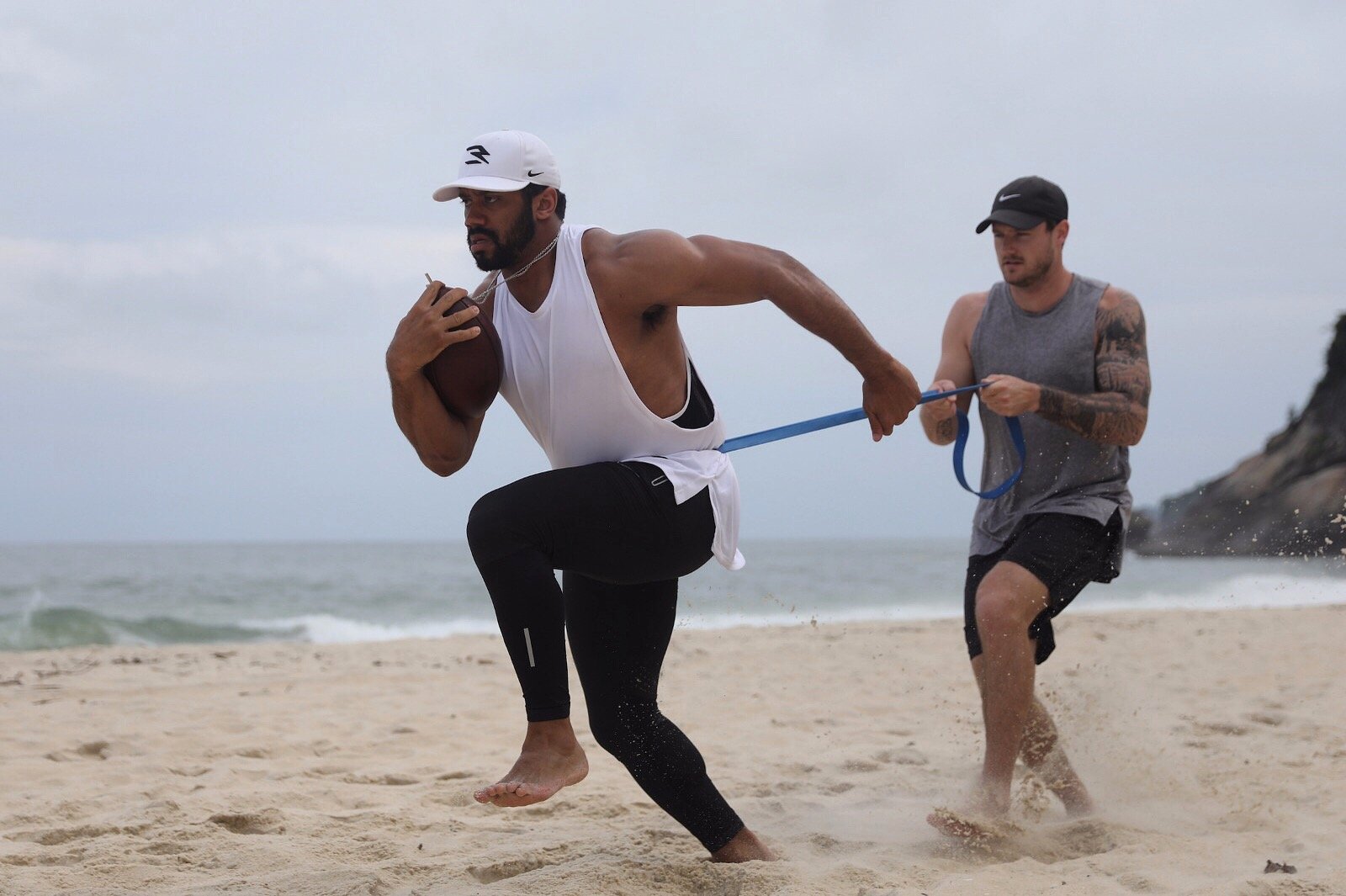 The day Seattle Seahawks quarterback Russell Wilson hired PLNU alumnus Decker Davis (14) as a personal trainer, the two didn’t spend the majority of the day in the weight room. After one session in a nearby hotel gym, they spent the rest of the day hanging out.

“It was the weirdest day of my life,” said Davis. “We jumped in his car, and we went to a hotel gym, and I took him through a workout, and he loved it. Then we went to his house, and I met the family. I met Ciara [R&B singer and Wilson’s wife], and we spent the whole day talking. He hired me that same day.”

A true San Diego native, Davis spent his whole life growing up in the tight-knit Point Loma community. After graduating from PLNU with a degree in kinesiology, Davis began working full time with personal trainer Ryan Flaherty, now the performance director at Nike. Davis and Flaherty stayed in touch, and one year after he left, Davis got a text that would eventually lead him to a state 1,200 miles away.

“I got a text from [Ryan] saying that he had Russell Wilson looking for a professional trainer and that he thought of me first,” said Davis. “Three months later, I got a text from Russell saying he wanted to meet.”

After spending the whole day with one of the nation’s top athletes, Davis found himself signing on as Wilson’s personal trainer and joining his West2East Empire team.

“The job is crazy,” explained Davis. “I don’t have a set schedule because it’s up to them and the season, and we travel a lot.”

Davis has visited Cannes, London, Brazil, and many other places around the world for work. Sometimes it’s for Russell’s training, and sometimes it’s to promote Ciara’s brand. But everywhere they travel, it’s Davis’ job to do research on the hotel gyms and equipment they’ll be able to access.

“I have to figure out in advance where we are going, what hotel we are staying at, what kind of equipment that hotel gym has, or if there are gyms in the area,” said Davis. “Then with that info, I can come up with the type of training or exercises we do. It’s been a fun challenge putting that together.”

But keeping the celebrity family physically fit is just one part of the equation for Davis. He sees it as more than a working, transactional relationship. Since his first training session with Wilson, he’s discovered commonalities with the professional football player that have only grown stronger as they continue to work and train together.

“We’re both Christian men and athletes, and we can joke with each other. I always try to beat him in everything, and he’s always competitive with me. Everywhere we go, it’s like that,” said Davis with a laugh.

Since his first training session with Wilson, he’s discovered commonalities with the professional football player that have only grown stronger as they continue to work and train together.

The strong personal and working relationship that Davis has cultivated is a result of the way he was brought up. He credits a good portion of his success to the faith-filled household he was raised in and the friends he made at PLNU. And like a true local, Davis takes every opportunity to return to the place that holds so many of those memories.

“Point Loma will always be home,” said Davis. “I had a cool college experience where I also got to see my family and friends, and I think that’s pretty special … You have those friends and that community for life.”

And while moving back to Point Loma won’t happen any time soon, Davis isn’t disappointed.

“From the beginning [Russell] told me that he wants to keep me as long as he can,” said Davis. “So I’m not necessarily worried about where I’ll be working. I’ve already established myself, and I’m taking it day by day. I know I’m still young.”

His current role as personal trainer under Wilson’s West2East Empire team has given him the experience and skills he needs to continue working with professional athletes. He’s even considered striking out on his own under a personal brand in the future, but for now he wants to continue his current adventure and let faith guide his steps.

“I’ve gotten a lot better at patience,” said Davis. “Trusting that Jesus is in control of every situation is the simplicity of it. With that faith and trust, worries and anxiety kind of disappear.”

Related Article: How Hope Leadership Academy is using sports and education to share a message of hope and God’s love to kids all across San Diego.