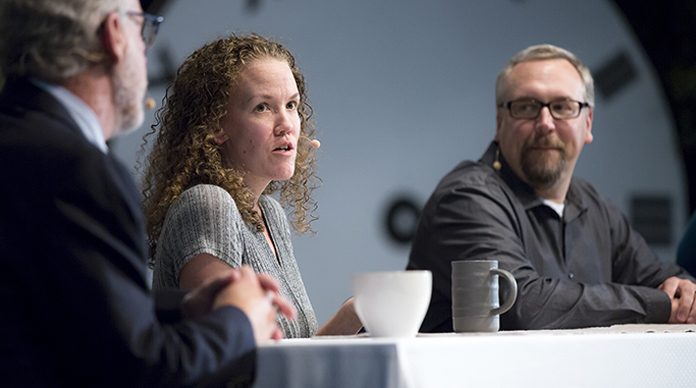 Ashby Rauch Kidd’s (03) vision has taken her halfway across the world. In 2003, she founded Visible Grace (VG), a nonprofit organization that aims to get children in Kenya off the streets and promote their overall well-being by building homes and providing education. Through VG, Kidd’s ultimate goal is to raise up Christians who love and serve God.

On a Tuesday morning in 2002, Kidd, who was studying abroad as a junior child development major, was riding the subway in Italy on her way to class. She noticed two young children walking up and down the aisles, begging people for money.

“I looked at them and thought, ‘These kids need an education, or they’re going to end up on the streets,’” said Kidd. “‘They’ll never break the cycle of poverty without education.’”

This moment proved to be deeply transformative: it was then that Kidd decided she wanted to start schools for underserved children.

A self-described dreamer and overachiever, Kidd envisioned providing education for children everywhere. She had already spent time with underserved communities as a student at PLNU through various outreach and homeless ministries. She would hand out coffee and donuts to people in Ocean Beach, and she also attended a church in a park, where several attendees were homeless.

“At some point, I had enough friends on the streets that I felt comfortable just going and spending time with them,” said Kidd.

As her vision became more specifically about helping orphans, she knew where she wanted to start. As a sophomore, she had spent a semester abroad in Kenya and had fallen in love with the country. Her original idea was to build a school in Kenya, as Kenyan public schools are grossly underfunded. A typical classroom has “100 kids, 10 desks, and one teacher,” she said.

But with her child development background, Kidd realized children won’t thrive in school if they don’t have good care: “They needed food, medicine, shelter, but also love and support and discipline.”

So she began working to create a home for orphans that would meet each child’s needs holistically.

She can now speak Swahili and continues to use her gift of cultivating relationships and bringing people together. When she began at 23 years old, she felt overwhelmed by her lofty vision. Kidd relied on her network of Kenyan friends, and a friend helped her register VG as a nonprofit to start raising support in Oregon.

“I didn’t know all the steps,” said Kidd. “I just did one thing, then the next.”

She has since sourced VG’s team, including a lawyer, an accountant, an architect, board members, staff, and volunteers.

Establishing the first VG home — there are currently two in Nairobi — was a slow and often frustrating process. From buying the first 10 acres of land to getting building permits and obtaining the government’s permission to take kids in, VG has faced many obstacles. But each obstacle ultimately revealed Kidd’s unfaltering determination to realize her vision.

After eight years of fundraising and working with the Kenyan government, VG finally broke ground in 2011.

“When I would get discouraged or overwhelmed, I would just think about the goal: helping these kids,” said Kidd. “And that always kept me going.”

The nonprofit runs on donations from supporters; it takes about $3,000 a month to run a home.

VG takes in children ages five and under who have lost both parents, finding them through community and government referrals.

“Our vision is to raise godly Kenyan leaders who will change Kenya for the better,” explained Kidd. “I hope that pouring into them means they’ll become pastors, teachers, politicians, mothers, and fathers who care for others and can help change the culture of Kenya.”

A home fits 10 kids, so it feels like a “big but manageable family,” said Kidd. Each home is run by a house father and mother, aided by house aunties.

“The parents actually have time to work with each child and teach them life skills that orphans often don’t learn,” explained Kidd, who mentioned how common it is for children to be treated as “less than” in Kenya. A typical day for a child at VG includes meals, school, games, chores, devotions, and bedtime. The kids attend a private school, which offers a better education than public.

Kidd aims for VG to continue building as many houses as possible. “The long-term goal is education and eradicating poverty and orphans and AIDS,” said Kidd. “The eternal goal is raising up Christians who love and serve God and will bring others to the kingdom.”

The past four years have brought many changes for Kidd. After she met her now-husband, Abram, in Kenya, they married and moved to a Tanzanian village they currently call home. Kidd has stepped down from running VG and now serves on the board. She primarily works remotely while consulting daily with VG’s managing director. Kidd takes multiple trips to Kenya throughout the year for VG meetings and home visits. She and her husband also serve as missionaries supported by Africa Inland Mission, while raising their three children. She hopes to start building a school soon, providing a few hundred students with quality education.

“The more time I spend here, the more I firmly believe that education is key to getting out of poverty,” said Kidd. “Maybe not always in the U.S. but definitely here.”

Kidd said being away from her family back home certainly hasn’t been easy. She relies on trips, video calls, and WhatsApp to stay connected.

“It doesn’t feel like it, but I know that this life is just a ‘minute’ and heaven is for eternity,” said Kidd. “We also have an incredible community here who act as uncles and aunties and grandparents for our kids and friends/parents for us.”

Kidd knows that her own sacrifices are in service to God’s Kingdom, and that is what keeps her going each day.

Ashby Rauch Kidd was one of five alumni awarded the 2017 Alumnus of Point Loma Award. The award is given to recognize significant and outstanding accomplishments in our alumni and the impact they’re having throughout the world.

Shannon is a writer, editor, and content creator. You can find more of her writing at shannonmarabarr.com.

Visit Visible Grace to learn more about the organization.

Related Article: APL awardees Ryan and Wendy Kessler open up their home to break bread with others and share God’s love.