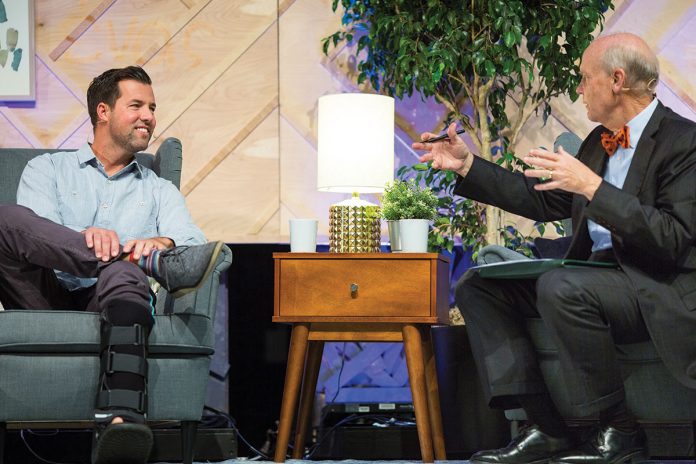 A decade or so ago, Dusty Davis (03) was at work when the song “American Dream” by Switchfoot came on the radio.

Although Davis and his wife, Nicole (Peviani) (03) Davis, were strong supporters of their church and went on mission trips, and although he was successful at work, Dusty felt unfulfilled at that moment. He felt the work he was doing wasn’t what God was ultimately calling him to do. Now, 10 or so years later, Davis sees how, all the while, God was giving him experience that could be used in work that makes his heart soar.

“A month ago, I heard the song again, and I felt overcome emotionally,” Davis said. “Because I know that God put the desire for full-time ministry in my heart, and then he gave it to me in his perfect time.”

Davis’s shift to a career in full-time ministry came after he had built a successful career in the financial and telecommunications industries. After a dozen or so years in those fields, Davis began sensing that God was calling him to something new. One of his best friends, Chris Marshall, vice president of global partnerships for the nonprofit Kids Around the World, connected Davis with Scott Kvandal of Su Refugio. Su Refugio is a Christian nonprofit organization working primarily in Paraguay, Peru, and Argentina to help widows and orphans. Davis spent a week in Paraguay with Su Refugio on a mission trip and immediately sensed that this was where God was calling him. While in Paraguay, Davis was introduced to a young woman who had been rescued by Su Refugio as a child. She was getting married and attending Bible college. It was a powerful picture of God’s redemptive plan being carried out by SRM.

“It was the joy of my life to be part of God’s work to widows and orphans,” he said.

As director of development, Davis spent most of his time with Su Refugio working within the U.S. to connect people to the ministry. He and Nicole also went on and led many mission trips. During their time with Su Refugio, the Davises saw moms equipped vocationally so that they could earn enough income to keep their children with them. They were involved with kids’ clubs that brought whole families to Christ and led food packing events that helped feed hungry children.

“Kids’ clubs and food packing lead to churches,” Davis explained. “In Argentina, we are watching the second phase of the school break ground.”

Happy and fulfilled, Davis envisioned staying with Su Refugio for the long run. His family attended The Shoreline Church in San Clemente, Calif., which partners with Su Refugio. His four children, Caden, 13, Gavin, 11, Maddie, 9, and Brooklyn, 5, all attend a Spanish-language immersion school. But, in 2018, once again, Davis sensed God calling him to something new.

Shoreline had been without an executive pastor and was in need of a director of operations. With his business background, Davis was a strong fit. Once the church approached him, Dusty and Nicole began to pray to seek God’s will.

“I felt God saying I didn’t call you to a specific ministry or to people,” Davis said. “I call you to myself. As your commanding officer, I retain the right to reassign you.”

“I felt God saying I didn’t call you to a specific ministry or to people, I call you to myself. As your commanding officer, I retain the right to reassign you.”

On July 1, 2018, Davis became the director of church operations for Shoreline. His role involves leading and shepherding the staff as well as making sure the church runs well operationally. His experience leading teams in business and his PLNU degree in psychology with a minor in business administration prepared him well. His partnership with Nicole has also been vital.

“She is as excited and willing to make the sacrifices as I am,” Dusty said. “It’s not just her supporting me. That’s made a difference because there are trials in life and extra trials in ministry. She is in full-time ministry, too.”

As Davis settles into his new role, he is grateful for the way God has led him and is always with him.