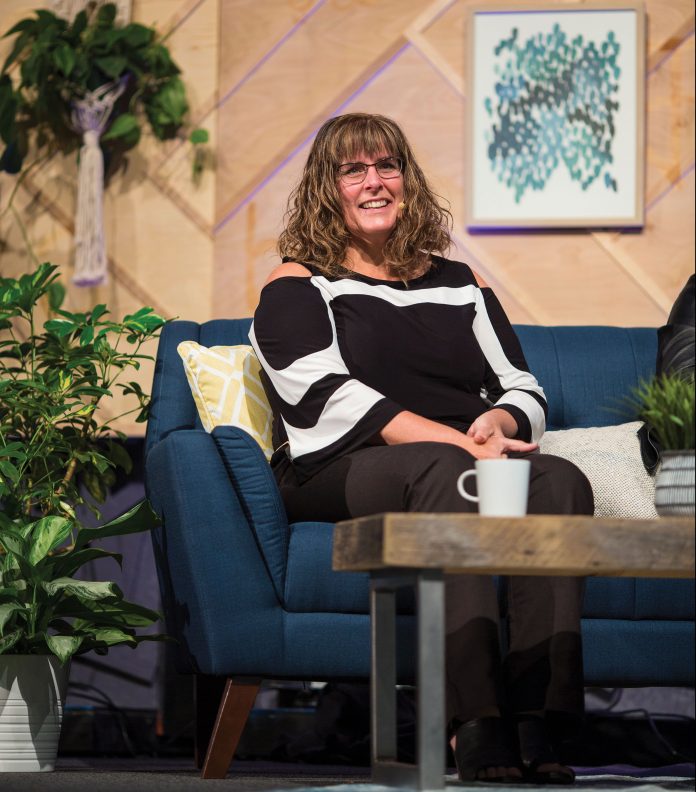 Jenny Harris (87) knows that by 2050, there will be an estimated 9 billion mouths to feed around the world. That’s why her work excites her.

As the owner and CEO of American Hydroponics, or AmHydro, she is part of an industry that helps feed people cleanly and efficiently. Hydroponics is a process of growing plants in water with added nutrients and minerals and without pesticides. It allows for significantly higher yields of crops like lettuce in a much shorter time than traditional farming. Hydroponics wasn’t an industry she had planned to enter, but it’s where God led her. Now, it’s where her passion lies.

At PLNU, Harris double majored in secondary education and business administration. She then worked in the finance industry where her experience ranged from working with a dot-com startup to serving as the accountant for the actuarial department of GE Financial. While she was working as a business consultant, the founder of American Hydroponics asked her to join the company as finance director. Despite being overqualified for the position, Harris accepted the work.

After she helped sell the retail store part of American Hydroponics, the founder asked Harris if she would be interested in buying the business along with a horticulture expert named Scott Kornberg. Since Kornberg knew the horticulture side, and Harris could run the financial side, the pair agreed. However, not long after, in February 2015, Kornberg died of a heart attack. Suddenly, Harris was faced with providing for 14 employees and running the entirety of the business on her own. Thankfully, she knew she wasn’t really in it alone.

“I was 150 percent dependent upon God,” she said. “I prayed, ‘God, give me wisdom to do what you want me to do.’ And it was in that dark year that I began to catch the vision of what we could be as a company.”

“I was 150 percent dependent upon God. I prayed, ‘God, give me to do what you want me to do.’ And it was in that dark year that I began to catch the vision of what we could be as a company.”

Today, American Hydroponics is thriving. Its systems are being used in 66 countries and on every continent except Antarctica. Harris is invited to speak about her business and its possibilities around the world.

“Our objective is to bring food to a community wherever it is and to help it be self-sustaining,” she explained. “We work in many island nations, desert areas, and places where there is food or water scarcity. It’s not just a business, but a way to truly alter the lives of people around the world.”

Helping others is something that has always been very important to Harris. Before her business responsibilities required her to cut back, Harris helped lead the youth group at Eureka Church of the Nazarene for 10 years. She involved the junior and senior high school students in ministry to the community, such as caring for the homeless and preparing meals for seniors. She also helped raise $50,000 to take 23 youth and leaders to Ghana for a life-changing mission trip.

“It helps kids learn how to give and that being involved in community is a lot more fun than being alone,” she said.

She also helped the students see the possibility of Christian higher education in their futures by bringing many of them to visit PLNU on junior and senior days — at least 20 young people have come to PLNU due to her influence. Also, for the past two years, she has added sitting on the board of Humboldt State University to her resume.

Harris has been very involved in work serving the homeless through the Betty Kwan Chinn organization; has been a respite foster care provider; and has shared her home with missionaries, foreign exchange students, and youth in need of a place to stay. As work has stabilized, she’s also begun volunteering with the youth at her new Nazarene church in Arcata.

“I feel certain God has placed me in the right spot all the way,” she said.