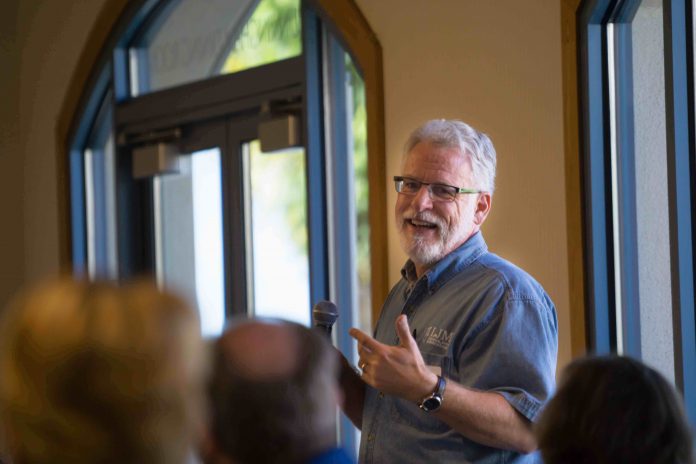 It was the “biggest Glorious Fourth in 100 years,” wrote the New York Times. On the weekend of July 4, 1976, Americans bellowed patriotic songs and celebrated across the nation with parades, music, and readings of the Declaration of Independence, all in tribute to the country’s bicentennial.

Karl Martin, Ph.D. (81), now professor of American literature at PLNU, was a high school student in his hometown of San Jose at the time. But while many across the country lost themselves in the festivities, he quietly began to question what it meant to be an American.

The bicentennial celebration came on the heels of Watergate, a scandal that threw the government into a crisis over the Constitution. The U.S. had been in the Vietnam War, a point of controversy for many Americans. Even the institution of marriage proved fallible, as the divorce rate began to rise.

“There were a lot of these things that really challenged what it meant to be an American,” he said. “And then there were some political leaders whose answer to that question was different from what I sensed myself. I saw this as not an easy question to answer.”

By the time he enrolled at PLNU, he had begun to see faults in the country’s valued cultural institutions, including the church, which wasn’t always discussing serious problems. Looking back, he saw himself as somewhat cynical.

“I thought, ‘Can people actually be Christian in a meaningful way? Can Christian community actually work?’ I think I came here kind of like, prove it. I want to believe, but you’re going to have to prove that thinking people can also be loving people.”

From the first day he set foot on campus, though it wasn’t perfect, the PLNU community proved to be what he was looking for, and much more.

In his first literature class, Noel Fitch, former professor of literature, put authors like Hemingway, Fitzgerald, and Faulkner into Martin’s hands. There, he found his deep love for literature.

“I don’t know who I would be without this place,” he said.

Martin had many encounters at PLNU that helped him understand the perspectives and experiences of others, and these encounters exemplified the love of Christ to him.

“That’s what was modeled for me by this community that refused to make a distinction between what I was learning and my service to other people in Christ,” he said. “That was something I so needed when I was an 18-year-old.”

After leaving PLNU, Martin went on to study American Studies at San Diego State University. There, he found he could study American literature alongside other culturally significant works.

“I realized I could study popular culture because it’s part of a cultural conversation,” he said. “American Studies breaks down the lines between genres of cultural expression. I can put a movie next to a ball game next to a novel, and they have something to say to one another. And, it’s so fun!”

Martin ultimately transferred to the University of Minnesota, where he earned both his masters’ and Ph.D. in American Studies. Above all, he was most interested in finding ways Christianity and American literature intersect. It was then that a friend suggested he read the works of fiction writer Flannery O’Connor.

O’Connor wrote from an Orthodox Christian perspective about outcasts and criminals in the post-WWII American South. Martin was intrigued — especially when he came across one of her essays where she wrote a writer’s vision must be a “prophetic vision.”

He wondered if what O’Connor was talking about had anything to do with The Prophetic Imagination by theologian Walter Brueggemann. When he read the two alongside each other, Martin was able to read O’Connor in a way he had not previously considered: as a prophet, in Brueggemann’s sense of the word.

“Not as someone who tells the future, but as someone who looks at her society and sees places where there is deafness and numbness, where people aren’t admitting the way the world really is, and points to those places to say, ‘This isn’t working or right, we have numbed ourselves to other people and their experiences,’” he explained. “The prophet’s second job is to energize people by saying God is capable of doing a new thing. Our pain and our suffering are not the end of the story.”

Martin saw that not one of O’Connor’s characters was outside the reach of God, including a mass murderer, a self-righteous church woman, and a one-armed handyman who marries a mentally challenged girl to steal a car.

“That was incredible for me,” Martin said. “That gave me another way of exploring American culture, to ask where our prophetic voices are that would say, ‘There are people hurting, and we can’t ignore or deny their voices. We have to listen.’ And would also say, ‘God can do anything.’”

Martin looks for prophetic voices in American literature, music, politics, and pop culture. Some of his recent scholarship has focused on Marvel’s Watchmen, and he is currently writing about O’Connor’s impact on the later songwriting of Bruce Springsteen.

But his favorite part of his job is getting to put works of literature in the hands of students. From students who share their individual experiences with works of literature; to members of his church, First Church of the Nazarene; to fellow faculty members; to his wife, Brenda, who, on one of their early dates, asked if they could give a meal to a homeless man — Martin feels grateful for the many examples he’s had and the people who have formed his understanding of God’s love.

When he first came to PLNU, Martin looked to leaders on campus to show him there could be people who were both thinking and loving. Now, having taught here for 19 years, he has blessed countless students, faculty, and staff with his leadership, teaching, and friendship.

“Part of the legacy of professors at PLNU is that people say, ‘You have to take at least one course from …’ and the list has included people like Reuben Welch and Mike McKinney,” shared Dean Nelson, Ph.D., professor of journalism. “That list now includes Karl Martin.”

“He has been a wonderful example to me regarding how Christian faith can serve as a foundation for intellectual pursuits and a life of righteousness,” shared Mark Mann, Ph.D., director of the Honors Scholars Program. “Karl represents the very best of his [Nazarene] heritage, and the core values of the university that both nurtured him and now are nurtured by him.”

As a keeper and teller of stories, Martin works diligently and passionately to point all of us to voices that need to be heard. At a time when our culture and nation need to hear the voices of the marginalized, more than ever, Martin’s perspective is not only helpful — it’s prophetic.

“If I cannot listen to my neighbor’s story, if I cannot know them at least partially through their stories, how can I love them? How can I make sure I’m responding to what they need?” he asked. “I think [literature] gives us a chance to better enact the call of God, to love our neighbor, to welcome the stranger … If I can listen to them, I may be able to better love them like Christ.”

Karl Martin was one of five alumni awarded the 2017 Alumnus of Point Loma Award. The award is given to recognize significant and outstanding accomplishments in our alumni and the impact they’re having throughout the world.

Related Article: APL awardees Ryan and Wendy Kessler open up their home to break bread with others and share God’s love.