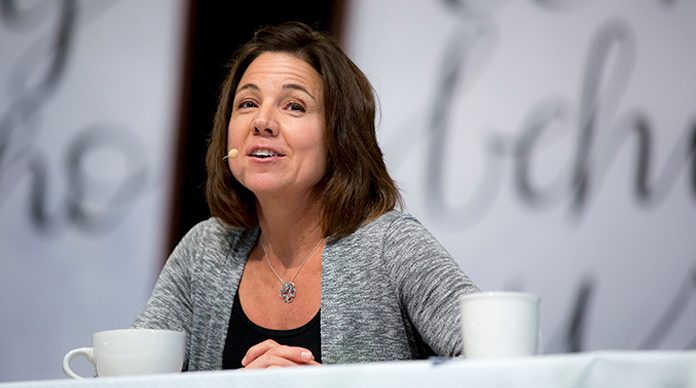 Michelle Shoemaker (88) sat, deeply disturbed, as she listened to a local sheriff speak about the atrocities faced by the victims of human trafficking — some girls as young as 12 — just three miles from her home, in San Diego’s aptly named Hotel Circle. It was 2012, and Shoemaker was attending PLNU’s social speaker series, Brewed Awakening, where she was indeed awakened by what she heard. She thought about her own daughter, age 11, and about all the young women who were friends with her teenage sons. After a few sleepless nights, Shoemaker called Jamie Gates, Ph.D., director of PLNU’s Center for Justice and Reconciliation, asking, “How can I help?”

Shoemaker had always longed to help others. Even before her days as a graphic design major at PLNU, Shoemaker felt a calling to become a missionary. Although those doors did not open for her, Shoemaker used her vocation to serve others, doing graphic design work for an ad agency that represented multiple large nonprofits around the world.

She explained, “I’ve designed countless marketing pieces that have helped to raise hundreds of thousands of dollars. But in the depths of my soul, there has always been this lingering hunger to be on the other side of the computer screen — to be the missionary in the picture.”

Just a couple of months before, Shoemaker had been going through a dry and empty season in her life, when a former classmate, Robin Verner (88), invited her to an event at Bethel Church in Redding, Calif. Feeling a little skeptical, Shoemaker wandered into a crowded, pre-service prayer room, sat down in the back, closed her eyes, and silently prayed.

“God, I’m not sure why I’m here, but I just need to know that you see me and that you love me,” she prayed.

Within seconds, she felt someone take a hold of her hands. She opened her eyes to see an older woman smiling at her.

“Young lady,” she said, “God told me to come over here and tell you how much he loves you and how proud he is of you.”

“It was as if, in that moment, this truth that I’d been taught all my life traveled from my head to my heart,” Shoemaker recalled. “Then she said, ‘Now, go and find your “secret place” every day, and you won’t recognize who you used to be.’ From that transformative moment, I knew I did not have to ‘do’ another thing to ‘get’ God’s love. He loves us. My perpetual guilt of not doing ‘enough’ stopped. By finding my secret place with God each day, I’ve learned that we don’t have to work for His love; we have it. And when we start from this abundant place of love, filled up and overflowing with it, then we are compelled to spill it all over the world around us.”

The revelation of love Shoemaker discovered that day emanates from her, even as she speaks of the harsh realities of the anti-trafficking work she has been doing in the five years since that phone call to Gates. Shoemaker began mentoring victims and taking on more responsibility at the Center for Justice and Reconciliation (CJR), eventually being named anti-trafficking liaison. During that time, PLNU partnered with the University of San Diego on a three-year, Department of Justice research grant. The study was entitled “The Correlation Between Sex Trafficking and Gangs in San Diego.” The results provided some of the first hard data on the subject in the U.S. and became pivotal in forming policy around human trafficking in San Diego County and across the country. Those same results shook Shoemaker.

Related Article: Exposing and getting rid of the dark underbelly of human trafficking in San Diego.

“Out of the 25 local high schools in the study, every single one of them reported human trafficking recruitment tactics on their campuses,” she said. That included the high school her own children attended.

The study also showed that 87 percent of victims are American citizens, not immigrants or refugees. Victims were found to be equally distributed across all racial and socioeconomic demographics and neighborhoods. Essentially, it showed that human trafficking is happening everywhere, even in areas we may think of as safe or privileged. Even in Point Loma.

The study’s results were eye opening to law enforcement, and they were especially eye opening to Shoemaker. She recounts a day when she was out with her mentee from Generate Hope, a local shelter for victims of sex trafficking. They were driving down Rosecrans in Point Loma, a route that Shoemaker takes several times a day, when the young woman pointed out the window.

“She went, ‘Pimp, pimp, prostitute, pimp,’” recalled Shoemaker. “I’m like, ‘What are you talking about!?’ She goes, ‘Miss Michelle, this is a whole culture of people that are right below the surface of your nose that you don’t see because you don’t look at them. We’re just trying to put food on the table, a roof over our heads, and live like the rest of y’all.’”

Shoemaker recalls wondering how to address a culture that runs so deep, a culture that affects poor and affluent, churched and unchurched alike, and that is being spurred on by pornography and sexual abuse. Through the grant, researchers from PLNU and USD interviewed more than 150 imprisoned gang members, discovering that almost every one of them had suffered some sort of extreme physical or verbal abuse as children, leading to a perpetual cycle of victims becoming perpetrators. Furthermore, nearly every prostitute or victim had also been sexually abused, most often before the age of 10, telling a story of broken people begetting broken people.

But despite the many challenges, Shoemaker and the CJR have seen amazing strides in uniting San Diego against human trafficking. Law enforcement, the District Attorney’s office, Victims Services, Child Welfare, university researchers, churches, and community groups are all working together in a collaborative task force, a feat unheard of in years past. And in 2014, PLNU launched its Beauty for Ashes scholarship, which now supports five former victims of human trafficking who are earning their degrees at PLNU.

One of the most exciting initiatives for Shoemaker has been a new human trafficking curriculum called “kNOw More.” Shoemaker was able to help strategize on the project, which is now being taught in San Diego County high schools and junior highs and may soon be launching nationally.

Shoemaker explained, “We’ve been dreaming about this curriculum for many years. If we can train the 13-year-olds, then when they are 18, maybe the boys won’t buy … and the girls won’t sell. And they will know the red flags of manipulation before they get taken advantage of.”

Looking to the future, Shoemaker hopes to see PLNU’s scholarship grow with more survivors on campus and more students and alumni involved in the CJR’s growing initiatives. Shoemaker is hopeful for the future. “The Holy Spirit is mightily at work across our globe, igniting and empowering his people to bring light to the dark atrocities of human trafficking, and I have great faith that the horrific numbers of enslaved men, women, and children are going to be significantly reduced in the future, as we, His people, are obedient to the foundational call of our Savior to take care of the ‘least of these.’”

Training up the next generation, loving those overlooked by society, and working to see captives set free — although Michelle Shoemaker is not working overseas, there are plenty of people who would say she’s become a missionary in her own backyard.

Michelle Shoemaker was one of five alumni awarded the 2017 Alumnus of Point Loma Award. The award is given to recognize significant and outstanding accomplishments in our alumni and the impact they’re having throughout the world.