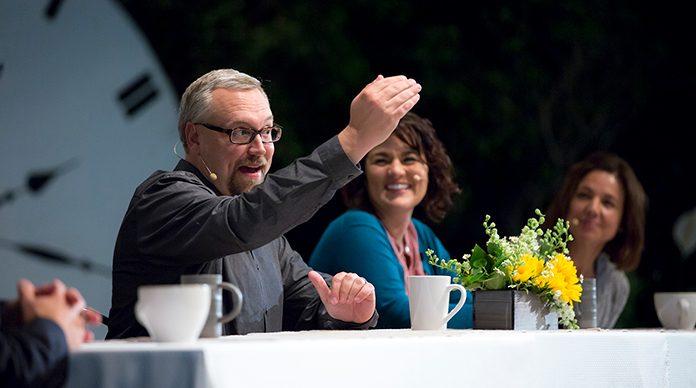 The hospitality woven into the identity of the Kessler family is something that “evolved very organically,” they say. In 2010, Ryan (94) and Wendy (94) co-led a 50-person intergenerational mission trip to Belize through San Diego First Church of the Nazarene. Once everyone returned home, some of the young women who had been part of the group asked Wendy if she would lead a Bible study for them. She accepted, and she and Ryan decided to invite some of the young men over weekly as well.

“I felt a clear call from God to step out and do more,” Wendy said. “I was in my late 30s, and I felt way too young to be a mother figure and mentor to college students. I didn’t want to feel old, but I would have missed out on so much if I hadn’t followed God’s leading.”

At first, the young people coming to the Kesslers’ home regularly were mostly PLNU students, and what they were doing resembled discipleship ministry. But over time, the group has become mainly post-graduates — many, but not all, from PLNU. And what they share is less specifically discipleship.

“I would say more than ministry, it’s church,” explained Wendy. “It’s an extension of church… Our home really has become a place for post-grads to find family and community and to be fed and nourished. It is a place to belong and to be in transition. The connections formed just from sharing a meal have been so powerful in transforming lives.”

“Ministry sounds more like one direction,” said Ryan. “But our whole family gets as much out of having the guys and girls over as they do. We feel more youthful by being part of a younger group. They often speak into the lives of our sons, hang out with them, and invest back in them.”

Related Article: Literature and teaching have both shaped and enriched the life of APL award winner Karl Martin.

“Intergenerational connections are so important,” Wendy added. “I need both older and younger people speaking into my life. As we age, we all have to fight cynicism. Having younger people in our home and lives keeps me connected to the part of my life that has idealism and passion and optimism.”

Wendy also emphasized that what they do is “hospitality not entertaining.” While the idea of entertaining often conjures up feelings of stress and images of an immaculate home, magazine-worthy decor, and impressive cuisine, hospitality is different.

“There is so much pressure now that we shouldn’t have people over unless everything is perfect,” Wendy said. “We have made hosting people so complicated. It really doesn’t need to be at all. Open your front door even if your house is a mess. Just talk and share life. Really amazing things happen when we do that consistently.”

For the Kesslers, opening their home twice a week for all these years hasn’t been a sacrifice. The effort it entails is offset by their passion for what they do.

“For us, the sacrifice comes at the end when we have to say goodbye,” Wendy said. “The faces around the table change every couple of years. If we have a ministry, we have a sending ministry. ”

One of the traditions the Kesslers have established is giving a set of their own silverware to anyone who is moving on or away. Attached is a note that says, “Because you will always have a place at our table.” Even as their guests move on, the Kesslers want to offer a sense of home and rootedness for their friends.

“Our table is meant to be a place where people can be their true self and not their best self,” she said. “I think that’s especially important for young people at a time of life with a lot of uncertainty.”

To this end, the Kesslers are open with their guests when they go through hard times. They welcome the prayers and support of the young people around their table. Allowing young people to see them for who they are and to understand that neither life nor home will be or need be perfect is highly impactful, especially for those just starting out in adult life.

The gifts the Kesslers give through their intentional fostering of community inspired some of the young men who attend their family dinners to make the logistics a bit easier with a gift of their own.

“My table is my most treasured possession,” Wendy said.

The table of which she speaks is a 14 x 6 foot farmhouse dining table that the Thursday night men built for her. Wendy had shared with them how inspired she had been after hearing Sarah Harmeyer of Neighbor’s Table speak at Donald Miller’s Storyline event. Harmeyer had collected signatures on her table that could seat 20 as her neighborhood grew closer by sharing meals around her table. Since the Kesslers were offering the young people coming to their homes the same opportunity, they offered back a 20-person, custom-built table along with a thank you card — not just for the meals and fellowship but for letting them do laundry at the house, for attending their bands’ concerts, for inviting them to the Kessler kids’ Little League games.

Now, the Kessler tradition is that everyone who comes and eats at their table signs its top with a Sharpie marker.

“The tabletop is just covered with signatures of people who have shared meals around our table,” said Wendy.

When they aren’t around their table, Ryan, who was a management information systems major at PLNU, is a senior IT manager for Qualcomm. He also works closely with PLNU’s Maria Zack, Ph.D., to place PLNU interns at Qualcomm. In his spare time, Ryan coaches Little League and serves on the board for First Church.

Wendy, who majored in sociology with an emphasis in social work, recently began a new position as a bereavement coordinator at Sonata Hospice after spending the majority of the years since she completed her master’s degree caring for her family at home. Even though this is Wendy’s first full-time position in her field, she knows she has been using her training and abilities for much longer.

“When I was a college student, I had so many dreams of opening a group home or working overseas. One day, I had a profound moment. I was cleaning up after one of our dinners, and I looked around. One guy was folding laundry. One was on his laptop. A few were playing a game. Others were talking and laughing. And I realized God had fulfilled all of my desires … I am running a group home here in Point Loma. I almost missed that this is my life work and what God had been preparing me for all those years of school and through my own mentors.”

Ryan and Wendy Kessler were two of five alumni awarded the 2017 Alumnus of Point Loma Award. The award is given to recognize significant and outstanding accomplishments in our alumni and the impact they’re having throughout the world.