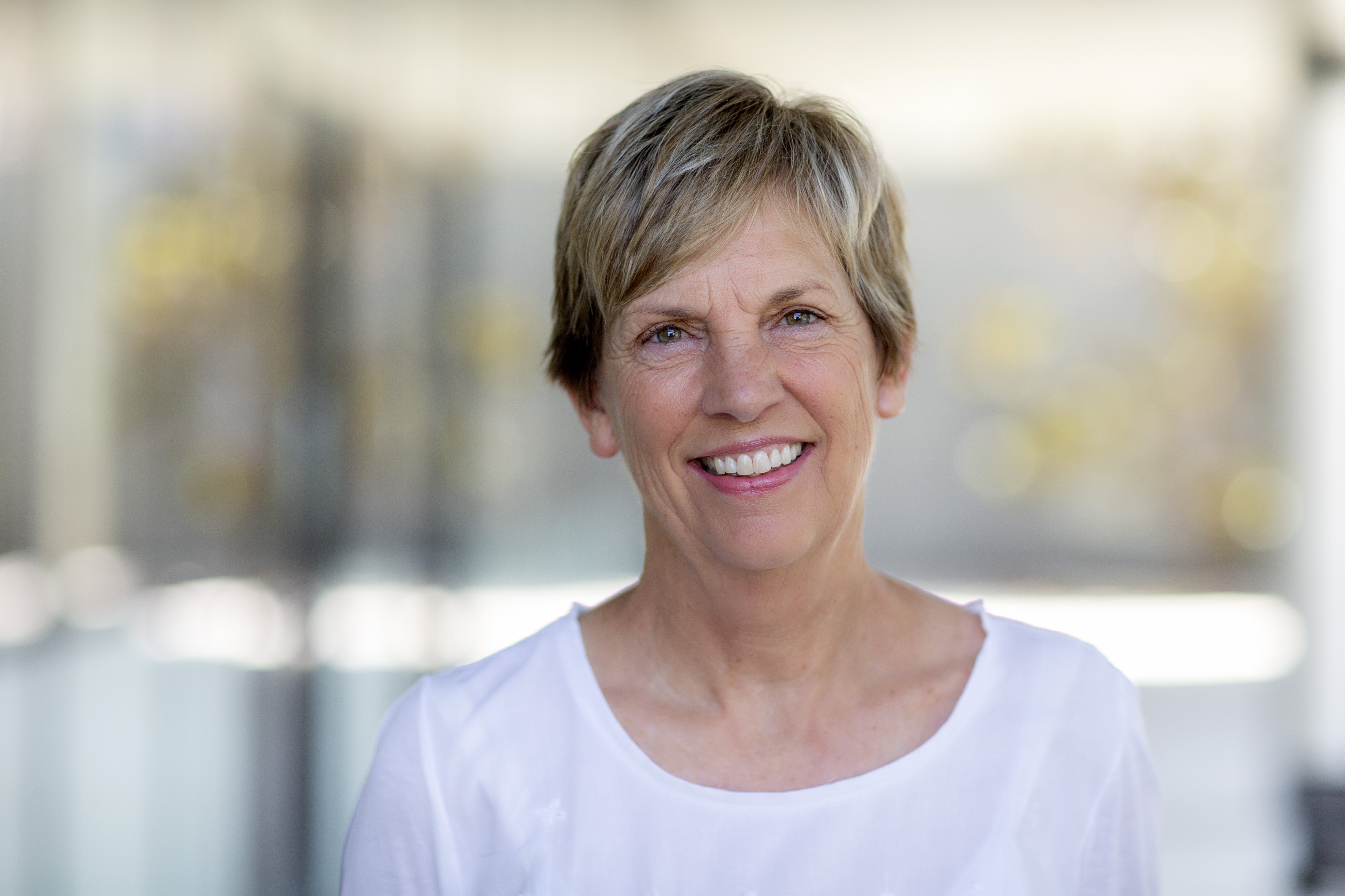 Being a mountain climber and long-distance hiker, Cindy Outlaw (pref. 79) knows a lot about perseverance. She also knows the value of many small steps in the right direction. Outlaw has climbed six of the seven summits — the tallest mountains on each continent. She has impacted thousands of lives in Tanzania and around the world through her work with Plant With Purpose.

She considers her greatest accomplishments to be her 31 years of marriage to her husband, Ed, and raising two now-adult children, Molly (16) and Ryan. Still ahead, Outlaw plans to finish a second master’s degree in marriage and family therapy (she already has an MBA). With her MFT, she aims to launch a new career in her 60s, helping others navigate marriage and family life. She also still hopes to conquer the last peak on her list: Everest, possibly in 2021.

Outlaw’s many accomplishments have required persistence and hard work. Happily, Outlaw enjoys both of those things. During her time as a PLNU student, Outlaw learned to love physical challenges when she took “Optimal Health” with Jim Crakes, Ph.D. Before the class, Outlaw hadn’t been involved with athletics, but when she saw how much she improved, she was inspired. The university was starting a women’s cross country team the following year, and Outlaw opted to stay in school an extra year in order to join. Unfortunately, she suffered an injury, but the time off is what led her to discover her passion for hiking. Ultimately, she continued both running and hiking for the next 40 years. In 2014, she organized a reunion of former athletes to visit and thank Crakes for his impact on their lives.

After Outlaw graduated from PLNU, she put her business degree to work. She spent 13 years at SAIC, which is where she met her husband. She earned her MBA from SDSU during that time. When her daughter was born, Outlaw opted to stay home. Four years later, her son was born, and her volunteer career began.

Outlaw has volunteered in many roles at church and in her children’s schools as well as with Girl Scouts, Summit Adventure (a Christian outdoor company that specializes in experiential education), and Plant With Purpose (a Christian nonprofit committed to reversing deforestation and alleviating poverty). She has served on the board of Plant With Purpose since 2003, including as board chair for the past three years. She also leads hiking groups and trips.

Outlaw’s hiking experiences have been intertwined with her family life, her friendships, and her volunteer work and ministry. A few years ago, Outlaw hiked the 200-mile John Muir Trail with her sister, daughter, and niece (who all happen to be PLNU alumni).

“Long-distance hiking gives you time with people that you never get to experience when you are at home,” she said.

Her daughter, Molly, said, “Who would I be if it weren’t for her? She instilled in me her love of adventure, with the reminder that it is always made so much sweeter by the people you are journeying with and the stories you get to share. She showed me what it is to have determination and tenacity to push through the most difficult of times and to take on new challenges. To keep running even when you’re being rained on. She has blazed her own trail and then invited countless numbers of people to come with her. She is a loyal friend and I am better because of her!”

Her friend Sue Gilroy agrees that the time she has spent with Outlaw hiking over the years has been significant in more ways than one. Gilroy describes Outlaw this way:

“Cindy is one of the most honorable, humble and thoroughly likable people I have ever had the pleasure to know. When hiking, she always checks on each hiker, engaging them and asking for updates on their lives. She is without judgment, without guile, and has a natural curiosity about people that makes them open up readily. There is diplomacy in every interaction; she can confront a situation with strength but deliver her message tactfully. Her easy laugh and relaxed nature belie her keen intelligence and worldliness. She sets her bar to a high level of personal achievement, and she has attained goals I can only aspire to. A true role model.”

As for climbing the summits, scaling all seven was a goal Outlaw set in her 20s. And it has been one that has required patience, determination, and good humor.

For example, making it to the top of Denali in Alaska took five attempts over 20 years. The first time, she found out she was expecting her daughter and so delayed the trip. The second time she had the climb planned, she flew all the way to Alaska before she realized she wasn’t ready to be apart from her daughter, who was one at the time, for three weeks. The third time, weather interfered. The fourth attempt stalled when she hurt her back in the airport on the way to the mountain. Finally, the fifth attempt was successful.

Another adventure ensued after Outlaw and her group climbed Mt. Vinson, the highpoint of Antarctica.

“Our team got stuck in Antarctica for 10 days because the plane could not pick us up,” she recalled. “Each day, more and more teams came into the base camp since we all were waiting for the flight back to Chile. Eventually, there were 250 people in camp, and the camp staff was thinking about ways to keep everyone entertained. We had a ping-pong tournament with 35 countries represented. The ‘Antarctica Olympics’ were organized, and everyone who wanted to participate got into teams of 12. There were 4 teams tied for first, including mine, with one event to go, which was the sled-pull. Every team member but one had to get on a sled and be pulled by the remaining member. We were fortunate enough to have a guy from Norway who had just pulled his sled across the continent on our team. He pulled us to victory! We got chocolate medals wrapped in gold foil as an award. Chocolate was getting scarce in camp since supplies were running low.”

Although each mountain has helped shape Outlaw, none has had a greater influence on her life than Mt. Kilimanjaro in Tanzania, which she has climbed 13 times so far. Her return trips have been inspired by her first time hiking Africa’s tallest peak in 2000.

“As we were there, we were seeing the life people live on Mt Kilimanjaro,” she said. “We saw malnutrition in the children and the deforestation there, and it broke my heart. I also found out about the need to build a school.”

Having recently supported a PLNU student who lived in her neighborhood and was going on a LoveWorks short-term mission trip, Outlaw thought of her alma mater when she wanted to help. As a result, Outlaw led two groups of PLNU students on LoveWorks trips to Tanzania in 2001 and 2004.

Although each mountain has helped shape Outlaw, none has had a greater influence on her life than Mt. Kilimanjaro in Tanzania, which she has climbed 13 times so far.

“Jeff Bolster led LoveWorks at the time,” she said. “He made my idea happen. I said, ‘Jeff, I ran into a school that needs to be built, and I would like to take students to help on the project.’ Jeff gave his approval and now a primary school is standing in the village of Masia Mamba on the southern slopes of Kilimanjaro.”

Wanting to do more to help the children, Outlaw then reached out to the Scott Sabin, director of Plant With Purpose, called Floresta at the time. Sabin and Outlaw went to church together, and she hoped he might share her vision of making a difference in Tanzania.

“When I called, he said he had been waiting for this call,” Outlaw said.

After an exploratory trip in 2003 during which they met with village leaders, Plant With Purpose launched its Tanzania program. Today, they work with half a million farmers and families in eight countries.

Plant With Purpose describes its impact this way on its website:

“We teach farmers to get three to four times as much from land,” Outlaw said. “We teach them how to form their own savings groups instead of living harvest season to harvest season. Having savings means they can pay for school, doctors, etc. It makes a huge change in their lives and gives people hope that their position is not hopeless. To know they will have food and can improve their houses and lives — it gives them hope.”

In addition to initiating the launch of the Tanzania program, Outlaw’s work with Plant With Purpose has included serving on the board of directors, including as chair, and co-chairing a $3.5 million campaign called Plant For Tomorrow. The campaign helped expand Plant With Purpose’s work into the Democratic Republic of the Congo and Ethiopia.

As Outlaw has brought people to see the work being done by Plant With Purpose in Tanzania and to climb Mt. Kilimanjaro, she has continued to have powerful experiences that shape her perspective. A man named Barry joined her on one hike and revealed that he was dying from cancer but still wanted to complete the journey. “I learned about living with joy,” she said. “Taking each day and opportunity and appreciating it.”

This lesson helped her with her own health struggle. About seven years ago, Outlaw lost vision in her left eye. Thinking of Barry helps her. “I’m thankful for my right eye every day,” she said.

In 2016, Plant With Purpose awarded Outlaw the Adrian Award for Exceptional Service.

“Although very humble and self-effacing, Cindy is one of the most dynamic people I have ever met,” Sabin said. “If it were not for Cindy and her initiative, Plant With Purpose would likely never have begun working in East Africa. I regularly hold Cindy up as the example of the ideal board member. We would not be the organization we are today without her leadership, initiative, compassion, faith, and faithfulness. Her involvement has improved every facet of our work.”

“We would not be the organization we are today without Cindy’s leadership, initiative, compassion, faith, and faithfulness. Her involvement has improved every facet of our work.”

PLNU is pleased to present Outlaw with the 2019 Alumnus of Point Loma Award. Join us November 22-23, 2019 at Homecoming to hear from Cindy Outlaw in person during Homecoming Chapel and at Loma Talks.