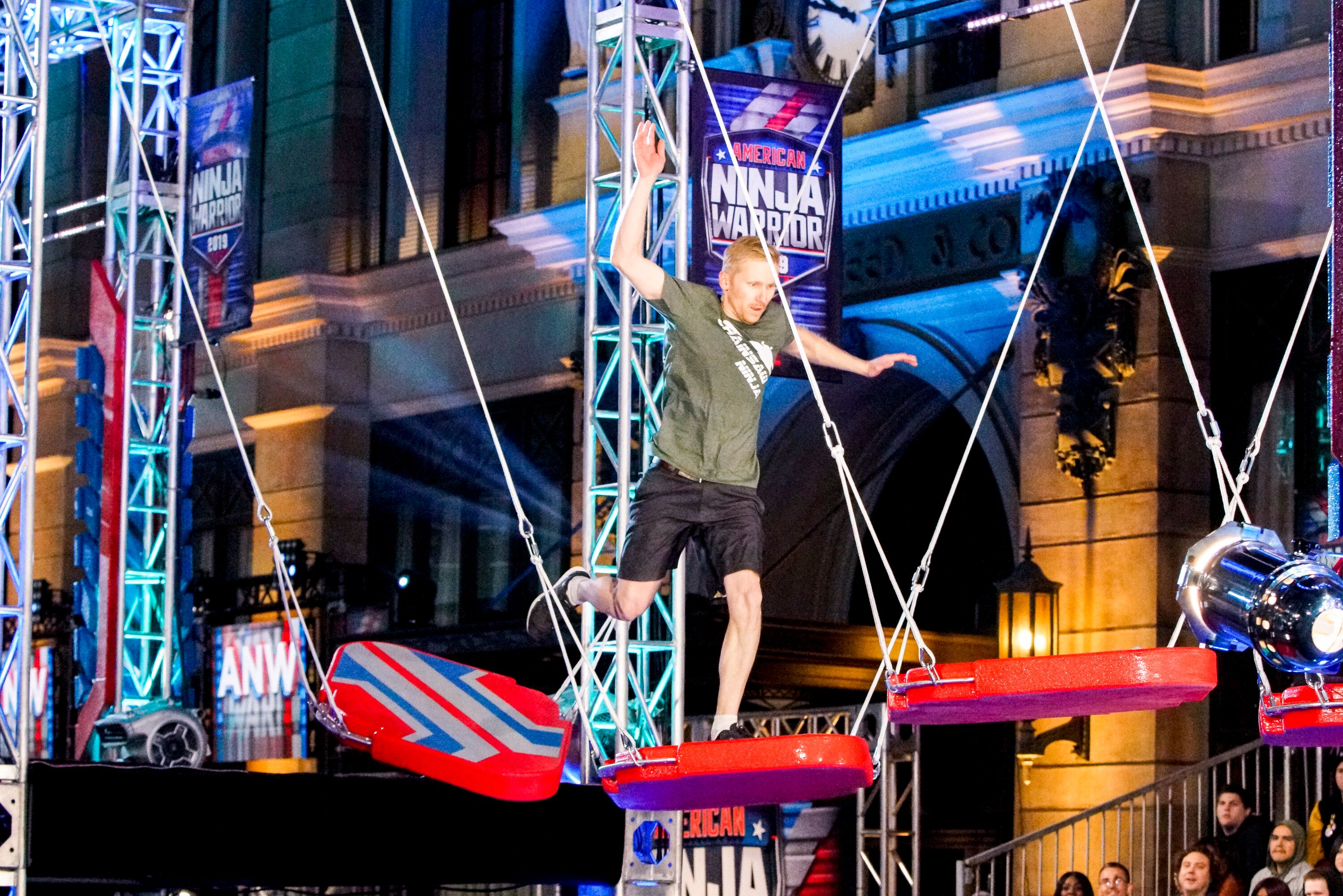 Corey McCoy (05) is a ninja warrior – at least after hours. A software programmer by day, McCoy made his debut appearance on the TV show American Ninja Warrior (ANW) last spring.

Known as “The Chainsaw Ninja,” McCoy attributes his extraordinary balance, upper body strength, and climbing ability to his early work experience as a tree trimmer. That type of athleticism is what’s required to successfully compete on ANW. The show pits contestants against an obstacle course filled with challenges that require the ability to climb, balance, swing, grab, hang, and make daring drops and leaps of faith. Parkour enthusiasts, CrossFit athletes, gymnasts, and military vets are regularly defeated by the obstacles. It’s a show about athletic prowess, risk, failure, and determination.

Since McCoy’s association with chainsaws has everything to do with trees, he was surprised by the other connotations people sometimes associated with his chosen moniker.

“Some people gave me a reaction like ‘chainsaw massacre?’ or some other morbid connection. I guess I’m on a mission to give chainsaws a better name,” he laughed.

But liberating chainsaws from their connection to violence is not McCoy’s only mission.

Known as “The Chainsaw Ninja,” McCoy attributes his extraordinary balance, upper body strength, and climbing ability to his early work experience as a tree trimmer.

“I felt like getting to be a part of the show was a gift from God,” he said, “and I prayed that it would be used for him whether it was victory or defeat, victory or humility.”

McCoy and his wife, Kristen (Radke) (08), have two young children, and he considers it a blessing to be able to be part of something that sets a good example for them. Not only does the show promote pursuing a healthy, active lifestyle, but the competitors typically treat each other with kindness and respect.

“I think it’s a very positive show,” McCoy said of ANW. “This show has awesome values, awesome people, and so many contestants are believers. ‘The Eye Ninja,’ Jon Bundy, is from my hometown, and he was literally on his way back from a mission trip to Cambodia when he got the call that he made the show. The awesome part is that although you are competing for a limited number of sports, it feels like you are against the course, not each other. I got tips from other ninjas, people who have been on the show before, Olympian Jonathan Horton – really solid people.”

As for McCoy, his path to be on ANW was facilitated by Kristen, who believed in his potential. The two of them saw ANW for the first time while staying in a hotel.

“He got so excited,” Kristen recalled. “I started looking up ninja gyms, but there weren’t any near us, so we started building things in our yard.”

Corey, Kristen, and their children, Kyla, 4, and Luke, 2, began training in their yard together. The kids loved it, and Corey found ninja warrior training a great physical outlet since he works at a desk most of the day. Kristen gave him the nudge to pursue the activity further.

“I signed him up for a ninja competition in February, and he did super well,” she said. “It was such a good community … I thought ‘Why not?’ and went through the process of submitting his application [to ANW].”

Kristen’s brother, Garrett Radke (06), made Corey’s audition video, and they received the news he was selected to compete just three weeks before filming began.

“It was a blessing straight from the Lord,” Corey said. “The credit is to God for an amazing opportunity.”

McCoy competed on two episodes, the Los Angeles qualifier and the L.A. finals, which were both held at Universal Studios. To add to the ambience of the show, the ninjas compete at night. Since training had been a family affair, the McCoys brought along their children and Corey’s parents, Harold (78) and Linda (Williams) (79) McCoy. The whole family ended up being shown on air during the qualifier, and it was an experience Corey will never forget.

“My first run was just incredible,” he recalled. “For us, because we were the very first ones filmed of the year, we had no idea what the first obstacle was going to be. It turned out to be brutally difficult, and several people had already gone down on it before it was my turn. The second obstacle was also tremendously difficult. When it came my turn to run, it was clear that it was a very hard course.”

McCoy approached the starting line, the lights all on him. The sky was dark, the air was cold, and it was raining.

“It was very, very nerve-wracking,” he said.

Despite the lights and the pressure, McCoy was able to succeed where others had fallen short. He had been practicing some skills that prepared him for the first obstacle called the “Shrinking Steps.” Then came the second test, a new obstacle called “Walk the Plank.”

Since the obstacle was new and McCoy couldn’t see past the end of the board, he had to sprint up it blind and jump as far as he could into space, hoping there would be something to grab onto once he was airborne.

“The second obstacle was a big plank, a board sticking up in the air at a 60-degree angle,” he said. “You have to climb a ladder to get to the base and then climb this board, staring into the black sky, a significant height above water.”

Since the obstacle was new and McCoy couldn’t see past the end of the board, he had to sprint up it blind and jump as far as he could into space, hoping there would be something to grab onto once he was airborne.

“I had trouble tracking in on what I was supposed to grab, but somehow I got just my fingertips on the bar,” he said. “The bar was on a track and started to move. It went black for me, but I somehow landed on the mat and had made it. “

After that, McCoy beat the next obstacle, “Spring Forward,” another new addition to the course. He made an impressive grab on a lache move (essentially swinging his body like a pendulum before throwing himself into the air and making a grab of a suspended bar). McCoy then overcame the “Diamond Dash” and “Spring Hopper” to make it all the way to the final obstacle, known as the Warped Wall. Though he didn’t make it to the top after his three tries, he did make it further than anyone had to that point in the competition.

“I was elated and got to go do some personal interviews,” he said.

McCoy’s run was enough to bring him back for the L.A. City Finals.

“I got a chance for redemption, and the second time, I was able to make it up the Warped Wall on the third try,” he said. “I was literally thanking God on top of that wall.”

Making it past the Warped Wall in the finals put McCoy into the back half of the course where competitors faced additional obstacles. He ended up making it one shy of what he would have needed to move on to the national finals.

“I got a chance for redemption, and the second time, I was able to make it up the Warped Wall on the third try.”

“My goal right now is to get on the show again, and then I would like to make it to the next level,” he said.

Though he has new goals, McCoy is also extremely grateful for the opportunity he has already had. Since not all competitors are shown on the televised episodes, McCoy feels honored to have had pieces of his runs shown on the broadcast version of both the qualifier and the finals. He’s also happy to have a positive, healthy activity to enjoy with his family no matter what comes next in terms of competition.

When McCoy isn’t training to be a ninja warrior in the backyard with his family or spending a date night with Kristen rock climbing, the Chainsaw Ninja works for an innovative company called Biosero, which provides automation software for medical research.

“Biosero is an amazing company,” McCoy said. “We work with all sorts of medical labs to try to find cures to some of the biggest and baddest diseases out there.”

The McCoys live in Prescott, Ariz., and attend Prescott First Church of the Nazarene.

Related Article: Alum creates art that you can run, slide, climb, and swing in!