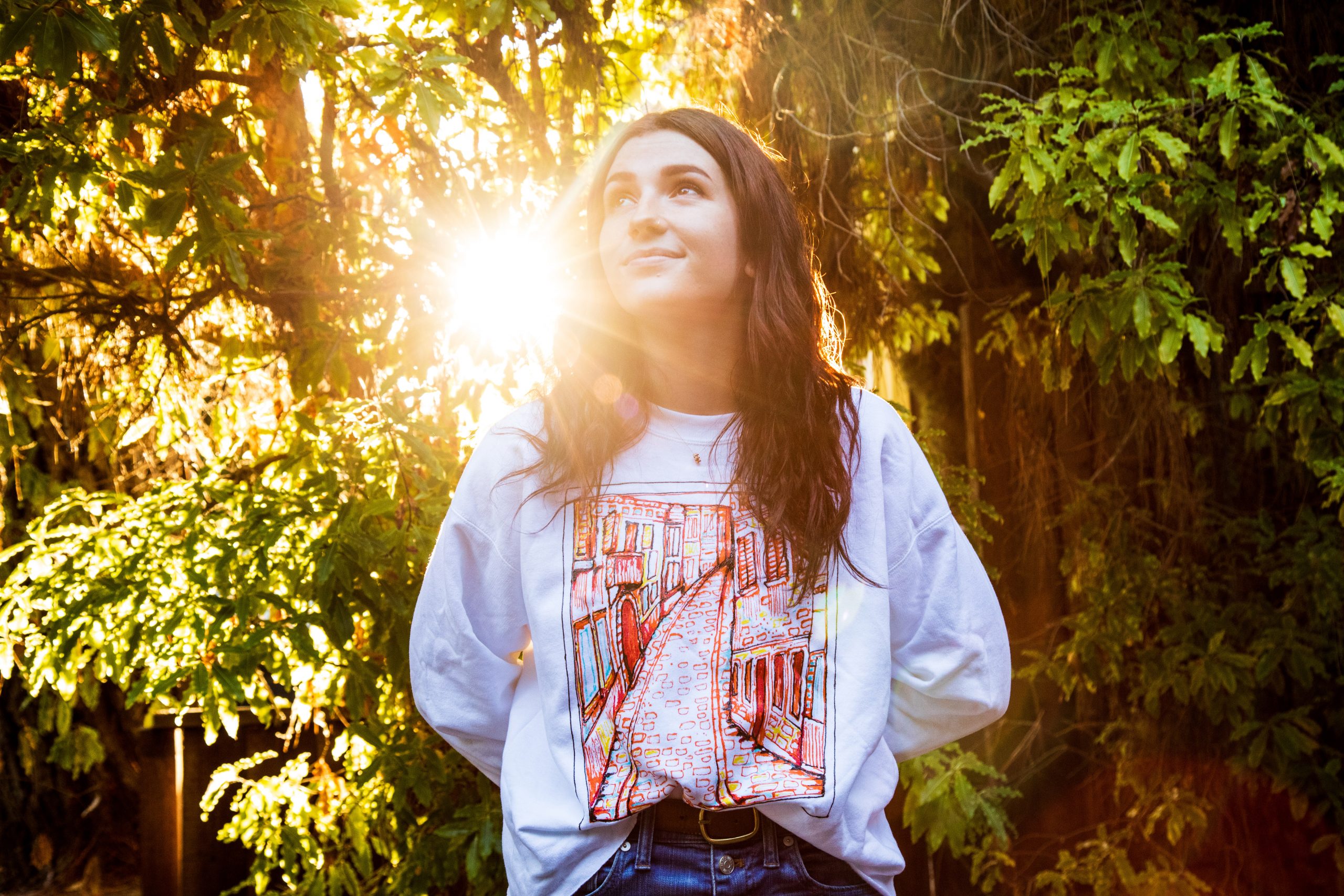 Home Topics Arts & Culture Art as Advocacy: Elaine Giles imagines a world where all can flourish

Elaine Giles had big plans following her graduation from Point Loma Nazarene University in the spring of 2020. She’d accepted a position with International Justice Mission (IJM) and was preparing to move to the Philippines, where she would work with a team preventing the online sexual exploitation of children. But in June, the job was cancelled due to COVID-19.

Several hours after learning her position had been terminated, Giles printed out a few of her favorite art prints and posted them on Instagram “to see what the response was.” A sociology major, Giles had started designing prints and t-shirts as a hobby. She thought she might be able to turn her hobby into a side gig. Since that day in June, she’s made nearly 4,000 sales.

The immediate and enthusiastic demand for her work meant she launched her own business without stopping to catch her breath, jumping into 80-hour work weeks and managing marketing, packaging, and customer service. “In some ways I didn’t even take a beat to ask, ‘What’s next’?” she says.

What’s next for Giles seems to be a melding of her creative talent and passion to see God’s dream for the world become reality. Now she’s using her business, Art by Elaine, as an agent of change by donating sales proceeds and creating visual art that speaks to the wounds of our time — from racial injustice to gender inequality. Her Etsy shop is booming and her TikTok account draws thousands of viewers daily.

Although running an art business wasn’t premeditated, it seems somewhat inevitable. This career is a melding of what she loves: learning about social issues, making art, and advocating for marginalized groups. “I’ve always been artistic, and I’ve always been sensitive to injustices,” Giles says. “When I was young, the way I processed things I was torn up about was by creating art pieces around them.”

Human trafficking rose to the top of her consciousness in middle school, when her parents brought her to an anti-trafficking event at church. Throughout high school she learned everything she could and began making art around the issue. She won an award for one of her pieces and was invited to speak at a city council meeting — an opportunity that showed her art could be an avenue for advocacy.

This interest in justice work led her to Point Loma Nazarene University. “It was the only school I toured that had a center that was focused on doing something real,” she remembers. The Center for Justice and Reconciliation (CJR) became a focal point in Giles’ Point Loma experience. As a student, she interned with CJR her sophomore year and launched Wear Justice, an event promoting ethical fashion and consumption that continues today.

This kind of student-led change is a hallmark of CJR. “As staff we have this incredible opportunity to come alongside students and encourage them to put action to their faith, to grapple with the impossible questions, and to believe that their ideas can change the world,” says Director Kim Berry Jones.

The collaboration didn’t end when Giles left PLNU. Recently she teamed up with CJR to create a design supporting the Center’s new initiative, the Flourish Academy. Giles’s design is a colorful mass of overlapping butterfly wings, superimposed with the words: “Create a world where all can flourish.” One hundred percent of the proceeds from print and sticker sales will fund Flourish Academy’s work to provide life skills for survivors of trafficking.

The academy is a holistic health curriculum designed in partnership with PLNU’s kinesiology and integrated wellness master’s programs. Giles sees the Flourish Academy as an essential facet to supporting those who’ve experienced trafficking: “If our only focus is getting trafficking victims out of situations of trafficking, we’re missing basically the entire puzzle. We just have one piece filled in.”

Over the years Giles’s understanding and approach to anti-trafficking work has evolved, but her commitment remains unchanged. “My mindset now is more preventative,” she says. “I see so many ways that people are missed by the system before they’re ever even trafficked. How can we as a community do better for kids and for future generations in supporting people — especially low-income people and communities of color — to make sure trafficking is eradicated at that level?” The Flourish Academy helps answer this question by offering a sustainable path away from exploitation. The Academy helps survivors begin anew and create a better future for themselves, their children, and their communities.

“The social injustices we see in our world are deeply complex and deeply rooted,” says Kim Berry Jones. “They are most often systemic and there is no simple solution. And yet, in the midst of that we ask students to dream big — to believe we can change intractable problems — and the best part is that they get it — they believe this and they set out to do it.”

When people ask Giles about the relationship between social justice and art, she points them to movements throughout history that were propelled forward by visual art. “When you look throughout social movements, there’s this common thread [of] bold design.” Art by Elaine continues this tradition by blending art and advocacy, beauty and justice. Even in the pieces that feel “statement-neutral” — her series on cities, for example, or National Parks — Giles hopes the work will point people back to God’s kingdom. “There’s a lot of darkness in our world, and at times I [just want us] to look at beautiful things and remember that there are still beautiful places in our world,” she says. That beauty, in turn, can galvanize us and refresh us on the long road of seeking justice and loving mercy.

Through her involvement with CJR, Giles learned the discipline of hope in the face of injustice. Watching survivors rebuild and move forward with their lives, she says, was one of the most impactful elements of working with CJR as a student. “I do think there’s a very sensationalized, fear-driven story of human trafficking,” she says. But Giles has witnessed people recover, experience joy, create close relationships, and thrive.

“One of the things I learned the most working at the CJR is hope,” she says. “We have a God who believes in restoration. God has amazing powers of restoration for even the people who have been through the worst things imaginable. His ultimate goal for people and our earth is not injustice but flowing-over-everything justice. Flourish Academy is a way of putting that hope to work.”