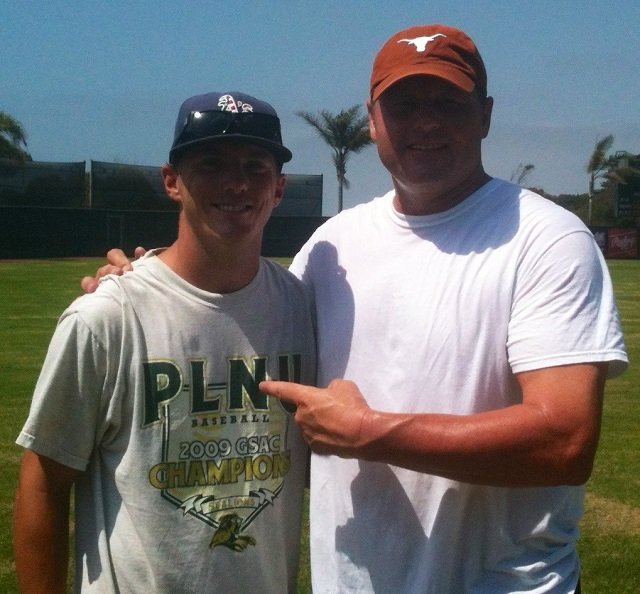 Early on the evening of Aug. 25, seven-time Cy Young winner and steroid-era lightning rod Roger Clemens sat in the locker room of the Sugar Land Skeeters, preparing, at the age of 50, to pitch professionally for the first time in five years.

But before he took the mound for the Skeeters, an independent professional team, and struck out two in three and a third shutout innings in front of just under 8,000 fans, Clemens dashed off a quick text message to PLNU senior catcher Kyle Cameron.

“Hey buddy … Arm doesn’t feel as good as when I was throwing to you … but we will make it happen some way. Anyway, hope to go a couple innings and put a few smiles on some faces. Rocket.”

Cameron, as part of his summer position at PLNU, was working on the soccer field with the grounds crew when a call came in. Rumor had it that Roger Clemens—in town to watch his son play in the Aflac All- American Baseball Classic at Petco Park— was going to be on campus since the high school all stars were using Carroll B. Land Stadium to practice and compete in a home run derby.

Rumor further had it that Clemens was looking to throw a practice session while he was there. Cameron didn’t buy it, even when he saw Clemens on the field later that day.

After a brief conversation that included Clemens giving Cameron his number, they set up to meet back at the field a few hours later.

“He wanted to do it in secret,” said Cameron. “It was after everyone was gone, a couple hours later, just me and him and the guys I work with.”

Cameron describes the first session, one of Clemens’ first in preparation for the game that at that point few people knew he was planning to pitch, as “very deliberate” and “really impressive.” Clemens threw 100 pitches after 30 minutes of stretching and weight work on his rotator cuff. As he did, Cameron counted out the number of pitches Clemens had thrown in increments of 25, and while Clemens didn’t throw as hard as he could, his control is what stood out most as he moved consistently and accurately through all his pitches.

The session ended with 10 minutes of running and the promise of a second throwing session two days later. When they met up again, PLNU pitcher Kellan Stewart and outfielder Trey Hunt happened to be at the field, and Clemens included them in the experience, asking Hunt to stand in as a batter while talking through his process with Stewart while he threw another 100 pitches, the last five of which he threw hard.

“He mostly talked his own mindset and pitching form—how it needs to be a consistent motion no matter what pitch you’re throwing,” Cameron said. “It was almost a lesson (for Stewart) except he was the one pitching.”

Clemens also told them how in every park, he used a marker to line up his pitches. In Toronto, it was the line where the turf came together and ran from the mound to home plate. In Yankee Stadium, the grounds crew mowed the grass in a straight line from home to the plate against the rest of the grain at his request.

“I guess it’s little things like that I’ll hold onto most,” said Cameron, a Valley Christian product who plans to be a teacher and coach after he graduates. “I thought it was really cool how he doesn’t see himself as above the game.”

This impression was further cemented at Thanksgiving when Clemens texted Cameron again to thank him one more time and wish him happy holidays.

“I should be the one thanking him,” he said. “I mean, that’s like the coolest thing I’ve ever done in my life, and he’s thinking of me. I wouldn’t have done anything else that day.” 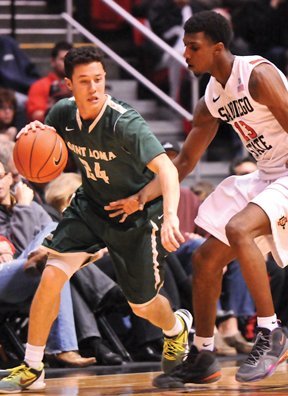 Sea Lions in the Air

XTRA Sports 1360 AM and PLNU have teamed up this winter to broadcast Sea Lion men’s basketball over the airwaves of San Diego. Seventeen PLNU men’s hoops games are being broadcast on the station that is also the radio home of the San Diego Chargers and the Los Angeles Lakers.

“We are very excited to begin this relationship with XTRA Sports 1360,” said PLNU athletic director Ethan Hamilton. “As we continue our move to the NCAA Division II level, this is another piece to our branding effort in the San Diego community. To be able to partner with one of the top sports stations in town is a terrific step for us.”

Judson Richards, PLNU alum and co-host of XTRA’s Charger Power Hour and The Drive, is calling the action. Richards also tapes a weekly segment with Sea Lions head coach Bill Carr that airs on The Drive. PLNU associate athletic director Russ Blunck is also handling play-by-play for some of the contests.

“XTRA Sports 1360 is all about San Diego sports, and Point Loma Nazarene University is an essential part of the San Diego sports scene,” said XTRA program director Brian Wilson. “We’re very excited to add the Sea Lions to our lineup.”

PLNU’s Nov. 17 Homecoming battle against Northwest Nazarene was the first game to be broadcast this season. Each broadcast includes a 15-minute pre- and post-game show.

The Sea Lions finished 12-5-3 in PLNU’s first season competing in the Pacific West Conference and in NCAA Division II. The Sea Lions posted 29 points in PacWest play to finish third in the conference standings this season (9-3-2). PLNU advanced to the finals of the National Christian College Athletic Association (NCCAA) West Regional by defeating Azusa Pacific on the road in the 12th round of shootouts 1-1. The Sea Lions faced California Baptist in the finals of the West Region and fell to the Lancers 1-0.

The PLNU men’s soccer team experienced its first season with new coach Phil Wolf, and although they were not able to get many wins, they grew in knowledge and as a team. Freshman Daniel ten Bosch led the team in goals, and nine underclassmen saw big minutes as starters for the Sea Lions. The men also had Austin Fares and Carter Phillips earn their place on the NCCAA scholar-athlete team.

The PLNU volleyball team finished 10-17 on the season and in eighth place in the 14-team PacWest standings with a 6-10 record. The Sea Lions knocked off Grand Canyon twice in a week’s span when the ‘Lopes were ranked No. 16 and 21, respectively. Four-year letter winner Nicole Eiler rewrote the record books for digs. She registered 38 digs in a match against Cal Baptist to set the new single-match record. She also ended her career with 1,944 digs to eclipse the previous school record holder Jill Konderick’s mark of 1,786.

Kelli LeClair, an outside hitter from Yucaipa, Calif., capped off a fantastic freshman season by being named third team All-PacWest and second team NCCAA All-American. LeClair led PLNU and placed sixth in the conference with 3.71 digs per set. She recorded double-figure kills in 22 of the Sea Lions’ 27 matches. Eiler and Natalie Hamill also joinedLeClair on the NCCAA All-West Region team. Kelsey Barker and Marissa Ellow represented PLNU on the NCCAA scholar-athlete team.

Both the men’s and women’s cross-country teams represented PLNU at the NCCAA National Championships in Cedarville, Ohio. The women placed ninth and were led by Breelan Matranga’s 19th place finish. 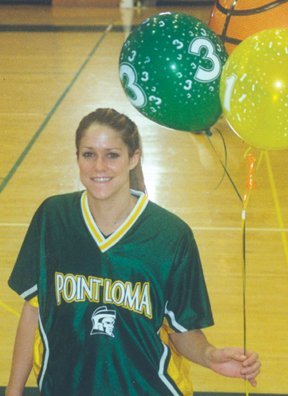 We received excellent nominations of great merit for our 10th individual athletic achievement in PLNU’s history. Our winner, Erin Kellar-Hill (03) was nominated by her husband Arley (02).

“I would like to nominate my wife Erin Kellar-Hill for her athletic achievements at Point Loma. She changed the face of women’s basketball at Point Loma by leading her team to the elite eight in 2003. Along the way, Erin rewrote the record book. By the end of her career, she was the all-time leading scorer and rebounder, as well as ranking 7th all-time in both assists and steals. Erin also won GSAC player of the year in 2000 and was a four-time NAIA All-American and four-time team MVP. Erin also holds the top two places for most points scored in a game. I believe Erin is an excellent candidate for her individual athletic achievements.”

“With her basketball savvy and ability to score in a variety of ways, Erin was the foundation of our first national caliber team. From her freshman year, she was an All-American player in a developing program (conference player of the year as a freshman). When we were able to add young talent around her, the program took off. PLNU women’s basketball had only been in the NAIA Division I National Tournament once in school history (10 years earlier). In her senior year, her fourth as an All-American, Coach Westphal’s team qualified to the national tournament, and advanced to the Elite Eight. Erin’s contribution at the foundation, and that trip to the national tournament, propelled PLNU women’s basketball to eight consecutive appearances in the national tournament.”

Where the World Meets the Street