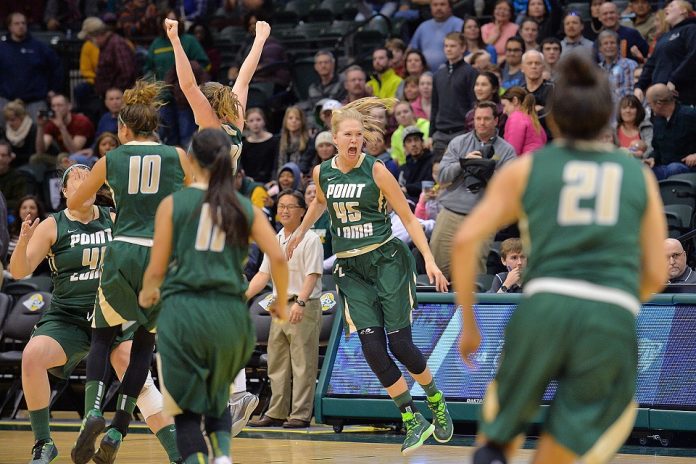 After spending 26 successful years in NAIA’s Golden State Athletic Conference, including earning 43 regular season championships and introducing eight players and coaches into the NAIA Hall of Fame, PLNU was ready to face a new challenge: the NCAA.

PLNU decided to pursue candidacy for the highly competitive NCAA Division II in the summer of 2012.

“We saw some schools in our conference making a move,” Athletic Director Ethan Hamilton noted. “We felt the NAIA was changing and we made a proactive decision to join the NCAA.”

After a three-year transition process, the 2014-15 season marked the first year that PLNU was a full and active NCAA member in the Pacific West Conference (PacWest). All 11 PLNU athletic teams were finally eligible for postseason play in the PacWest and NCAA, and the Sea Lions took full advantage of it. The newcomers made their name known in their conference, with two teams making regional playoffs— the women’s soccer team and women’s basketball team.

“When we decided to go NCAA Division II, this is what our athletic director said we were building for,” PLNU head women’s soccer coach Tim Hall explained, “And not just administratively but with each team and in recruiting. I thank God for the girls we have and their quality on and off the field, and for God’s timing, which has been incredible.”

There was no shortage of success for the women’s basketball team, either. The squad, led by first-team All-PacWest senior Jessica Escorza, placed third in the PacWest Conference, going 15-5. That set up PLNU for a shot in the NCAA Western Regionals, where the team earned the No. 8 seed and faced the No. 1 ranked team in the country, Alaska Anchorage, in the first round of the NCAA tournament. The Sea Lions pulled off an upset, snapping Alaska’s 20-game win streak and claiming a victory after a 64-63 buzzer-beater in front of the Anchorage home crowd.

For the first time in PLNU’s history, the Sea Lions earned an NCAA tournament victory. “The energy that we came out with as a whole throughout the entire game was what really brought us to a win,” Roya Rustamzada, PacWest Freshman of the Year remarked. “I feel as if it was one of the best games we have performed together as a team. We should all be proud of how far we’ve come this season.”

The women’s soccer and basketball teams are just two examples of the phenomenal growth PLNU Athletics has experienced since joining the highly competitive NCAA.

“We came out of the chute quickly in our first year as an active member and have earned the respect of the NCAA in all of our sports,” said 14-year PLNU coach Art Wilmore, who has coached men’s basketball and men’s and women’s tennis.

Considering the success of the 2014-15 women’s basketball and soccer teams, in addition to the red-hot men’s baseball team, Hamilton thinks PLNU is on track for a season with even more growth.

“Success breeds more success,” Hamilton said. “More people are interested in being a part of a successful program.”

In addition to athletic success, PLNU student athletes are becoming more competitive in the classrooms.

If PLNU’s first season as an active member in the NCAA was any indicator of what is to come, the Sea Lions are looking at success for years to come.

“This has been an exceptional year,” said Hamilton. “Our coaches and staff are doing such a great job that this will be a sustainable pattern for the future.”

Coach Wilmore agrees: “We have positioned ourselves to explode in our recruiting and therefore in the success of each program.”