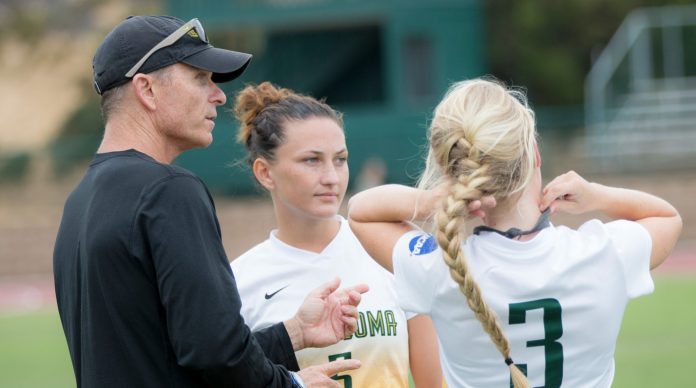 It’s hard not to notice the posters that cover the north-facing wall of former soccer coach, and now athletics chaplain, Tim Hall’s office. Prominently displayed next to his door and emphasizing his passion for people and relationships are photos of every soccer team Hall coached at PLNU. More than 500 student-athletes, 22 years of coaching, and a career marked by ministry, mentorship, and athletic success are represented within these posters. The Viewpoint sat down with Hall to hear more about his journey at PLNU.

Q: You played soccer at PLNU as an undergraduate student. Where did your interest in the sport first spike, and how did you end up discovering a passion for coaching?
A: I was raised in Africa as a missionary’s kid and grew up playing more of the African British-type sports — rugby, cricket, field hockey, soccer, cross country (barefoot), and that kind of stuff. But soccer was one I really clicked with. I had other options for schools to play soccer at but I wanted to come to Loma because I was raised in the Nazarene church and I wanted to be part of the school. I ended up getting a soccer scholarship and was coached by Dr. Leon Kugler, who deeply impacted me by how he used soccer to build relationships. The impact of PLNU on my life was so much bigger than soccer and I always thought it would be neat someday to come back here to coach and use it as an avenue to reach athletes, like what had been done with me.

Q: At the conclusion of the 2017 season you retired and moved into a full-time teaching role at PLNU. Why was that the right time to make that move?
A: I had been coaching men’s and women’s soccer for 22 years. The only things I’d done longer than that are be a husband to my wife, Tracy, and parent my two kids, Tyler and Tara — so it was very tough walking away from something that was deeply ingrained in me. I had given it a lot of thought and prayer and decided that I was at a stage in my life where teaching was the most intriguing path for me and my family going forward. Announcing my retirement to the team was very emotional and I think it shocked many of them, but they celebrated and supported my decision. When you get to know somebody well enough and that person says, “This is what I think is really important for me now,” you listen and respond with love, even though it may be hard.

“One of my favorite things about Tim is the way he embraces the families of his athletes. After a game, Tim would go over to my dad, give him a bear hug, and tell him that he loved him. It made my dad feel so loved and included in the program and it honestly made a huge impact in my dad becoming a Christian. Tim makes time for everyone and makes each person feel like he or she is the most important person in that moment. I knew that I mattered in this world when I was around Tim. It’s incredible, the way he makes people feel loved, embraced, and like they belong.” — Natalie (Swift) Lawrence (15)

Q: You have a passion for international ministry and you took eight of your teams on Loveworks trips. Can you recall any experiences that really left an impact?
A: I had a student playing here for me who told me he had a buddy in Holland named Derrick Thames (06) who was getting ready to sign a pro contract. Derrick had just accepted the Lord as his Savior and was debating whether professional soccer was the lifestyle he wanted. Coincidentally, I was invited to be a guest coach with the same club in Holland that this young man was going to sign with. Well, he had been injured and it was raining one day during training. He was sitting in the dugout next to the field by himself, so I walked over and started talking to him. He ended up coming back to the U.S. after that for some surgery and I invited him to come check out PLNU. He visited and ended up signing and playing for us. One of those years, I took him on a Loveworks trip to Africa and it was at that time he felt called to international ministries. After graduation, Derrick and his wife, Dana, signed up as volunteer missionaries with the Church of the Nazarene, spent a year in Kosovo, and because of that, now he’s a full-time pastor of a church in Scotland. Just an amazing story.

I also got to take my family to Africa on a Loveworks trip to Zimbabwe, which is where I was raised. I got to show them the house I grew up in, the schools I went to, and a piece of my life that’s very deep in my heart.

Q: Alongside your teaching responsibilities, you also serve as chaplain of the athletic department. What does your role as chaplain look like?
A: There’s a lot of life that goes on in an athletic department beyond the fields and the courts. My role as chaplain is integrating myself with individual coaches and teams to serve them. At times, coaching can be a very lonely profession and it can feel like you’re walking it alone. Maybe you’ve made an unpopular decision, you’re dealing with hard life stories from your players, or things may not be going well in the win-loss column — those things are hard to show up day-in and day-out for. But you can’t not show up, and sometimes showing up is lonely. I hope to be the person who can walk alongside the coaches in those lonely moments, who, after a lost game, comes up to the coach and says, “I love you.” Who doesn’t unpack the game or give an opinion, just looks them in the face, and tells them, “I love you and you are a great coach.”

Q: As you look back on your journey so far at PLNU what is one thing you’ll always take with you?
A: What sticks with me right now are the relationships I’ve built with these students over the years. There’s an intertwining of life together that happens through all the things we’ve done like national tournaments, road trips, mission trips, and just building relationships. These kids have become my kids. I’ve officiated their weddings, seen them discover passions, walked with them through the sorrows of losing family members, family illnesses, struggles, breakups, victories, all the good and the bad times. Our relationships are intertwined in such a way that soccer is what brought us together, but there’s so much more that holds us together.