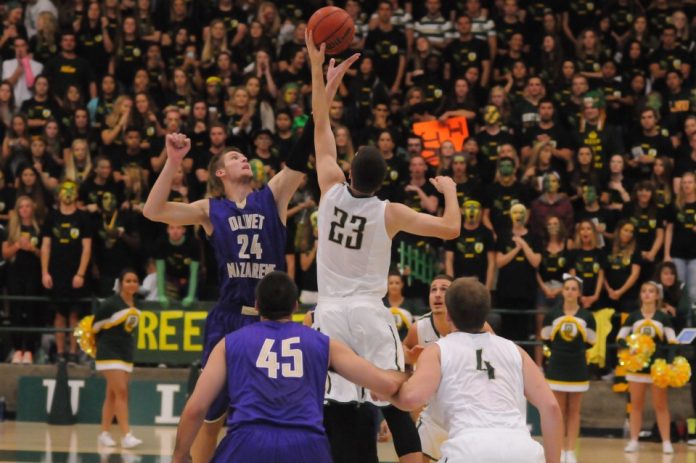 Hayden Lescault catches the ball at the top of the key. He fakes right and drives left. Time is winding down and the clock is below three seconds. Lescault has beaten his man but there is another defender waiting for him in the paint. Lescault gathers the ball to go up for the layup but the defender meets him in the air. Still the clock is ticking away. Lescault manages to see just enough daylight to get off a left-handed scoop shot. There is a collective gasp from the full-capacity audience as they watch the ball slowly roll over in the air, onto the rim, and into the net for the game-tying basket at the 2013 Homecoming celebration.

That basket by Lescault tied the game at 83-83 with 0.6 seconds remaining in regulation and sent the paint-clad crowd into hysteria. The Sea Lions seized that momentum from the crowd and took it into the overtime period to outscore Olivet Nazarene University (11-3) in the final frame en route to winning the game 94-86.

PLNU got 21 points apiece from Lescault and Marek Klassen to lead four Sea Lions in double figures. But it was Lescault who was the go-to guy down the stretch for PLNU. In addition to making the game-tying layup at the end of regulation, he then scored five of his 21 points in the extra time to lift the Sea Lions to the win. The junior from Folsom, Calif., hit 6 of 12 from the field and 8 of 10 at the line to score a season-high 21 points. He also added a career-high nine assists in the win.

Lescault’s drive capped off a comeback for PLNU in the second half, in which it trailed by as many as 10 points. The Sea Lions kept chipping away at the Tigers’ lead, but could never take the lead. PLNU finally tied the game at 81-81 with a layup by AJ Ussery and 2:39 remaining. ONU’s Austin Davis then answered with a jumper before Lescault hit his game-tying layup to  force overtime.

In the extra period, PLNU turned up the defensive pressure and held ONU to just 1-for-5 after they had shot at 67 percent in regulation play. PLNU was no better from the field in the extra five minutes but went 9-for-10 at the line to earn the hard-fought victory.

“Our guys kept fighting and fighting to give  us a chance to get into overtime,” said Coach Carr. “We made our free throws and got a couple stops when we needed them. We just hung around long enough to keep them on their toes, and we got a win that maybe we didn’t deserve but we’ll take it.”

Ussery scored all eight of his points in the final four minutes of regulation and overtime. Judd Welfringer also chipped in with 17 points on 6-for-9 shooting, and Junior Morgan hit 10 of 12 from the charity stripe en route to scoring 14 points. He also had a team-leading six rebounds.

Austin Davis had 21 points to place five ONU student-athletes in double figures. Zach Wagner had a double-double with 11 points and 10 rebounds.

PLNU was able to overcome ONU’s great shooting performance thanks to going 29-for-37 at the free-throw line and committing just 14 turnovers compared to ONU’s 24. However, it’s the people off the court who Coach Carr credits with the win.

“The crowd kept us energized and was able to get them out of rhythm a little bit,” said Carr. “I have no doubt in my mind it was our crowd in the second half that helped us win this game.”

It is a rare occasion when any team can conclude their season as national champions, but that is exactly what the PLNU volleyball team did. The Sea Lions capped off a surprising and hard-fought season last week by capturing the National Christian College Athletic Association (NCCAA) Championship in Kissimmee, Fla.

PLNU began the season picked to place sixth in the Pacific West Conference preseason polls. Head coach Sarah Gustin brought back a very young team in her third season. The returners were nearly all sophomores, and although they each saw minutes in PacWest play in 2012, most were still by definition very inexperienced. PLNU lost just two players from its 2012 team, but at the critical positions of setter and libero, and were counting on the additional year of maturity from the young team to pay great dividends. Coach Gustin was able to turn inward to fill the holes at setter with sophomore Savannah Wedemeyer stepping into the starting spot and former NAIA All-American Alyssa Dwyer returning to middle blocker after redshirting the previous season with an injury. Filling the libero spot was not as easy. Coach Gustin hit the recruiting trail and brought in a quality freshman, Christin Fisher, out of Vista Murrieta High School.

When the team came together in fall camp, there was an aura around it that couldn’t be identified, but was evident from the first serve. The letter-winners returned with focus, strength, and team unity. This was particularly apparent in the sophomore group. Coach Gustin turned to Wedemeyer to take over at setter in her 6-1 system. On the outside, preseason All-PacWest selection Kelli LeClair was joined by Heather Leavitt, who turned heads every step of the way during camp. The Sea Lions knew what they were getting from Dwyer on the court in terms of performance, but her impact on the team might have been even greater in her leadership role. Dwyer was the vocal leader on the floor for the team all camp and into the season. She gave the Sea Lions that additional edge, confidence, and swagger. Juniors McKensey Wise and Delaney McCraney helped stabilize the middle and opposite side hitter positions, respectively, while Fisher stepped in flawlessly to take over as starting libero.

As always, the Sea Lions opened the season at home by hosting their annual Seaside Invitational. PLNU won both its matches on the opening day, but it wasn’t until coming from behind to win a five-setter with Cal State Dominguez Hills in the third match of the season that everyone started to take notice. PLNU went 4-0 in its opening tournament and then picked up a win against San Diego Christian to start the year 5-0. PLNU then scuffled at the UC San Diego tournament, going just 1-3. However, their lone win was one of the Sea Lions’ most impressive of the season as it defeated No. 18 Cal State San Bernardino in five sets. CSUSB would go 27-6 on the season and receive the No. 1 seed in the NCAA West Regional.

PacWest play then started for PLNU. It opened conference play with 11 straight wins and sat in first place in the PacWest standings for much of the early season. Along the way, the volleyball team made PLNU history. On Oct. 14, the Sea Lions were ranked 25th by the American Volleyball Coaches Association, which is the official ranking party for the NCAA. This is the first time in PLNU history that any athletic team has been ranked in an NCAA poll. The Sea Lions’ winning streak snapped on the road at BYU-Hawaii in four sets. The team dropped out of the top 25, but returned to the rankings multiple times during the season. PLNU completed its regular season at 23-7 and 16-4 in the PacWest. The Sea Lions finished in sole possession of second place in the conference standings—the school’s best finish in its two-year association with the PacWest.

PLNU was recognized throughout the conference for its outstanding season. The Sea Lions led the PacWest in first-team all-conference selections and placed four on the All-PacWest squad. Dwyer was voted the PacWest Newcomer of the Year after ranking fifth in the league with 3.35 kills per set and ranking third with a .344 hitting percentage. Leavitt joined her on the all-conference first team after leading the Sea Lions and ranking third in the PacWest with 3.96 kills per match. She was also 14th in digs per set (3.58). LeClair gave PLNU three first-team All-PacWest selections. She fulfilled the coaches’ season predictions by earning first-team honors after ranking eighth in the league in kills (3.25) and 18th in digs (3.16). Wedemeyer represented the Sea Lions on the second team after just one setter qualified for the first-team squad. Wedemeyer led the league in total assists (1182) and ranked second in the conference with 11.37 assists per set. Gustin was also voted as the co-Coach of the Year by her peers.

Even though PLNU is in its final year of transition to the NCAA and therefore not allowed to play in its postseason contests, the Sea Lions still had the opportunity to continue their season after PacWest play as part of the NCCAA. PLNU took down Azusa Pacific in the West Regional Championship to earn the automatic bid from the West into the national championships in Kissimmee, Fla.

The Sea Lions received the No. 1 seed at the NCCAAs and won all four of their matches in pool play to advance to the national semifinals. PLNU faced off against the No. 2 seed, Lee, in the semifinals and swept the Flames en route to advancing to the championship match. In the final they saw a familiar opponent: Azusa Pacific. This was the fourth time this season the Sea Lions faced the Cougars. Each team won at home in the PacWest season, and then PLNU took the regional final from APU to earn the automatic bid. In the finals, PLNU set out to prove once and for all it was the best team in the tournament. PLNU won each of the first two sets against APU and went on to close out the match in four sets to become the 2013 NCCAA champions.