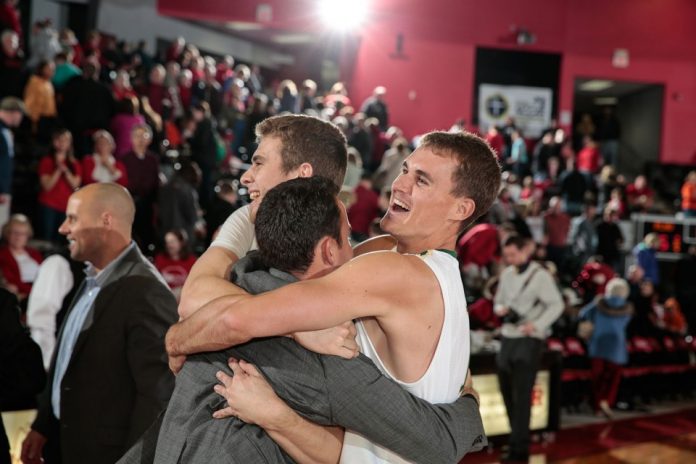 At the end of every basketball season, there are only a handful of teams throughout the country that can call themselves national champions, and in 2014, PLNU is a member of that elite group, as the Sea Lions took down Grace College 75-73 in the NCCAA title game.

This is the fourth NCCAA men’s basketball title for PLNU after winning three straight from 1984-87. The victory was the Sea Lions’ 20th of the season and fifth in a row. It is also the second time in Coach Bill Carr’s three seasons with PLNU that the Sea Lions have reached the 20-win plateau.

The last victory of the season did not come easy for No. 4-seeded PLNU, which got all they could handle from tournament host and No. 7 seed Grace. The Sea Lions fought all 40 minutes and through a number of different Lancer comeback attempts to earn the NCCAA Championship.

“I am very proud of these guys for sticking with it all year,” said Carr. “We had ups and downs and injuries. Just to get to this point and play for a national title is all you ask for from your players as a coach. And to actually get it done is something they will remember forever.”

Grace started the game strong and had a five-point lead (28-23) with five minutes remaining before the Sea Lions found their rhythm on offense. PLNU would go on a 15-3 run to claim their first lead since it was 6-5 to take a 38-35 advantage into the locker room.

After Grace made a free throw to start the second half and cut the Sea Lions’ lead to two, PLNU answered with a 7-0 run to take its largest lead of the game at 45-36. The Lancers then started to chip away, but the Sea Lions never relinquished the lead. Grace cut it to two points twice during half, and had it down to one with 14 seconds left, but each time PLNU answered with a basket to extend its lead.

The second time Grace cut it to two came with two minutes left as the Lancers hit a three-pointer to slice the lead to 70-68. But Judd Welfringer had the answer for PLNU as he knocked down a jumper in the paint to make it 72-68 with 1:16 remaining. A free throw by Hayden Lescault extended that lead to five with 43 seconds left, and PLNU looked to be in control. But, after missing a pair of free throws, including the front-end of a 1-and-1, Grace was back in the game.

A jumper by Greg Miller cut the lead to one point with 14 seconds left. Then Lescault was fouled and knocked down both free throws to put PLNU back up by three. Coach Carr then elected to foul rather than allow Grace to put up a three-point shot. Grace’s Logan Irwin made the first but missed the second, and PLNU collected the rebound with 7.2 seconds remaining.

The Sea Lions tried to inbound the ball against Grace’s press but got trapped in the corner and lost the ball out of bounds with just less than seven seconds left. Grace then inbounded the ball with a chance to tie or win the game, but Logan Irwin was hounded by outstanding defense from AJ Ussery on the final possession. His 3-point attempt barely drew iron as the clock expired, and the Sea Lions stormed the floor as the 2014 NCCAA Champions.

“I thought the whole group made big plays and answered every run Grace made,” said Carr. “We had great scoring. The ball was moving and the guys were relying on each other. It was a fantastic team win.”

Lescault, who was named an NCCAA All-American, led five student-athletes in double-figures for PLNU with 14 points. He also added a team-leading five assists. Junior Morgan recorded his fifth double-double of the season with 11 points and a game-high 10 rebounds off the bench. Ussery and Marek Klassen also added 13 points apiece, while Sam Okhotin came off the bench with 10.

PLNU shot 53 percent in game and held Grace to just 42 percent shooting. The Sea Lions also dominated the glass as they out-rebounded the Lancers 31-23 and outscored them 10-5 in second chance points. PLNU’s bench also outscored Grace’s 21-11, thanks to the efforts of Okhotin and Morgan. Greg Miller had 22 points to pace Grace. Brandon Vanderhegghen also added 19 points.

“I am really happy for the guys,” Carr added. “They worked hard all year for the opportunity to play in the [NCCAA] national tournament. It was great for them to get three wins. We were efficient offensively, and we got the job done defensively, and at the end we had 75 and they had 73. That is all that mattered.”

PLNU lost just two players to graduation off its NCCAA national championship team. The Sea Lions will return seven student-athletes from this team next year, including PacWest All-Conference selection Lescault and honorable mentions Klassen and Morgan.

This was the second NCCAA Championship for PLNU this season as the Sea Lions volleyball team also won the national title back in December.

PLNU senior Kelsey Barker is the president of the Student-Athlete Advisory Committee (SAAC), which consists of two representatives from each varsity athletic team. The group’s goals are to increase school spirit, better the student-athlete experience, take part in community service and engagement, and fundraise for the Make-A-Wish foundation.

This year, SAAC participated in the Bread of Life Homeless Ministry. Nearly every Saturday of the school year, at least one sports team has volunteered at a church in Ocean Beach that serves food while the pastor reads excerpts from the Bible.

“The student-athletes love serving at the church because it is an opportunity for us to meet and engage in conversation with a variety of people, all with a different story,” Barker said. “All the athletes and staff have begun building relationships with the people they serve, as well as with the church staff—it’s amazing to see.”

SAAC also participates in SUPERFEST, a huge event put on by PLNU Athletics and The Rock Church, where children from all over San Diego come to PLNU’s campus to hear testimonies of famous athletes and get a chance to play sports with and learn from PLNU student-athletes. From the feedback received about this event, entire families love the opportunity to meet PLNU’s student-athletes and play a variety of sports
with collegiate teams.

This year was the first year that SAAC also decided to participate in Operation Christmas Child, an organization that gives shoeboxes filled with age- and gender-appropriate gifts to children during the Christmas season.

“SAAC asked each team to make at least two boxes to donate to this organization. Some teams exceeded the request and made more boxes, which was awesome! We plan on continuing to do this in the future,” said Barker.

In addition to these events that SAAC plans or helps plan, each sports team participates in additional community service events and activities throughout the year.

This year, all schools in the NCAA PacWest Conference were challenged to raise $3,000 for a good cause. When assistant athletic director Steve Riddle caught wind that the cause in question was the Make-A-Wish foundation, he decided to get involved.

The Make-A-Wish foundation holds personal meaning to Riddle because of former PLNU Hall of Fame volleyball coach Barb Wnek, whose young daughter suffered with a rare cancer for several years and was positively impacted by the foundation.

The students were raising funds for Make-A-Wish via Penny Wars, selling Make-A-Wish stars, and bake sales. But Riddle was inspired to do something additional on his own.

“I wanted to show our student-athletes that this is a really powerful thing that they could be a part of,” he said.

That’s why he decided to use his favorite hobby, bicycling, to raise money.

“I’ve always wanted to ride for a cause,” Riddle said, “but I never found [the right] one. Make-A-Wish does so much good in the lives of others. This was one of those things where I just said, ‘This is what I want to do.’ So I did.”

When it came to patronage, Riddle confidently encouraged his donors: “Donate five cents or even 25 cents per mile that I ride. Don’t donate a dollar per mile because I’m going to send you to the poor house.”

With a bike ride from Irvine to San Diego for his birthday and several bike rides from San Juan Capistrano to San Diego, Riddle proved that determination and commitment are everything, and he’s healthier for it.

“I was not only impressed by Steve Riddle’s bike riding and how many miles he rode, but I was also impressed by how much support he got along the way,” said Barker. “It was awesome to see how passionate he was to start this fundraiser, and SAAC is really proud of what he has done.”

Wise was also ecstatic about Riddle’s commitment and support of the Make-A-Wish Foundation.

“I think it’s really cool that he found a way to use something that he loves to do to help others,” she said. “Not only did he raise a ton of money for Make-A-Wish, but he also raised a ton of awareness. Steve has shown us that raising funds does not have to be a chore and that anyone can do it.”

Riddle hopes to make this an annual venture.

The PLNU women’s soccer team’s win against Azusa Pacific at the NCCAA West Region Championship was a highlight of the season. Another highlight was what came next off the field.

With the victory at the regionals, PLNU earned the right to travel to Kissimmee, Fla., and compete for the NCCAA Championship. While there, the Sea Lions participated in a Feeding Children Everywhere event held at the center for the Fellowship of Christian Athletes. The Sea Lions, along with the other seven men’s and women’s teams that reached the semifinals, packed over 60,000 meals in two hours to be delivered to hungry children around the globe.

“It was a very unique experience because so often when you compete, it is just about winning. But this allowed us to give back to the community,” said PLNU senior midfielder Carly Rivera. “This was as rewarding as just being there. You can grow so much as a team when you commit yourselves beyond your personal goals and put yourself out there to help others in need. This really brought us team unity, and we still have inside jokes about it today. This definitely helped us grow closer as a team.

“It is crazy to think what a small combination of food can do to help feed those who are hungry in the world,” Rivera continued. “You don’t realize before how doing something so small can make such an impact on someone else’s life.”

Transforming the Future. Together.