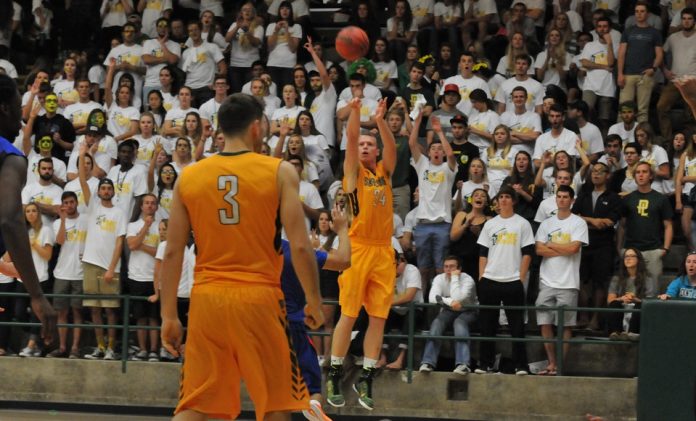 As he sat on the bench in his first official college basketball game, Sam Okhotin tried not to let his emotions take over. It was 2012, and PLNU was taking on Loyola Marymount University. Okhotin’s name was called. As he jumped onto the court, he realized he’d worked his whole life for this moment.

Bigger, faster, stronger players surrounded him. The speed of play was intense.

Suddenly, the game he’d played his entire life seemed unfamiliar to him.

Flash forward: Okhotin is now entering his senior season as a PLNU forward. His 3-point shooting is off the charts. It’s all due to his unparalleled work ethic.

Last season, Okhotin led the PacWest Conference and ranked sixth in the NCAA with a .475 3-point shooting percentage, a phenomenal achievement. To put this statistic into perspective, in the 2014-15 season, Kyle Korver of the Atlanta Hawks held the NBA’s second-highest 3-point percentage with .492. That shows some serious focus on Okhotin’s part.

Teammate Mike Planeta admires Okhotin’s dedication to perfecting his craft. According to Planeta, it’s no surprise Okhotin is leading the pack.

“It’s not a coincidence that he is the top 3-point shooter in the conference,” Planeta said. “He puts in rep after rep after rep. He always gets in his work.”

Okhotin’s gift is not just sheer talent. While there’s plenty of that, his career stats show he wasn’t always as successful with his 3-pointers. During his freshman year, for example, his percentage was just .270.

“What I didn’t realize going from high school to college basketball was how much more outside work was needed,” Okhotin admitted. “Everyone on this level is talented and athletic.”

His freshman season got off to a rough start. The team struggled through a 9-game losing streak, and Okhotin’s shooting went into a bit of a slump. “That’s when I realized what I was doing individually really wasn’t cutting it,” he said.

Finally a teammate pointed out to Okhotin that for him to be successful in college basketball, he had to put in four times as much work as he did in high school. That’s when Okhotin’s mindset changed, and his game plan, too.

“I realized how important it is to come in on your own time,” he said.

Going into his sophomore year, #34 started putting in extra hours after conditioning. He set a benchmark for himself: each day after practice he’d hit 400 shots. The discipline paid off. In Okhotin’s sophomore year, his 3-pointer percentage increased from .270 to .425.

“I think when I really started to play better was at the end of my sophomore year, when we made our run to win the national championship. We had a few guys quit the team that year, which opened up opportunities for some of the younger guys like me,” Okhotin said. “Toward the end of my sophomore year, I started picking up confidence. I let it fuel me throughout the summer into my junior year.”

It did more than fuel him; it ignited him. Okhotin was shooting with about 75 percent accuracy.

“Seeing that work pay off was really rewarding,” he said. “That start is what gave the coaching staff confidence in me.”

But that wasn’t enough. Okhotin said he wanted to have an even stronger role his junior year.

“I knew if I wanted consistent playing time, I really needed to be consistent in my play,” Okhotin said. He revamped his routine. Instead of shooting 400 shots after each practice, his goal was to make 400 shots.

“When I was shooting, I tried to have the mindset that these were game shots,” he said. “I was imagining the crowd on the sides, the defenders flying at me. I tried to get in that mindset so when game time came, it was nothing new. I’d made these shots already. That’s when I was able to turn off my brain and let the muscle memory work.”

“College basketball is really fast,” Carr explained. “Sam was able to slow the game down. He has practiced that shot so many times, it has become really easy for him.”

Okhotin said one reason he worked so hard was so his coaches could have full confidence putting him into any game situation.

“Sam is a guy who always does the right thing,” Planeta said. “Whether it’s getting in his workouts, always running to the end of the line, or earning the top grade point average on our team, he just does things the right way.”

Last season, Okhotin earned the team’s Sportsmanship Award, and it’s no wonder why.

“As teammates, you see each other’s true character,” Planeta said. “Never once have I ever seen him exhibit a bad trait. I can genuinely say he is the single best teammate I’ve ever had.”

As humble as he is talented, Okhotin is quick to credit everyone else around him for his success. He said the reason he had so many chances to shoot is because of the caliber of his teammates around him.

Okhotin’s strong work ethic is apparent not only on the court, but in the classroom, too. He was just named to the National Association of Basketball Coaches Honors Court. This highly prestigious award recognizes men’s basketball student-athletes who are excelling in academics. As a business administration major with an emphasis in accounting, Okhotin earned a 3.56 grade point average in his junior year. He has also been named to the PacWest All-Academic team each of his three years at PLNU.

Coach Carr sums it up well: “The bottom line is, Sam’s success is a direct correlation of his work. He works hard, and he gets better.”

Okhotin has come a long way since that first overwhelming game as a freshman. As a senior, he’s a leader on the team, and is looking to continue growing as a versatile player.

“My personal goal is to expand my game and become an all-around threat,” he said. “I want to be more than just a shooter, and I want to be able to put the ball on the floor and create plays for my teammates as well.”

The team’s goal? “Win our conference and make a run in the national tournament!” Okhotin said.

To see Okhotin and the Sea Lions in action this season, visit plnusealions.com for a complete schedule.

A Bear on the Loose: When Habits are Mindless and Stress Goes Unchecked

Ivy and the Children of Ghana: A Story of Healing

How to Form Healthy Habits that Last