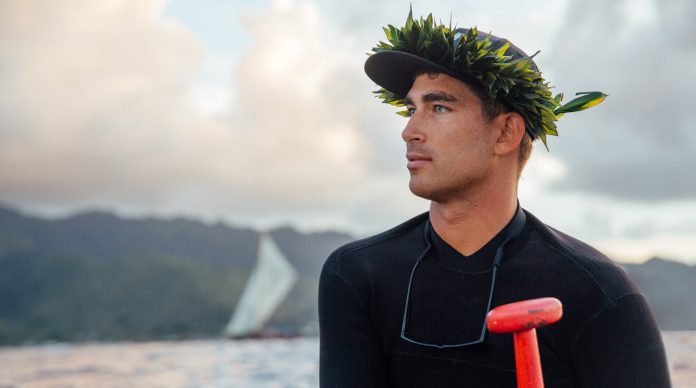 The welcome home celebration for the voyaging canoe Hokulea was three years in the making. It took 245 crew members working in rotating groups of 14 or so to complete Hokulea’s historic circumnavigation of the globe, and PLNU alumnus Austin Kino (10) was one of them.

Kino joined the Polynesian Voyaging Society (PVS) when he was in high school. He sailed on the Hokulea for the first time in 2005 on a voyage from Kauai to Niihau. According to the PVS, the Hokulea, which means “Star of Gladness,” was the first traditional Polynesian double-hulled sailing canoe built in 600 years. It has been sailing since 1975, and its recent trip around the world was its greatest achievement thus far.

“Malama Honua, which means to care for Island Earth, was the mission,” Kino said. “The entire voyage was about celebrating indigenous knowledge, advocating for issues affecting the ocean, and learning about the issues affecting other communities.”

Hokulea’s worldwide voyage was also intended to raise up a new generation of voyagers and navigators and demonstrate that celestial navigation, or traditional wayfinding done without any modern technology, was possible throughout Polynesia and beyond.

From early on, Kino demonstrated his commitment to the Polynesian Voyaging Society’s ideals. He also showed promise as a sailor and navigator.

“When I graduated, I was invited to join a group of young Hawaiians beginning to learn Polynesian wayfinding,” he said. “During college, I returned to the crew each summer.”

In 2014, when the Hokulea began its epic journey around the world, Kino was asked to serve as an apprentice navigator on the first leg of the voyage. He and the crew of 14, which included two other apprentice navigators, sailed from Hawaii to Tahiti — a trip that took 17 days.

In addition to the apprentice navigators who rotated 48-hour shifts of navigating by the stars and currents without any modern instruments to help them, the Hokulea crew included researchers, environmental experts, and political leaders. There was also a master navigator who oversaw the work of the apprentices.

“The master navigator was there but was very hands off,” Kino explained. “We were given more responsibility as our sea legs grew longer.”

For Kino, the most memorable part of that first leg of his and the Hokulea’s journey was the day they first sighted land.

“That first land sighting, we realized we were responsible for ‘fishing the island out of the sea,’” he recalled. “It was an aha moment as apprentices, and our success made us more confident. We were able to have greater trust in our skills and abilities.”

In 2016, his crew voyaged from the U.S. Virgin Islands through the British Virgin Islands to Cuba and then to Florida. That journey included a visit with Richard Branson of Virgin Airlines, who has been a big supporter of Malama Honua, and a trip to NASA’s Kennedy Space Center at Cape Canaveral. The latter visit was significant, Kino said, because part of the inspiration for the worldwide voyage came from Lacy Veach, one of Hawaii’s two astronauts.

In 2017, Kino sailed from Easter Island and finished in Tahiti. In June, he was in Hawaii when the Hokulea returned home.

“Each time, the commitment was to be away from work and home for about a month,” he said. “All our time was volunteered. That was actually probably the hardest part.”

Neither Kino nor the Hokulea will be staying home long. Kino is slated to be part of a crew on Hokulea’s next mission: sailing throughout the Hawaiian islands to share stories and lessons from the worldwide voyage with local communities.

For his efforts, Kino was named one of Hawaii Business Magazine’s “20 for the Next 20.” His role on the Hokulea and his community work sharing his experience garnered the magazine’s attention. But his new business venture holds the promise of being another important contribution to Hawaii’s community.

At PLNU, Kino was a business major with an emphasis in entrepreneurship and finance.

“At the conclusion of the last leg [of the worldwide voyage], I had this idea,” Kino said. “I approached the hotel near where I grew up and offered them an educational canoe experience. They accepted, and now my business, Holokino Hawaii, enables me to share my experience with Hawaii’s visitors. Sometimes there is a disconnect between tourism’s portrait of Hawaiian culture and local people’s view of culture. I realized I could take my skills and sailing experience and help bridge that.”

Kino noted that people’s interest in the Hokulea’s journey; the Disney movie, “Moana,” on which the PVS consulted; and visitors’ desire for authentic travel experiences have helped boost interest in the experience his company provides.

“So far we have had really good feedback from the hotel and local community,” Kino said. “Not everyone can sail on the Hokulea, but this can give people a glimpse into what it was like. Our business allows guests to experience voyaging for an hour outside the reef.”

Kino credits PLNU with helping prepare him for what he is doing now. His most influential experiences included serving as an R.A. for two years, which helped him become a strong leader, and studying under Bob Goff, adjunct professor, attorney, activist, and author, who helped inspire him to be part of making positive change happen in the world.