Home Topics STEM & Health Balancing College with Being a Caregiver 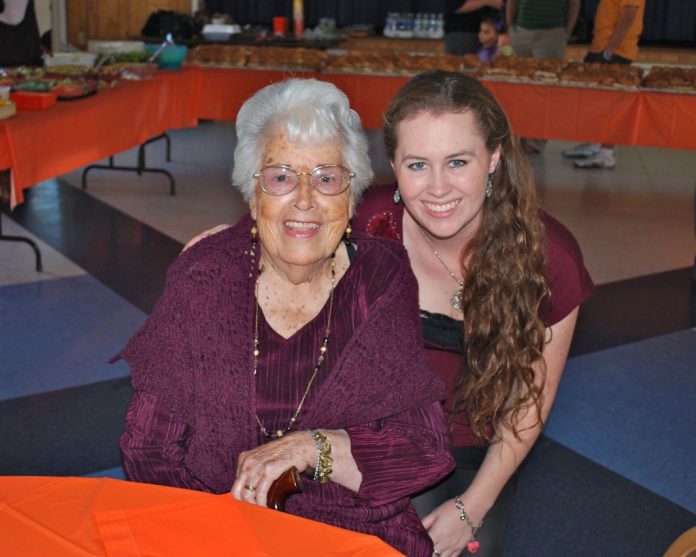 I was not quite two years old when my younger sister, Lizzy, was born. She was tiny and fragile and came into the world quite likely surrounded by angels. I was too young to realize that my path as a caregiver was about to be set into place but also at the perfect age where I wouldn’t know the difference. I became the big sister to a beautiful baby girl whose disabilities would help to formulate my life’s path. Prenatally, Lizzy was diagnosed with Triple X syndrome, also known as 47, XXX. She is, in fact, a “super woman” in that she has an extra female chromosome. She was in the breech position at birth (not uncommon for little ones with chromosomal issues) and was born via C-section with both of her hips dislocated. At the age of five days, she was placed in her first body harness to keep her hips in place. It was also at this point in time that my mother realized my grandfather was slowly walking through the stages of dementia, and life was about to get even more interesting.

My earliest memories include my sister in a pelvic brace struggling to stand and take simple steps. The brace replaced the harness and kept Lizzy’s legs in a “frog position.” She had a quiet and serene personality and always had a smile on her face. While I didn’t necessarily realize that anything was “wrong” with Lizzy, I did soon realize that we were spending endless hours in doctors’ offices, often visiting on a daily basis. The medical and nursing staff that helped to care for Lizzy soon became part of our extended family. I learned at an early age how to help give Lizzy her nebulizer treatments and often grabbed my mother’s stethoscope to listen to Lizzy’s lungs. Unfortunately, Lizzy’s medical problems would get worse before they got better, and while she had countless medical needs, so did my grandfather, who had been diagnosed with Alzheimer’s and was keeping us on our toes.

In the spring of 2000, Lizzy was diagnosed with Legg-Calve Perthes Disease. She had learned to walk in the pelvic brace at the age of 15 months but two years later was suddenly dragging her leg. Legg-Calve Perthes Disease, otherwise known as “LCP” or “Perthes,” is a degenerative hip disease of sorts that typically affects thin, active male children. Lizzy was a super female, was somewhat “chubby” from the steroids she’d been given to reduce her asthma symptoms, and had never had a chance to be active. A Catterall I diagnosis would mean that no intervention would be required, whereas a Catterall IV diagnosis (the worst form of the disease) could be catastrophic. By the end of the year we faced the unforgiving truth—with a Catterall IV diagnosis in hand, Lizzy would have to undergo major surgery if she were ever going to walk again.

Family and friends took over most of my care while Lizzy was admitted to the hospital in February 2001. Post-op, she was placed in a 1-1/2 spica cast with IVs and tubes coming out of nearly every orifice. She turned gray in the recovery room and did not respond to the pain medications as expected during her recovery. Four days post-op, she required an emergency blood transfusion, fully rejected it, and had to be resuscitated. She was admitted to the hospital four additional times that year, including two stays in the critical care unit. The aftereffects of resuscitation included new diagnoses of drop attacks and temporal lobe epilepsy. Watching for seizure activity became a constant task as her doctors struggled to stabilize her brain activity. On the morning of Sept. 11, 2001, while the world was shaken to its core by terrorist activities, Lizzy had a minor stroke. Our caretaking path was shifted into a new realm of medical, nursing, and therapeutic activities, and levels of responsibility increased across the board. I was one of few children in school permitted to have a cell phone at all times and was always on standby for any urgent medical needs.

In the meantime, Alzheimer’s disease was slowly and persistently taking away my grandfather’s ability to perform the simplest tasks. He and I had an incredibly wonderful relationship, one that I will always look back on fondly. The love, understanding, and precious care given to him by family members set the tone, and I quickly learned the importance of compassion, as well as the importance of keeping a sense of humor. He died Christmas morning 2005.

In January 2006, much help arrived in the form of a beautiful golden retriever. Lizzy was matched with a licensed seizure response dog named Mallery, who would forever change our lives for the better. Trained to respond to the needs of medically fragile individuals while alerting others that a problem may exist, this gorgeous canine took the focus from disability to ability and took the stress off our family in terms of monitoring Lizzy’s every move, giving her a new sense of independence. Lizzy was now under the watchful eyes of her new best friend. In the meantime, baffling medical issues continued to surface, which included more visits with specialists, more tests, and additional research. My school projects and reports included copies of my sister’s X-rays, lab results, medical diagnoses, and even her surgical hardware. Record-taking, careful monitoring, and research were a way of life. If and when paramedics were called, my role was well defined: pull the emergency medical records off the kitchen wall; pack the hospital bag with medications, food, drinks, extra clothes, cell phones and chargers, and a deck of cards; move the little dogs into another room; dress the service dog; put on my shoes; and prepare for transport in the back of the ambulance with Lizzy and Mallery while mom followed and met us at the hospital.

In the midst of all this, I will never forget the day I received my acceptance letter to PLNU. My journey of pursuing my educational goals was turning into a reality and my fascination with medicine and genetic research meant that I was going to have to truly focus on my studies. My very beloved 91-year-old grandmother (aka “Nana”) lives down the street from campus, and the decision was made that I would live with her and my aunt during most of the school year, removing the focus from caretaking of my younger sister to studying and completing my education.

Looking back, it’s clear that God continues to put me where He needs me most. That doesn’t always mean that I’m able to focus on what I need or want—it just means that what I think I’m supposed to be doing isn’t always what God has in mind. In the spring of 2013, Nana underwent surgery to remove skin cancer on her nose, followed by more surgeries on her legs. The surgical sites couldn’t be stitched and were quite large, requiring careful, twice-daily wound care to avoid infection. The surgical procedures had been difficult on her mentally, and things were slowly changing.

The first 911 call made on Nana’s behalf took place on April 15, 2013. I had just arrived home from my volunteer shift at Sharp Mary Birch Hospital and had an evening of homework and studying ahead of me. As soon as I walked through the front door, Nana told me that she thought she had suffered a minor heart attack earlier in the evening. She was conscious and breathing, but was in atrial fibrillation (A-fib) and not entirely comfortable with the situation. We spent a long night in the emergency room, and she was eventually admitted to the cardiac unit at Thornton Hospital. She remained in A-fib, but all other test results proved normal, and she was discharged two days after we’d arrived. Her medication regimen had been significantly changed, which meant that extra vigilance was needed in terms of monitoring her dosages and possible side effects. I also needed to make sure Nana wasn’t left alone while I was at school, so neighbors, family, and friends quickly came to my rescue.

On the morning of April 22, long-time friends had agreed to care for Nana while I headed off to school. A paper was due for one class, and I had an 8:30 a.m. exam for which I had long prepared. However, shortly after 8 a.m., the day’s plans would shift unbelievably. Nana suffered another heart attack and needed to be rushed back to the hospital. As I packed her purse with her medications and discharge papers, I had to continue to remind myself that God’s plans come first, and I am His servant. Mom knew that I desperately needed to be on campus that morning and was already on standby to meet the ambulance at the hospital. It took every ounce of strength I had not to get into the ambulance; afraid that I was making the wrong decision and letting my grandmother down, I prayed.

The next few days included a whirlwind of medical tests and sleepless nights. Nana’s medications were continuously altered, but her heart continued to be in A-fib, and no one knew why. On the morning of April 25, a cardioversion was scheduled but not before cardiologists took one more good look at her heart. What they found answered everyone’s questions, and the cardioversion was canceled. Nana had a left atrial appendage clot in her heart, and another month passed before she finally came home. We now make sure that she has 24-hour care, and she is under the hospice umbrella.

Caregivers need a break once in a while, me included. This past summer, I participated in a study abroad hospital internship at the Hospital da Horta in Faial, Azores, Portugal. The course of study included a language immersion program, and I enjoyed every moment of this incredible opportunity. On the first day of my hospital internship, I was assigned to the operating room, where I was on hand for an amputation, a tubal ligation, an insertion of a catheter for esophageal cancer, a double inguinal hernia, and a removal of a cystic lymph node located on the breast. As an added bonus, I quickly discovered that the anesthesiologist assigned to the first surgical procedure was also one of my cousins from Pico, Azores, Portugal!

As the summer progressed, my internship led me through incredible journeys that I’ll always remember—physicians and hospital staff who bent over backwards to make sure every moment of my time in Faial was well spent, an incredible host family, fellow interns who are now forever friends, and memories of a lifetime that led to a summer I’ll never forget. I held my breath and prayed as I watched an emergency C-section with an unresponsive baby—and God heard every single prayer in the room and smiled—the baby survived and is fine! Within the hour I was on hand for the birth of healthy twins. There was never a boring moment, and the opportunities have given me food for thought in regards to my future post-graduation.

I’m now back in San Diego and once again taking care of my beloved grandmother. While the summer included wonderful opportunities and memories, I have to admit that I’m glad to be with my family and friends. To my friends and family in Portugal—I’ll be back soon!