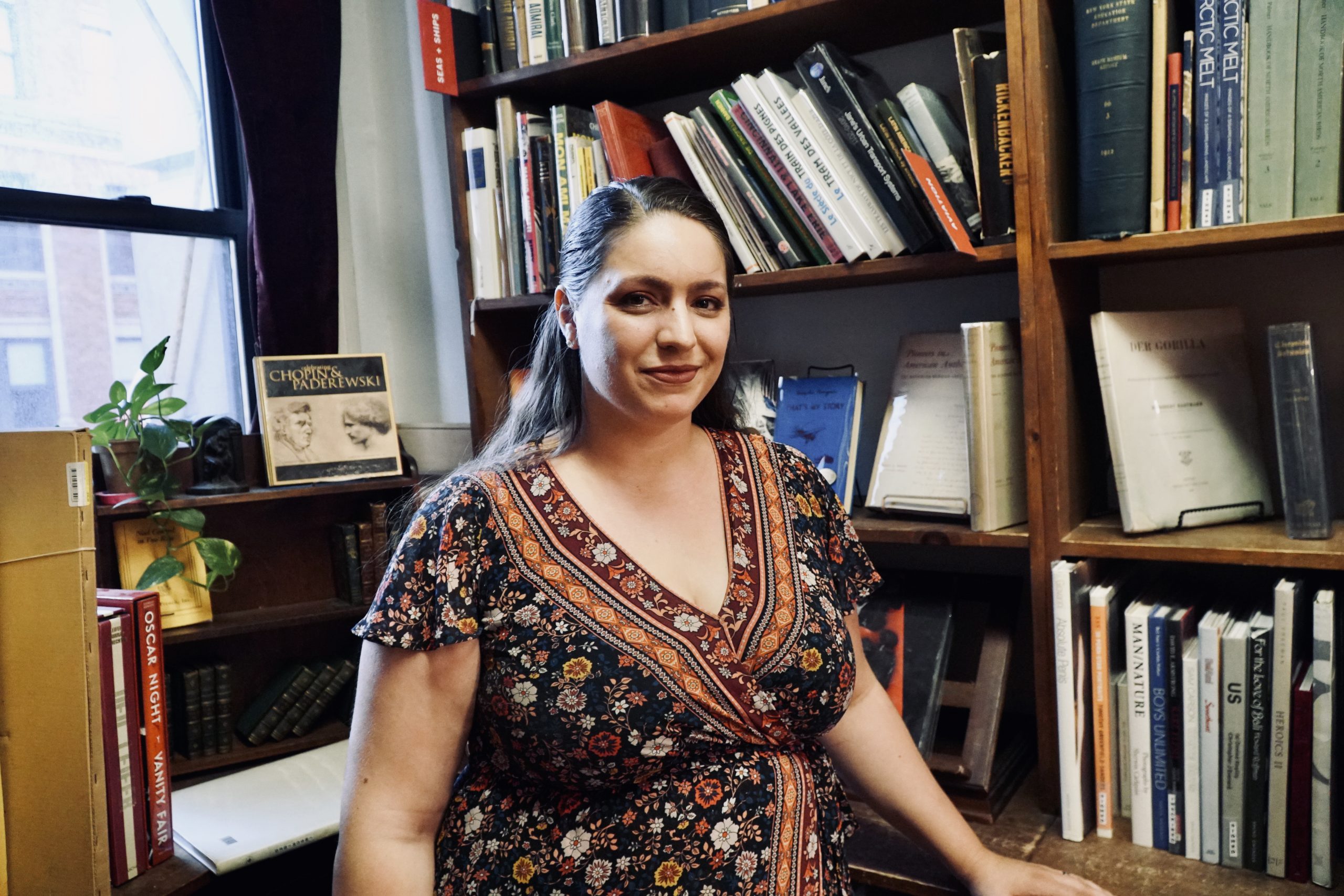 “POW!” reads the helmet sitting beside Bethany Pullen (08). A small hand reaches up, adjusting the hard white plastic to reveal a shy grin and wide brown eyes. The bike helmet sitting next to Pullen also sits on the head of Conrad, her son. Pullen smiles at the camera in her hand.

“What are we doing today?” she asks Conrad, both bundled up against Manhattan’s autumn chill, their brown hair peeking out above scarves and jackets.

“A library!” he shouts with certainty, looking into the camera lens.

“Not a library,” Pullen says, waiting for his 3-year-old mind to wander a bit more.

Bingo. Pullen roams Strand Book Store on Broadway Street, camera in hand, examining the books while her two toddler sons play on the floor. She later confesses she didn’t get very far. The kids wanted to play. This is life in New York City, 11 years after graduating college.

“A lot has happened,” she says. “But life just kind of goes fast.”

Today in Manhattan, she sits inside, away from the camera’s eye. The trees outside are a vivid green, the same color as the cloth in her hair, but the clouds indicate autumn’s coming rain. Perhaps it’s a fitting day for nostalgia, as the memories of her college years at Point Loma Nazarene University bring out a warm, strong laugh that gives life to the word “joy” through its sound alone.

“I originally went in thinking I was going to be pre-med, and then I took chemistry.”

The spirited laugh comes again, Pullen’s eyes crinkling under vibrant pink eyeshadow. She graduated with an international studies degree, and despite her aversion to chemistry, married a cosmologist. Her wedding was followed by a master’s degree in public diplomacy from the University of Southern California and her first pregnancy.

After Conrad’s birth, the family moved to Pittsburgh, where Bethany worked full time as a research project manager in education policy at the University of Pittsburgh, another impressive line on her resume that she never expected would lead to the lens. When her husband received a job offer at New York University, the new physics professor, a pregnant Bethany, and tiny Conrad moved to Manhattan. Childcare costs weren’t ideal, she says, so Pullen decided to stay home with her sons, making her part of the 27 percent of stay-at-home mothers in the U.S.

“I was home full time, which hadn’t been in my plan for myself,” she says. “I have friends who love that, and that’s what they want to do, and I always wanted something else.”

After years of constant movement, she was stationary. Pullen needed an outlet. It was time that life chased her speed for a change.

Almost a year passed. Then, there was the camera.

“I decided to start a YouTube channel,” she says, her laugh bouncing off the walls. “It ended up being one of the best things I’ve done.”

Now, the camera witnesses much of Pullen’s life. Some days, it rests in her apartment, and on another day, it might go on a bookstore trip, capturing Conrad’s bike helmet through the tiny lens. There was a time, Pullen says, when the idea of staying home running a YouTube channel would have seemed strange and unexpected.

“Obviously, my kids are important, and if I need to drop everything for them I will,” she says. “But also, for me, I’m a better mom and a better parent when I’m doing something that’s giving back to myself.”

With over 4,000 followers today, Pullen built her book review business while a full-time mom.

The bookstore trip with Conrad was almost two years ago. Today, she returned to the literary jungle of Strand Book Store, afternoon light pouring over her as she describes her schedule.

Her work hours transpire when she hires a daylong babysitter, filming from her studio, a small set-up in the corner of her master bedroom. Pullen launched with a book review channel called Beautifully Bookish Bethany, and soon branched into an online book club, author interviews, and more. She profits a little from freelance publicity work, and she’s confident she can expand her business in multiple ways. The Pullens still try to have date night once a month. Conrad is just beginning to sound out words, and he seems very interested in reading and writing, Pullen says. It’s easy to guess where he gets it from.

“I feel like I haven’t followed a traditional path for anything, but I like what I’m doing,” she says. “In some ways, I think I’m really similar, but it looks different than I thought it would.”

It’s a funny thing, thinking about what life looked like 11 years ago. She wonders aloud if her PLNU academic advisor, Rosco Williamson, Ph.D., remembers her. He does, and it’s not just her interest in Arabic literature that he recalls. Despite the decade since her time in his classroom, Williamson says, “I totally remember Bethany. She was a very positive person who laughed at my lame jokes.”

Besides her signature laugh, Pullen’s determination also remains. While at the USC Center on Public Diplomacy, she wrote the article “The Achilles Heel of U.S. Public Diplomacy: Race Relations and Police Violence,” showing her passion for social justice issues. The article states, “little is being done…to offer a countervailing narrative to global audiences.”

Related story: Reading to succeed, a necessity which enables us to serve others better.

Now, Pullen can ignite discussion supporting these different narratives. She finds the issues she studied in the literature she reads every day. She wrote, “These are problems that need to be addressed at the national level as well as the local,” and years later, she’s doing that very thing, her passion for social justice seeping into her literary discussions.

While Pullen says much has changed for her since graduation day, in terms of political stances and personal beliefs, her faith remains rooted.

“My relationship with God is so important to me, and we still go to church and want to raise our kids in that,” she says. “I feel a lot more strongly about the importance, as a Christian, of social justice issues and standing for that in places that I think the church has not always done the best job.”

As her audience grows, she recognizes her unique position, saying, “I have a platform where I can lift up those voices.”

Every aspect of Pullen’s fast-paced life led here, a place so unexpected yet so fitting for her spirit. The camera, her unforeseen companion, matches her pace, capturing glimpses of literary reviews, motherhood, and social justice discussion. At 32, Pullen has a master’s degree, two sons, and a growing business. Many people might be ready for life’s movement to slow. Pullen is ready to hit record.

She sits still, holding a cup of warm coffee, no camera lens in sight.

Related story: Jim DeSaegher: A Legacy of Literature and Love

“Service Above Self” — A Favorite Phrase of Alum Stephanie Perez