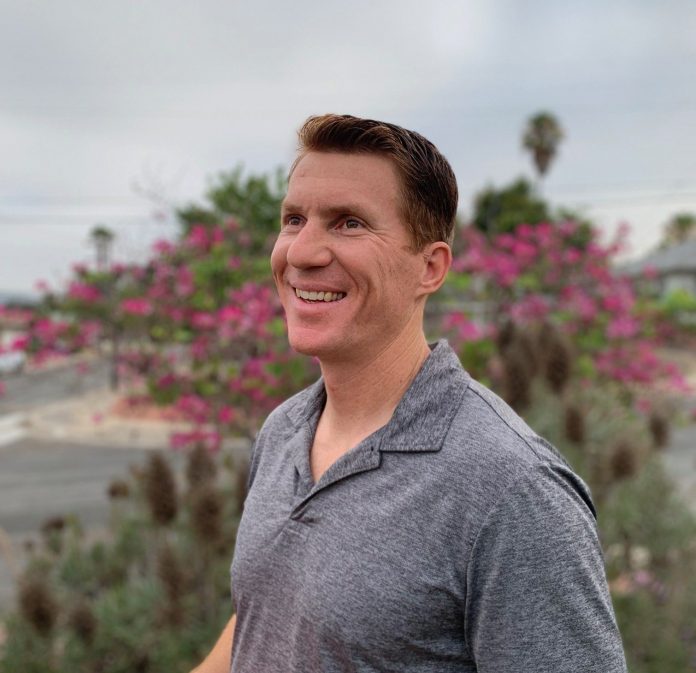 Colin Bowles (00) knew when he started his job as a physical therapist for inmates, he couldn’t imagine their pain — the physical and emotional. Yet, he’d try his best to alleviate it.

“I’m just there to help get their pain better and help them get moving better.”

Colin Bowles (00) has had moments of breakthrough and moments of difficulty serving as a physical therapist for inmates at the Richard J Donovan Correctional Facility in San Diego.

In his time working with this community, Bowles has learned lessons in empathy and advocacy while also applying knowledge he first gained as an undergrad at PLNU.

Growing up in San Diego with parents who worked at PLNU, Bowles’ decision to study at PLNU was a natural one as well as his path to athletic training.

“My parents always instilled in us service: serving the needy, helping those less fortunate than you are, along with the grounding of the Christian faith that supports that,” Bowles said. “I definitely think that helped my passion for a service field like physical therapy. In lots of my classes in my major, a lot of the direction was around service. We worked in the training room helping the athletes. The mission of PLNU was a perfect support for my professional decision.”

However, early on in his studies, he realized the athletic training career path didn’t fit his life goals of forming a family. Instead of athletic training, he’d pursue physical therapy (PT).

“Quickly, l learned through my studies that to make a decent living as an athletic trainer, you need to sign on with a big university or big professional team,” he explained. “If you do that, then it’s not very family conducive… It’s not a 9-5 job. I loved anatomy and those science classes, so I quickly decided during my undergrad I wasn’t going to sit for the licensure exam to be an athletic trainer. I was going to go straight into physical therapy school.”

Right after graduation, he and his wife, who he met at PLNU, uprooted their lives to Virginia, where he completed his master’s and doctorate degrees in PT. There, he grew his skills serving a variety of people with different backgrounds and experiences.

“Being able to serve lots of people with different demographics and some of the service work we got to do with amputees was pretty cool,” he said.

After completing his post-graduate studies, he and his wife returned to San Diego, and he pivoted back to athletic training for a short term.

“I got a job at a sports medicine clinic that I loved,” said Bowles. “[There were] college and high school professional athletes, loud music, and a great environment. Everyone was eager to get better. I was there for almost two years. But for several reasons [and] starting our family, we felt like I needed to move on.”

This shift toward setting down roots in San Diego led him to a job as an outpatient therapist for Vibra hospital at the time. In addition to working with local clients, Vibra was where Bowles first started working with the inmate population.

“The hospital actually had a contract with Donovan State Prison down in Otay Mesa to service long-term acute care hospital needs,” said Bowles. “They signed on for [an outpatient contract] because I think they only had one or two therapists down at the prison at the time, and they couldn’t do it in house, so they’d send them to us. It got to the point where we were seeing them every day.”

After working in Vibra’s outpatient care for 13 years, Bowles received abrupt news that the hospital was to be bought out and his outpatient department would be shut down.

“I made the call to the prison to talk to the medical director and I told him, ‘We can’t see your patients after two weeks.’ He said, ‘If you ever need a job I’d love to have you down here.’ And that’s how I got my job,” said Bowles.

He made the decision to shift full time to working with inmates and hasn’t turned back.

“I tell people all the time: It’s almost more rewarding working down there at the prison,” said Bowles. “I had lots of great relationships with patients, we call it, in the ‘on-the-streets clinic’ (on the streets as opposed to in the walls of a prison). Working on the streets and with the general community, I developed great relationships with patients and doctors, but [even more so] being able to work with prisoners who are living the lowest of lows and the medical care isn’t necessarily the greatest sometimes for them.”

However, seeing the stress and pain his patients endure within confinement while also trying to help them get the best medical care possible hasn’t been easy.

“There have been several times when I’ve had a patient come in and you can tell, this guy is a big, muscular, mean-looking dude, and they start telling their subjective history about their injury and what’s going on,” he said. “You keep asking questions and you finally get to the conclusion that this guy has a pinched nerve in his back and some significant atrophy in some major muscle groups. And mind you, what’s in the back of these guys’ heads is being able to stay physically healthy because they have to protect themselves and be on alert all the time.”

Bowles witnesses how the stress of prison life negatively impact’s his patient’s bodies. Bowles explained he often has to follow up with doctors to explain the severity of his patients’ pain and their need to maintain optimal physical well-being.

“It’s been very rewarding being able to be more involved in advocating for patient care,” he said. “The patients are oftentimes looked over and neglected, so being able to advocate for patients in those times has been rewarding.”

Bowles shared the story of one patient who’s left a lasting impact on him and conveyed the nuances of inmates’ lived experiences.

This particular patient who’s sentenced to a life term without the possibility of parole was written up several times while navigating the social and politics of prison in the general population, Bowles explained. Moving to the special needs yard, however, he was able to avoid the gang activities and has continued to serve a clean term for over the last 15 years. But following the COVID-19 pandemic, the inmate population was affected particularly hard.”

This patient had three family members who passed away over a two-year time frame.

Bowles continued, “Because of COVID-19, there was limited movement in the yard; they were pretty much locked in their cells 23 hours a day. Cell phones are illegal. He broke down and got a cell phone because he hadn’t been able to communicate with his family in a month and a half. He got caught with it, and because of that, he got another three-and-a-half years before he can go to the board and get released.”

Stories like these are just one of many Bowles interacts with on a daily basis.

“I tell them all the time, I can’t even imagine,” he said.

However, he said what makes it come full circle is when he hears how his work is helping them overcome physical and emotional pain.

“The cool thing to hear is when they say, ‘Coming over to physical therapy with you here, Colin, is like a light in our world because we can actually communicate with someone we don’t feel threatened by and can have a decent conversation with,’” he said. “They always say, ‘It’s nice to come in here and feel like we can be normal when we come to therapy.’ It’s not only physical therapy that I’m doing on a daily basis. I feel I’m touching on everything: mental, emotional, spiritual.”