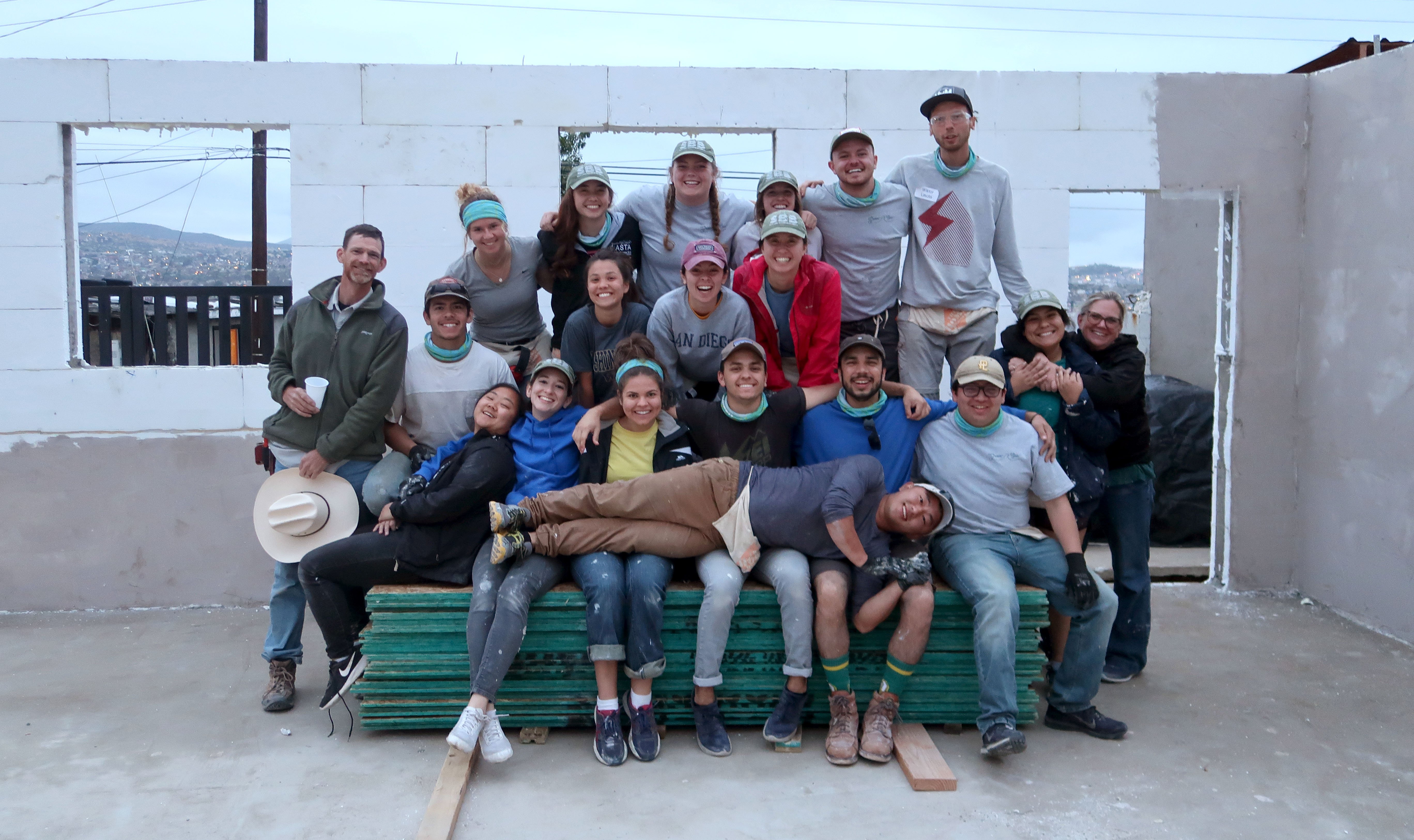 Early in the morning on Tuesday, March 5th, I left a hotel with a small group of other PLNU students. We were then shuttled to the 2019 Spring Break Build construction site at Primero Iglesia del Nazareno in Tecate, Mexico.

Bleary-eyed, but surprisingly cheerful, the team began their second day with a worship service and student-led devotional from Colossians 3:12-17. Then, they ate breakfast and joined the other members of faculty and staff who had already been working.

Though Spring Break Build, a partnership between PLNU and Lazarian World Homes, has been happening for nine years, this 2019 project posed a particular challenge. The building was structurally larger than anything Lazarian World Homes had attempted before: a 50 x 48 foot multi-purpose room on the property of Primero Iglesia del Nazareno. According to Chad Coil, the president of Lazarian World Homes, because of the sheer size of the room, this project was to be their most expensive yet, costing around $85,000.

How in the world did PLNU convince nearly 40 college students to pay money to spend their spring break doing manual labor in Mexico?

The early planning stages of the building took place in October 2018. The plans for the roof were certified and deemed safe by U.S. building code. The roof for this building required 25 A-frame roof trusses, which were about 750 pounds each. To complete these massive trusses, the team used 225 sheets of OSB plywood (which is two times stronger than regular plywood) and 82,000 screws. Between the foundation and the wall, 80 cubic yards of concrete were used.

The team had left PLNU on Sunday morning to attend church at Iglesia del Nazareno La Mesa in Tijuana, Mexico, and receive instructions and safety information. By the time, I arrived at the build site on Tuesday, I was greeted with a flurry of activity; teams were bending and cutting rebar, building the remaining height of the foam block walls, and creating trusses for the roof. I was immediately tasked with fitting foam blocks together to make the walls. This is Lazarian World Homes’ building process, much like an adult game of Legos. The “legos,” in this case, are different sized polystyrene foam blocks, which interlock to make the walls of the building. These hollow foam blocks are reinforced with rebar and concrete, allowing them to withstand earthquakes, storms, and other natural disasters.

After working for an hour, we breaked for lunch. After lunch, we finished the walls and poured concrete in. This process was as eventful as it was messy. Dinner followed the pouring of concrete and at about 7 p.m., we returned to the hotel.

However, instead of immediately going back to their respective rooms and going to sleep, I was amazed that a large majority of the students were planning to go and get churros at a nearby cafe. Though I was very tired, I joined the group, not wanting to be left out of the fun. I was so happy that the group was choosing to hang out after being with each other for nearly 11 hours.

The steady din of chatter and laughter mingled with the smell of freshly-made churros. We didn’t get back to the hotel until nearly 10 p.m., but no one complained or seemed to dread the work for the next day.

When we arrived at the cafe, the two workers were overwhelmed with nearly 40 orders at the same time, but the students didn’t mind. The steady din of chatter and laughter mingled with the smell of freshly-made churros. We didn’t get back to the hotel until nearly 10 p.m., but no one complained or seemed to dread the work for the next day.

The next morning, we woke up early, drove to the construction site, and began work again.

How in the world did PLNU convince nearly 40 college students to pay money to spend their spring break doing manual labor in Mexico?

Perhaps it is the lure of celebrity. President Bob Brower and his wife, Linda, join the trip each year. Dr. Brower is in charge of the building of the roofing trusses. Dr. Mary Paul, the vice president of Spiritual Development, also joined the group, along with Dr. Bill Wood, history professor, and Dr. Milton Karahadian, the director of Nicholson Commons. Yet, these veritable giants on PLNU’s campus cannot be the only draw for students. Why, then, couldn’t a curious student just take a history class with Dr. Wood?

Perhaps it is the chance to meet other students. This seemed to ring more true. When asked what her favorite part of Spring Break Build was, Mary Paul said that the beautiful thing about Spring Break Build is that it gives you the chance to grow in relationships with people you wouldn’t normally meet. Together, seniors and freshman tackle challenge of sanding the foam blocks. Students of different majors, ages, and life experiences gather together to create. Senior Chad McLain noted the unity of the group. Even in the unique mix of people, we are all working on the same project, eating the same food at the same table: “It’s a piece of God’s heart.”

Moreover, the transnational aspect of Spring Break Build allows for students from the United States to meet members of the Church in Mexico. During last year’s Spring Break Build, John, a PLNU student, and Ramses, a student at the Nazarene Seminary in Tecate, became friends. Though the language barrier was formidable, it did not prove to be insurmountable. John will often pick up Ramses from Tecate and bring him to PLNU. On the last day of Spring Break Build 2019, the duo celebrated their one year anniversary of friendship.

Even in the unique mix of people, we are all working on the same project, eating the same food at the same table: “It’s a piece of God’s heart.”

I think the most profound part about Spring Break Build for me is the idea of building the Church, both metaphorically and physically. The workers, PLNU community members, and church members in Mexico are the Body of Christ, the Church. It was so beautiful to watch the Church as the Body of Christ build a physical church building for the Church to worship in.

On one of the last days at Spring Break Build, Chad Coil shared the devotional for the day, and reminded the students: “If it’s just a building, it’s worthless.” There is an inherently spiritual dimension to our work when the body of believers comes together.

Breann Wong is a senior Literature-English Education major at PLNU. Her work has been published in PLNU’s creative arts journal, The Driftwood. She serves as a coordinator for Ministry with Mexico and is passionate about Spring Break Build.