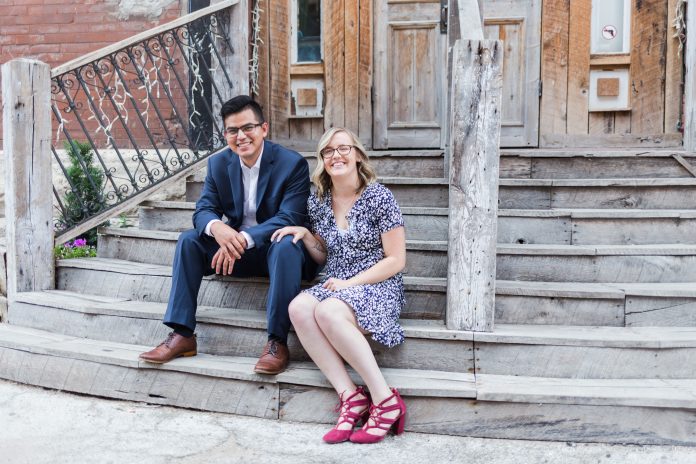 As a pastor, Kevin Portillo’s (14) passion for theology, the church, and ministry aren’t surprising. But they weren’t always a part of his life. Today, Portillo is an associate pastor of discipleship at Faith Community Church of the Nazarene in Lodi, California. However, he didn’t grow up in a Christian environment.

“My parents immigrated to the U.S. from Central America in the ‘80s,” he said. “They had been baptized Catholic, but they raised my siblings and I without a religious environment.”

In 6th grade, Portillo began attending Las Flores Church of the Nazarene in Carlsbad, California, with a friend. His sophomore year, Portillo became a Christian and stayed involved at Las Flores where he met George Williamson, the church music director and director of worship arts at PLNU. When Portillo found out there was a Nazarene university in nearby San Diego, he was excited.

A few years later, he found his calling at PLNU.

“My classes with Michael Lodahl and Rob Thompson got me interested in disciplines of mind and spirit as well as church history,” Portillo said. “I decided to pursue these things, and they encouraged me through their mentorship and guidance. I declared a philosophy and theology major and later added a second major in Christian ministry.”

Though Portillo joked that his double major had him spending all his time in Smee Hall (the home of the School of Theology and Christian Ministry at PLNU), the department’s emphasis on doing ministry while learning actually had him out serving the community regularly. In addition to serving on the worship ministries team as a bass player in chapel, Portillo led worship at a church in Clairemont during his senior year. He also helped with youth ministry at Las Flores. In the summer, he was part of Point Loma’s Summer Ministry Team (SMT) with roles including bass player, sound tech, group leader, and chaplain.

“SMT was one of the most formative things I did where I made the deepest friendships,” he said. “We did ministry across the Southwest region of the Church of the Nazarene, hearing stories from teens from various local churches. Their stories were so different but also so similar in terms of the challenges they were facing. It was a way to bring what I was learning and being formed to do in the School of Theology and Christian Ministry and contextualize it in a ministry like that.”

The chance to do ministry while learning ministry was one of the things that made the biggest difference in Portillo’s life. The other was mentorship. In addition to Drs. Lodahl and Thompson, he recalled Kara Lyons Pardue, Ph.D., Ron Benefiel, Ph.D., Robert Smith, D.Min., and Steve Rodeheaver, M.Div., as being particularly influential.

“They shaped and formed me,” he said. “Not only through studies and classes, but they also shaped my character. One of the coolest parts of Point Loma is that the professors are so relatable. They allow themselves to be known by you. They talk about what they do, their families, their character, their heart for the church, their academic studies … That’s how I found my call to ministry: just witnessing them and seeing how their character is so remarkable and seeing their calling to love Christ and the world changed my life.”

Others saw that calling in Portillo as well. His brother and sister are both participating in church now, his dad is supportive, and his mom is even on the board of a Nazarene church in Oceanside, California.

“My family saw how my life was so involved in the local church and God used that,” he said. “My parents had been baptized Catholic, but their hearts were rekindled.”

After Portillo graduated from PLNU, he went on to earn his Master of Divinity from Nazarene Theological Seminary (NTS) in 2018. That August, he accepted his current position as associate pastor of discipleship. He and his wife, Dayna, now live in Lodi, California. On April 30, 2021, Portillo will be ordained as an Elder in the Church of the Nazarene.

“Ordination is the culmination of my calling,” he said.

For Portillo, that culmination isn’t an endpoint, however. He’s considering doctoral studies to prepare him for whatever God has planned for him next.

“I feel a lifetime call to ministry whether that is as a pastor or a professor,” he said. “I don’t know what God has in store for me, but I feel prepared. I would love to be a pastor at a church, but I could also see myself doing that and university work or even full-time university work. I am just excited that I get to invest the rest of my life to the glory of God.”