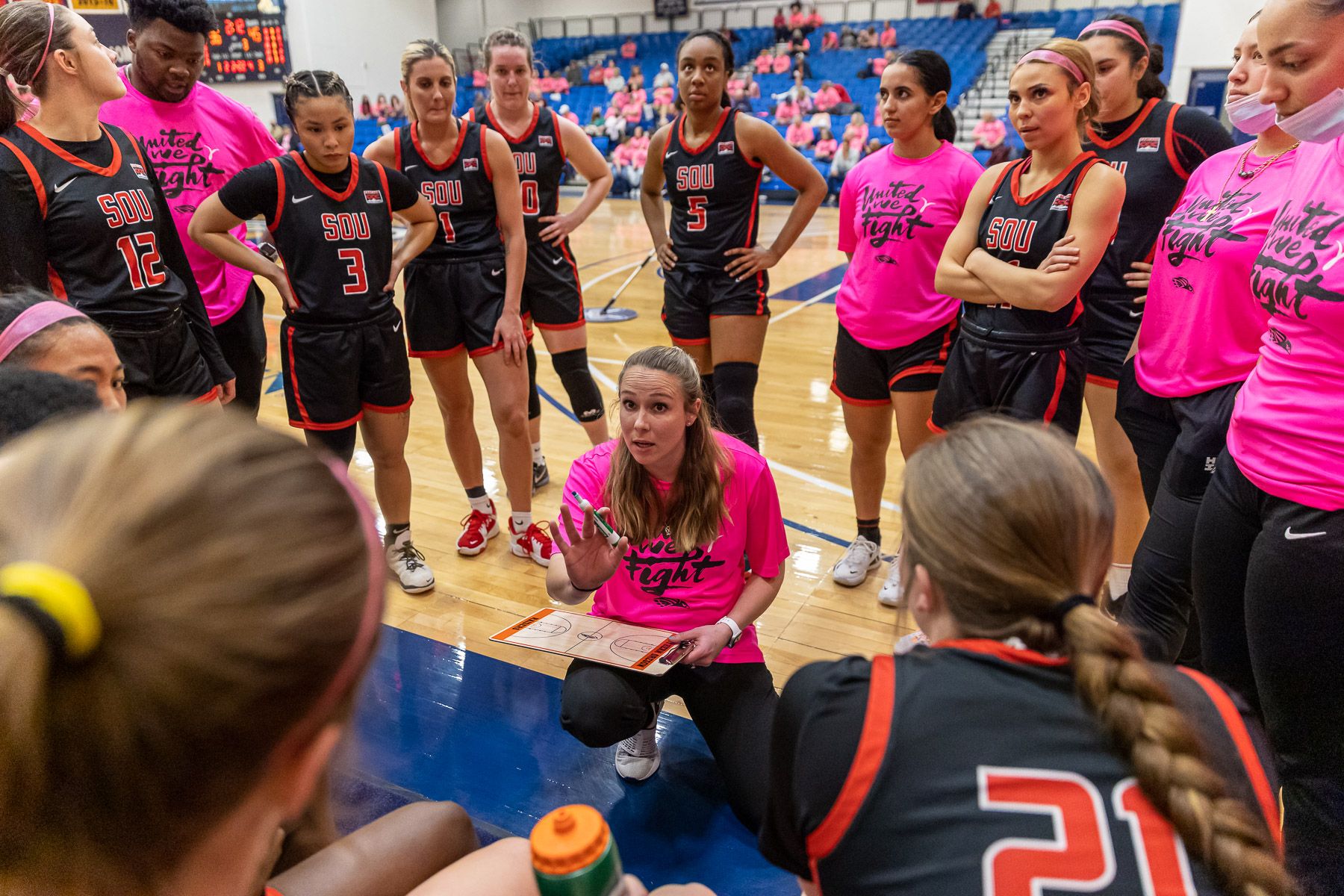 When Carlotta Kloppenburg-Pruitt (14) interviewed for her first head coaching position at Southern Oregon University, the idea of running a full practice was overwhelming.

“Everyone’s staring at you, like, ‘What do we do?’” she said, reenacting a deer in headlights.

“All of the different coaches I played for and who I worked for, it shaped my philosophy,” Carlotta said. “I had to just be confident. I had to come in there and, even if I probably didn’t know what I was talking about, I had to kind of fake it because [the players] feed off of that … I just came in passionate.”

And it worked. In May 2021, Carlotta was hired as the women’s basketball program’s newest head coach at just 29 years old.

“It felt like this is where I should be,” she said of the NAIA DII program. The players welcomed her and her defense-first coaching style with open arms. Southern Oregon wanted to win and they wanted a winning coach.

“It reminds me a lot of Point Loma,” Carlotta continued, adding that out of high school, she needed to play two years at a junior college before heading to DII herself. PLNU was her dream landing spot. “You have to be self-motivated, right? You have to want to get better. And they do that and having a coach that’s going to push them to do that. They’re responsive to it. There’s no entitlement. There’s none of that stuff that you see at other levels.”

The players truly bought in and trusted the process, especially on the defensive end. In her first season for the Raiders, her team went 29-6 and claimed the Cascade Collegiate Conference Championship. They ranked eighth in the nation in points allowed and made it to the second round of the NAIA tournament. Carlotta won Coach of the Year. Not too bad for a rookie.

But there’s no coincidence Carlotta is a basketball coach and a good one too. It’s in her blood. Her grandfather, Bob Kloppenburg, coached 18 years in the NBA and is known as the Godfather of the SOS Pressure Defense. Her dad, Gary Kloppenburg, is currently an assistant coach for the WNBA’s Indiana Fever, and he coached the Seattle Storm to the 2020 WNBA Championship. He has an overall decorated 22-year pro coaching career. Her mom coached her in youth basketball, and even her sister is a leader in the sports-fitness education industry. It’s a family affair.

“Once I started interning [for my dad] in the WNBA, the process of how you prepare for games and how these players were, it was so fun,” Carlotta said. Starting in college, she’d travel in the summers to witness first-hand what it was like to be in the pros. “It’s infectious. The competitiveness, it was so much fun to be around.”

“Once I started interning [for my dad] in the WNBA, the process of how you prepare for games and how these players were, it was so fun. It’s infectious. The competitiveness, it was so much fun to be around.”

At SOU, about once a month, her dad, Gary, would serve as a volunteer assistant coach and sit next to her on the bench. Having his invaluable experience there to support with in-game management, substitutions, and even when to call a timeout — all the little things that showed her hand as a first-time head coach, she said. Even when Gary wasn’t physically on the bench with her, his advice still lingered in her ear during game days.

“Just having that voice, because he’s been doing it forever, was huge for me,” she said. “Then when he wasn’t there, I was listening to him in the back of my head. ‘Okay, Coach would probably say to do this.’”

As for her grandpa? “He would watch every game and send novels of notes,” she laughs; it was all defense. “No offensive notes in there at all.”

Carlotta’s family taught her that, as a coach, relationship building is key — sometimes even more important than the X’s and O’s. She prioritized team bonding, team meetings, and getting to know her players one on one. Vulnerability, she explained, is a two-way street, and that opened the door to trust.

“You can’t try to coach them if you don’t have a relationship with them,” she advised. “They need love and they need confidence and support, but they also need someone to tell them what’s real.”

“You can’t try to coach them if you don’t have a relationship with them. They need love and they need confidence and support, but they also need someone to tell them what’s real.”

What’s real is being a leader of young women as a woman. Something she took to heart. Carlotta knew there was power in her position and she said that it was crucial to show her team that women could prevail in this typically male-dominated industry.

Carlotta coached the entire 2021-22 season pregnant, and she made it a point to be a role model to her players not only as a professional but as a wife and soon-to-be mom. From the difficult conversations to the celebrations to ensuring they’re fed and homework completed, her first season as Coach prepped her for her first time as Mom.

“I’m thinking, oh my gosh, in 18 years, she’s going to be one of them. She’s going to be in college,” she adds in disbelief thinking about her newborn. “Those relationships you build — how you get them to trust you, and then how you trust them — have really prepared me for those steps that I’m going to be taking with my daughter. It’s going to be very, very similar in a lot of ways.”

Come next basketball season, Karstyn Lou (born on April 22, 2022) will be sitting courtside with bedazzled earmuffs, watching her mommy live out her dream as a head coach. Karstyn may not know it yet, but coaching is in her DNA, too. Basketball is the family’s sport. As for her mom, Carlotta, the competitiveness has already kicked in and the idea of parent-coach was an unnerving one. “I don’t know if I want to coach her,” she joked. “I hope she just likes to play piano or something.”