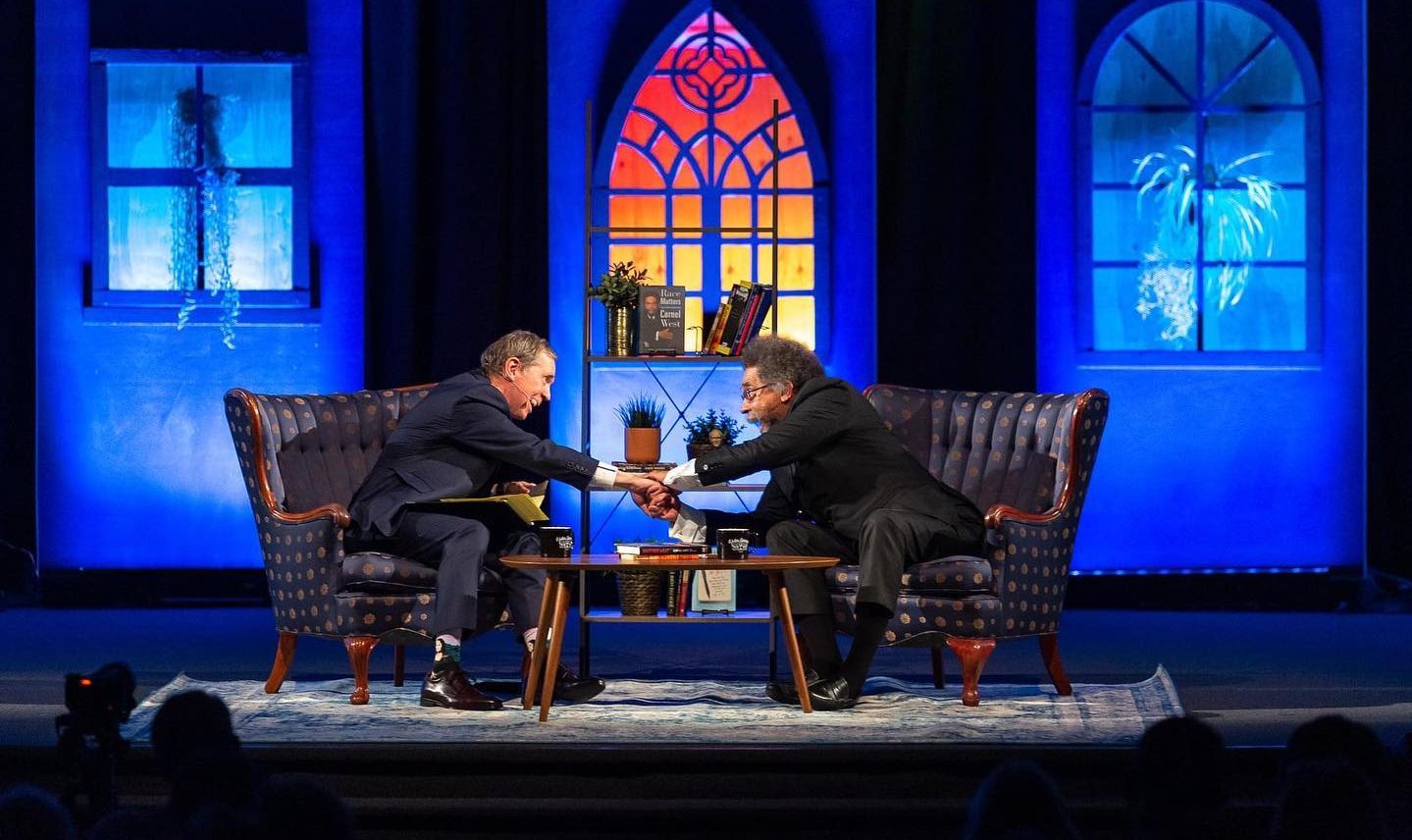 The first day of the symposium was dedicated to Nadia Bolz-Weber, an ordained Lutheran pastor, founder of House for All Sinners & Saints Church in Denver, Colorado, and the author of three New York Times bestselling memoirs. Bolz-Weber’s first event was a short, intimate conversation in the early afternoon, held in PLNU’s Fermanian Conference Room. For audience members, it was a perfect opportunity to hear more about Bolz-Weber’s podcast “The Confessional,” as well as witness a true sense of her intelligence and humor. She had great one-liners about her relationship with Jesus, much like from her book Pastrix: The Cranky, Beautiful Faith of a Sinner Saint, saying: “Forgiveness is a big deal to Jesus, and like that guy in high school with a garage band, he talks about it, like, all the time.” The audience laughed and sighed as Bolz-Weber talked about her interviews with controversial people she’s interviewed herself.

A few hours later, Nelson and Bolz-Weber took to the stage of Brown Chapel to talk about her books, life journey, and religious understandings. Prior to coming out, Nelson and Bolz-Weber chatted backstage while she signed pre-ordered books, and PLNU alum Katie Leigh played guitar and sang for the crowd filtering into their seats. With the sounds of background music and chatting on the other side of the curtain, Nelson and Bolz-Weber bonded over their mutual distaste for common interview questions and the bland answers such questions procure.

Once onstage, Nelson interviewed Bolz-Weber with finesse and humor that matched her personality perfectly. From deep discussions about recovering from alcoholism to cracking jokes about her tendencies to curse at the objects she stubs her toe on, the result was invaluable life advice, heartfelt stories, and meaningful responses to Dean Nelson’s questions.

At the end of the first night of the Writer’s Symposium by the Sea, everyone left the auditorium feeling informed and inspired by this dynamic and down-to-earth woman who shared a vulnerable part of herself.

The next day held a similar schedule but with a vastly different interviewee, David Brooks. Brooks is the author of the No. 1 NYT bestseller, The Second Mountain: The Quest for a Moral Life, an op-ed columnist for the New York Times, and a commentator on The PBS Newshour, NPR’s All Things Considered, and NBC’s Meet the Press.

In the same fashion as the day before, a small conversation was held in the Fermanian Conference Room, where Brooks fielded PLNU students’ questions on various topics from the food industry to the stock market. Once the hour-long conversation was up, the crowd dispersed until Nelson’s interview with Brooks in Brown Chapel. Prefaced by a classical piano performance by Brenda Martin, adjunct instructor of music at PLNU, Nelson and Brooks talked and laughed backstage while preparing the content they wanted to cover during the interview.

After mic checks and final adjustments, Brooks was invited onstage by Nelson with thunderous applause. The conversation between Nelson and Brooks was one of high intellect that presented vast knowledge of being in the world and experiencing the realities of humanity.

Nelson asked prodding and relevant questions that procured meaningful responses from Brooks, who spoke in a calm and collected manner while constantly elaborating and expanding on his answers.

The interview concluded with a roar from the crowd as the pair left the stage and Brooks signed books for fans and received many thanks for sharing his knowledge both on the page and in person.

The final day of the Writers Symposium by the Sea concluded with a powerful interview with Cornel West. West is a Dietrich Bonhoeffer Chair at Union Theological Seminary in New York City and author of 20 books, including Race Matters, Democracy Matters, and Black Prophetic Fire. It’s no wonder it took three years to book Dr. West for this year’s Writer’s Symposium.

Before the main event in Brown Chapel, West shared a private conversation with students of PLNU’s Humanities Honors Program and Black Student Union in the small Eclipse Chapel right next door. West spoke about his relationship with Christ and how it shaped him into the teacher and leader he is today. The floor was then opened to students to ask questions of West, which he then responded to in depth. One student questioned West about how people can spread the gospel and educational discoveries when returning to their home country from America without causing traditions and cultural practices to be diminished. West responded enthusiastically and noted that embracing one’s initial culture while in America is an essential part of learning how to inform and educate your community from another place. West went on to field more questions pertaining to race and class, his responses always centering on the love Christ has for us and how we should work to extend that love to others.

This small event was a formative experience for students to share an intimate space with such a dedicated man of God and experience a once-in-a-lifetime opportunity to share a deep and direct conversation with the world-renowned Dr. West.

While the students from the Humanities Honors Program and Black Student Union made their way to their seats in Brown Chapel, West and Nelson conversed briefly backstage while a jazz band kept the buzzing crowd entertained.

After the band members took their bows, and once the applause of the sold out auditorium finally ceded, Nelson welcomed West onstage to a riveting conversion that bounced from topics focusing on race, class, politics, and other current issues. West embraced his Christian viewpoint toward life and liberty throughout his responses, and Nelson prodded him to share his viewpoints on controversial topics such as Marxism, critical race theory, and current American divisiveness. But being so personable and understanding, they approached each topic with egalitarianism and Christ-centered open-mindedness. The interview ended with West and Nelson singing the hymn “I’ll Fly Away” together, to which the crowd joined in. “Like a bird from prison bars has flown, I’ll fly away,” they sang, epitomizing West’s main theme of embracing and exuding love, not only of Christ but to and from those who surround us.

The 27th annual Writer’s Symposium by the Sea was a big success. Each featured writer was outstanding in their own unique way, and the interviews were highlighted by Nelson’s intuitive line of questioning that drew out heartfelt and earnest responses.

Become a Friend of the Writer’s Symposium!

To maintain the symposium’s high-quality programming, the Symposium needs your help to meet its yearly goal of $50,000 in donations. Please consider partnering with Writer’s Symposium by the Sea by giving a tax-deductible donation. Every gift counts — no matter the size! Friends may give a one-time donation or an ongoing monthly gift.

Thank you for your support.