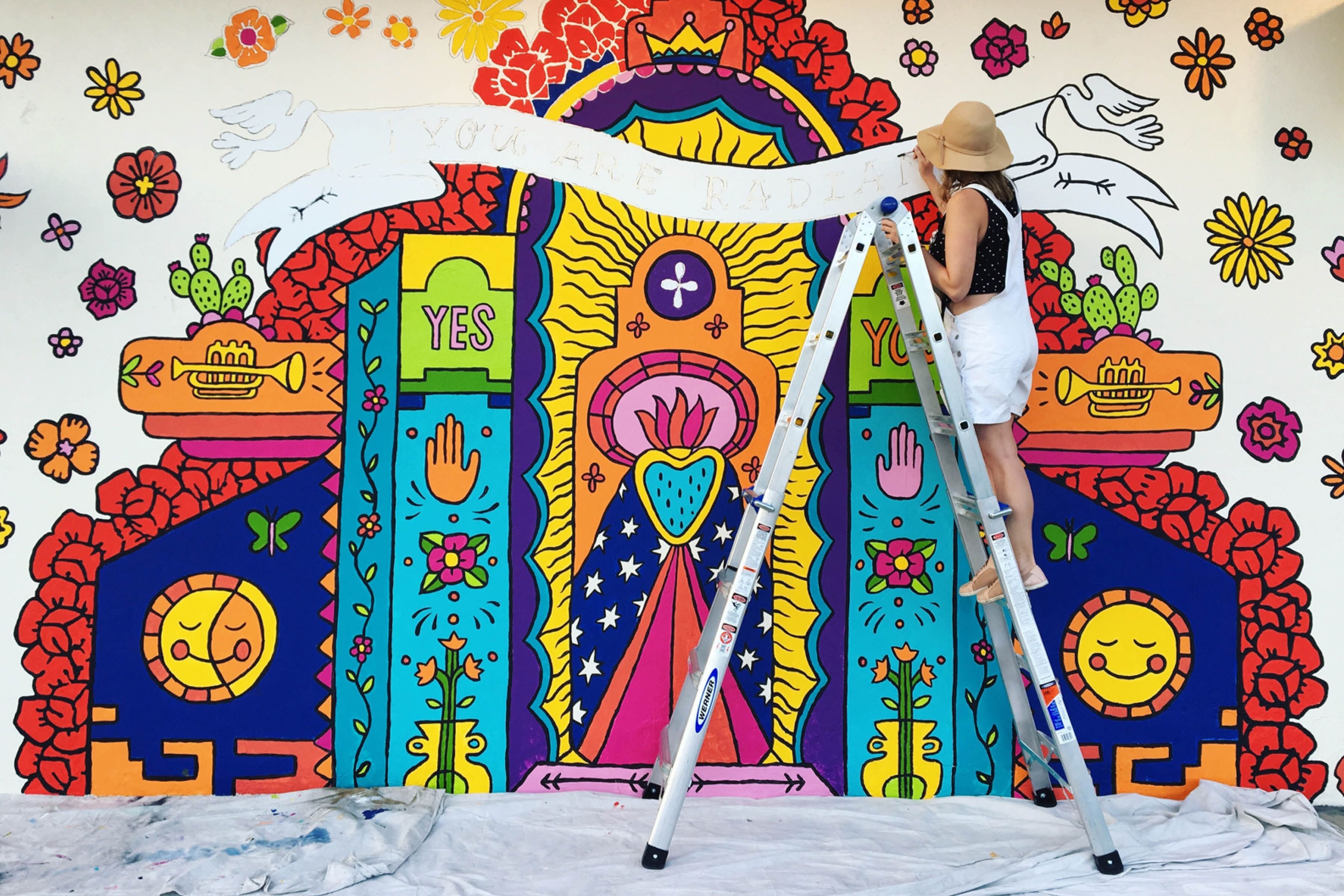 Channin Fulton (14) had always loved creating and making, which is why she majored in graphic design at PLNU. “I knew I wanted to go into some sort of art program,” Fulton shared. “I picked graphic design because I thought that it would be something that would sustain my art desire, though I quickly learned that it’s a different animal than art in some ways.”

What she loved about design was that it required solving problems — thinking visually to reach a solution for the purpose of serving an organization or individual. Following this passion in art and design, after she graduated she landed a job at San Diego-based agency MiresBall. There she continued to immerse herself in the world of design, growing tremendously as both an artist and designer.

“I felt very accepted into the work-family at MiresBall. It was the type of place that regarded everyone who worked there as a member of the family. I was mentored by a few women. I refer to these women as my ‘design moms’ and they took me under their arms,” Fulton shared.

Fulton enjoyed her time there and grew professionally but unfortunately — as is common in the creative industry — she was laid off along with others after two years. Naturally, she was disappointed. But little did she know that the loss of her job would allow her to engage in a new and exciting path. And the spark for beginning this new path occurred when she went on a trip with PLNU associate professor, Courtney Mayer, M.F.A., to a ‘type and printing’ museum in Wisconsin.

“I just remember going on that trip with Courtney Mayer after I got laid off, and I remember sitting with her in this restaurant basement and having this heart to heart talk and receiving wisdom and encouragement,” Fulton said. “She told me that I should just keep making and doing and pursuing my passion.”

Fulton took the advice and began creating and designing, which she then featured on Instagram. This ultimately led to her finding jobs here and there with different small companies until finally landing a mural and branding gig with a San Diego-based business called Artelexia. She was able to put her artistic talents to work in the form of creating multiple murals as well as her design thinking by developing a branding strategy for Artelexia. And unlike working at an agency, she was able to collaborate directly with the business owner, which she loved. Shortly after this, she set up her business and committed to working for herself as an illustrator, which she has been doing for the last three years.

She has enjoyed working on several art and design projects, where she has been able to serve various clients through her creative and strategic talents. However, there are two projects that have been especially impactful for her.

The first occurred when she was contacted by Target to design an interior mural for one of the company’s store locations in North Park. Target wanted the mural to represent the neighborhood of North Park — and having seen Fulton’s impressive mural work for other local companies —reached out to her directly.

Target wanted the mural to represent the neighborhood of North Park — and having seen Fulton’s impressive mural work for other local companies —reached out to her directly.

“We worked for about a year and it was a really great experience,” Fulton explained. “They gave me a lot of creative freedom but enough constraint as well. I like the freedom that art brings but also the constraint that design demands. I got to do this project in this neighborhood that I love so much and grew up in. It allowed me to celebrate my community and communicate joy with my work.”

The other recent project that has really meant a lot to Fulton has been a downtown mural she helped design for local non-profit, Humble Design. The project was created through Good Measure, a volunteer-based nomadic organization that helps non-profits all over the country by offering a complete rebrand or brand refresh within only 72 hours. Once Good Measure selects a city and a design agency within that city to host the project (in San Diego’s case it was Basic Agency), they collaborate to source a non-profit candidate and organize a “72-hour design sprint” to knock out a full brand that includes strategy, copywriting, video content, web design and development, and, in this case, a mural. Good Measure selected Humble Design as their San Diego non-profit recipient. Humble Design, according to their mission, “serves individuals, families, and veterans emerging from homelessness by transforming their empty house into a warm, welcoming and uplifting home with donated furniture and household goods.”

“Rodrigo, my friend and colleague, brought me in since he thought it would be cool to bring in a design mural component in addition to the branding components that they were creating. We ended up collaborating with another mural artist from Houston named AJ Rose,” Fulton said. “And this was a completely volunteer-based thing, but it was so exhilarating to be a part of it. The mural we created reads ‘So Good,’ which serves as a reminder to the community that goodness exists all around us and we all have opportunities every day to do good despite our circumstances. Rodrigo had this cool idea to highlight the letters ‘S’ and ‘D’ in the mural, pushing the concept that “good” sits within “S(an) D(iego).”

“I consider my work as an artist as more of a vocation than just a job. How am I serving my community with my gifts and hard work? And how do I design for good? I make sure to work with clients that are purpose-driven, ones who are doing good for our world,” Fulton said. “As a designer and artist, my goal is to bring about a sense of positivity; my goal is to bring joy and color to the world.”

It’s been this commitment to serving others through her art and design that has kept her motivated, even a few years ago when she was laid off and unsure what path to take moving forward. She heeded Mayer’s advice to just keep making and creating — she followed her passion and desire to serve — and doors opened up. That’s why, when asked what advice would she offer to young artists, designers, or creatives, she points to the need to be confident with their gifts, to not be afraid to take risks, and to follow their intuition.

“I think creative people have this sense of intuition often, and we should utilize that. At least for me, that has paid off,” Fulton said. “But with that said, work really hard! I remember PLNU professor Dave Adey told me right before I graduated that luck favors the prepared. I feel I got lucky, but I was also prepared and worked hard. Just keep making and designing. Give yourself that space to grow. And have fun with it!”

You can see more of Fulton’s art and design work by visiting her website.

Related Article: Artist Wes Sam-Bruce is building his reputation in the art community by building forts.