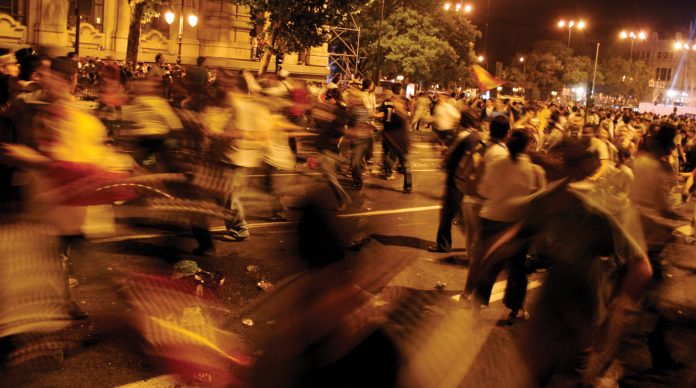 The news coming out of Charlottesville, Va., was disturbing on many levels, but one piece of news made my body tense and my head spin. Reports were coming in that a car had plowed into a group of people who were marching in protest of the neo-Nazi and KKK event organized to assert a cultural supremacy in a nation blessed with vast diversity.

As video footage of the car ramming into the crowd made its way online, I watched with horror and grief. My mind quickly went back to July 19, 2017, the day my family and I had our own encounter with a raging mass of metal knocking us in the air and on the ground as we casually stood at the counter ordering our lunch at a local burger place.

As my wife was pushed to the ground, missing a close blow to the head by millimeters, my 14-year-old daughter and I were lifted off the ground — my daughter landing on the hood of the car while I was pushed up on the counter that, fortunately, also moved back several feet. Miraculously, my daughter only suffered a broken toe and my wife rib contusions with lingering nerve damage to parts of her leg. I was not so fortunate. My left tibia plateau was smashed, requiring surgery to insert eight screws to put the pieces back together. I spent six nights in the hospital, almost three months of not walking, and a year’s worth of recovery and therapy. My fall semester classes at PLNU were taught from a wheelchair as I worked half time.

As the accident was happening and my mind was hyper-focused, I had time to think of only one thought: “Today is the day you and your family will die.” Just a day earlier, I had read the news reports of the mass murder that occurred in Nice, France, where a vehicle rammed into a peaceful crowd killing more than 80 people. As my eyes locked in on the Subaru barreling toward my family, I was certain the driver was intent on killing innocent lives and would not stop until everyone in the restaurant had been killed. Thankfully, just a few seconds later, I learned the driver had mistakenly hit the gas pedal rather than the brake as he went to park in the handicap spot and our lives would be spared.

The footage streaming in from Charlottesville was not so innocent. Many people were injured; one woman had been killed. I watched the footage of the car driving away as the perpetrator sought to flee the carnage left in the crash’s wake.

Immediately, social media exploded with debates and discussions surrounding who was to blame for the hatred and violence spilling onto our national discourse. The complex issues of race, cultural identities, and our nation’s shameful history of slavery has been placed front and center on our nation’s consciousness. The identities, motives, and words of our nation’s most costly war (in terms of lives lost), the Civil War, tapped deep into people’s hearts, minds, and emotions. The Civil War, more than any other, tore apart the U.S. and many of its most sacred institutions, even churches. Tensions are raw and emotions run deep when discussing this painful part of our nation’s heritage. Deep healing takes time and, as many psychologists will tell you, tensions and significant hurt, when left unaddressed, will flare up and cause pain and suffering in unexpected ways.

Yet, how can one living in today’s world navigate these flare-ups in a way that represents a Christ-like response of love and concern, while not negating the pain and suffering experienced by many?

As I have navigated my own experiences and thoughts online and engaged in conversations with friends from around the country, the tensions have mounted and disagreements abound. I humbly offer the following suggestions for online discussions of sensitive and emotional topics, as much to remind myself as to share with the broader community. I offer these suggestions from a Christian perspective, as it is the only perspective I can write from:

As much as possible, center and support your thoughts/perspective on Scripture. But, be careful not to proof-text in support of your point. Here is where John Wesley’s approach can benefit our thinking. We are called not to rely on the Bible alone, but to include Church history and practices, personal experience, and current knowledge and reason. Rather than regurgitating the talking points or labels our media diets promote, take advantage of the various ways of knowing and keep a sense of humility and openness.

The speed and efficiency of online communication is paid for by missing the multi-dimensional richness of a face-to-face conversation. Misunderstandings and hurt can escalate quickly on a screen. Always be ready to apologize, not for your convictions or beliefs, but for saying or doing something that another person might feel is a personal or direct insult. Kind and gracious words, even in the midst of others who are spewing accusations, generalizations, or mistruths, can do much to calm another person down and maintain friendships. Everyone can benefit from being spoken to kindly and with grace. In my own life, I consistently struggle with trying to avoid making arguments that may come across as condescending, snarky, or sarcastic. It helps for me to re-read my words before posting them and placing my harshest critics in mind to think of how they might receive the tone and tenor of my post.

I am a white, male in America from a middle-class background and teaching at a university. All these “labels” come with an enormous amount of inherent privilege that I am not always aware of or conscious of in my thinking. I must remain open to being told my perspective is not widely experienced by others who are different from me. That said, and because I am learning more about these things as I listen, I purposefully seek to post and respond to issues from a perspective that represents what I am hearing from groups in the minority. Though I have not experienced many of the sufferings or offenses I post about, I find it important to identify with those who have suffered. If I speak up on issues of concern from others’ perspectives (that are not typical for my “labels”), my social media readers may look at the issue differently than if they had seen the same thing written by someone they don’t understand or can relate to in life.

Similarly, I do my best to post and lift up in my feeds and discussions voices of people in minority groups who are also faithful Christ followers. In particular, when it comes to the issues raised by Charlottesville, it is critical that people of colors’ perspective is what matters most. We as a nation must listen deeply and carefully to those who have faced generations and decades of overt and subtle discrimination and abuse.

Our nation has done a lot of things right and has been a beacon of hope and inspiration to peoples from around the world. But, we are not a perfect nation and we have made mistakes. The Civil War and its historic reverberations are probably areas where we have done the most harm, caused the greatest confusion, and are most blinded by our own perspective. We can benefit from learning from others. In several posts, I have suggested we in the U.S. turn to Nobel laureate Desmond Tutu and his book, No Future Without Forgiveness, to learn what the power of truth-telling can do for a nation. South Africa suffered under apartheid (legally and unequally separating people by the color of their skin) for decades and there was tremendous hurt and suffering across the nation. Tutu led a truth and reconciliation commission that went throughout the country, allowing people to confess their sins/crimes in public and in front of the aggrieved parties, and in exchange were not prosecuted for most of these wrongdoings. The freedom and forgiveness that came about from this difficult but transparent approach to wrongdoing has made a huge difference in how South Africa has moved forward as a nation.

I regularly post on social media for theological, not political, reasons, though I admit my political understandings and thinking are deeply impacted by my theology, as I believe they should be for Christians. But, I must be careful that my words do not convey any sense that I am a better Christian or that only I know the truth. I want to remain open in my heart and in my words to being corrected and taught by others, even those with whom I initially deeply disagreed. Remember, even if we have access to God-thinking through the Bible and access to God’s bride, the Church, we are not God and should not assume to be all-knowing.

When dealing with challenges to our emotional and closely held beliefs, we often want to “objectify” others and label “hatred” toward enemies. Remember, others you disagree with are first and foremost persons in the image of God. Even when they embrace hateful ideologies, they as people are not to be hated. It is best not to say, “I hate Nazis” but rather, “I despise the Nazi or KKK ideology, and I feel sad for anyone who embraces such hatred.” And, too often, when feeling threatened by a logical argument, we can revert back to calling the person we disagree with some label (racist, liberal, communist, fascist, etc.). It is far more loving, kind, generous, and thoughtful to stop calling someone a label and instead address directly the idea or conviction you disagree with. Such tact is likely to be more successful as well!

Bathe everything you say and do with prayer. Speaking to God about what you share with others, in person or online, is an important practice to cultivate. In prayer, we can learn to listen to God as we know God listens to us. A consistent and ongoing prayer life helps us to bear fruits of the spirit: love, joy, peace, patience, kindness, goodness, faithfulness, gentleness, and self-control.

“In everything set them an example by doing what is good. In your teaching show integrity, seriousness and soundness of speech that cannot be condemned, so that those who oppose you may be ashamed because they have nothing bad to say about us.” — Titus 2:7-8 (NIV)