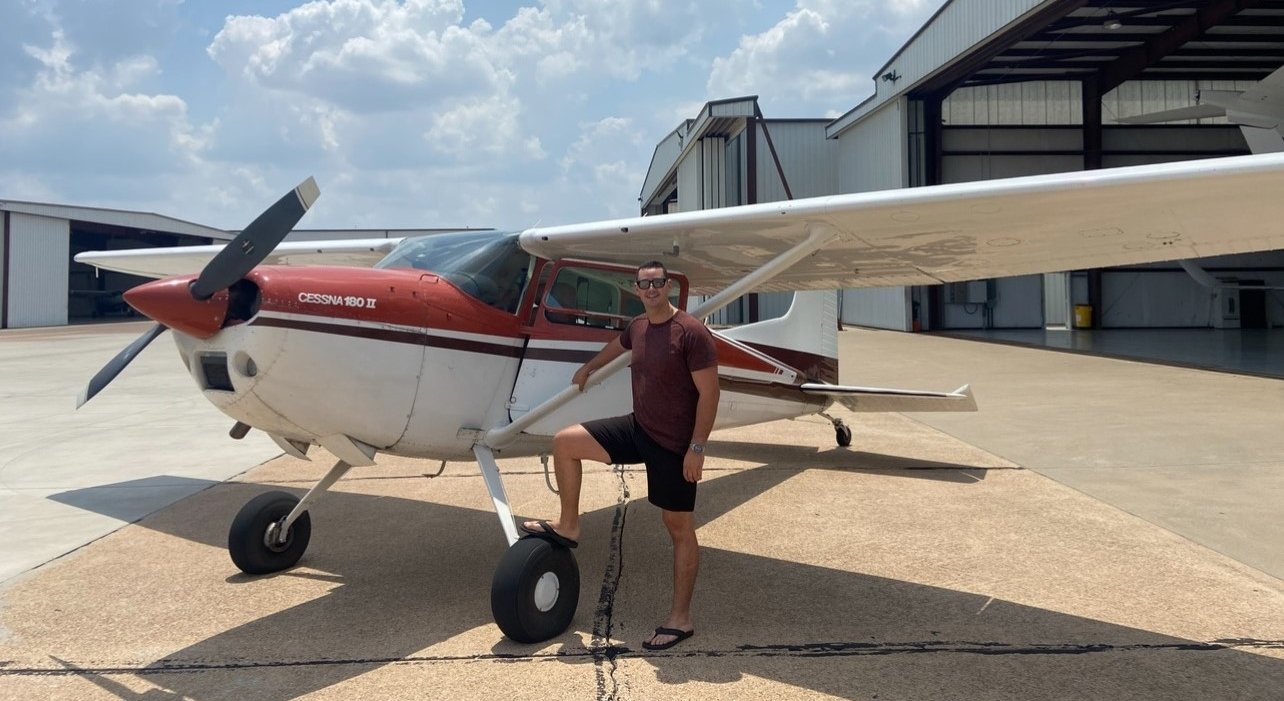 Andy Littlefield (15) helps others reach the sky. As a pilot for Jet Up Aviation, a San Diego-based on-demand private charter, Littlefield ensures that clients travel wherever they need to quickly and luxuriously. And with no fixed flight schedule, Littlefield has grown to expect the unexpected.

“You never really know where you’re going to go or for how long,” Littlefield said. “That makes it tough to pack a suitcase, but it keeps things interesting.”

In addition to piloting for Jet Up, however, Littlefield is also the business owner of Provectus Aviation, an aviation training provider founded in 2019 that emphasizes learning all aspects of being a pilot — including gaining the experience to instruct others.

Littlefield earned his Bachelor of Science in Finance from PLNU in 2015. And while finance doesn’t have much to do with flying an airplane, he explained, PLNU’s program taught him how to think critically, analyze situations, and create meaningful connections.

Littlefield was especially impacted by Daniel Bothe, DBA, associate professor of finance and dean of PLNU’s Fermanian School of Business, who consistently demonstrated humility and selflessness within his own success. Littlefield admired PLNU’s approach to education with a “purpose-driven” mindset. Although it was crucial to learn how to thrive in the business world, Littlefield realized educators’ and professionals’ moral approach to their work was just as important.

“I think it’s so important that people in education take pride in how people actually act,” Littlefield said.

“I think it’s so important that people in education take pride in how people actually act.”

Following his time at PLNU, Littlefield intended to serve in the U.S. military. However, despite years of serious training and preparation, he sustained an injury within the first few weeks of service that would end up altering those plans.

“It started as a really exciting experience but ended up being a low point,” Littlefield said. “But I believe everything happens for a reason; I learned a lot and it’s given me some good perspective about my life.”

“But I believe everything happens for a reason; I learned a lot and it’s given me some good perspective about my life.”

While transitioning out of the military, Littlefield found a program that allows participants to shadow a federal agency. He chose the Federal Aviation Administration (FAA), since he was interested in flying. Unfortunately, when he arrived at the federal building with his application, the front desk attendant said she never heard of the program and he’d have to have an appointment. Thankfully, she explained Littlefield’s situation to a manager who eagerly invited him in.

“The manager was an ex-military guy and he immediately opened the door,” said Littlefield. “Even though he hadn’t heard of the program either, he said ‘we’re going to figure this out. Whatever you need, consider it done.’”

Littlefield said he was so thankful to have that connection and believes God orchestrated that moment.

“I think it was light at the end of the tunnel — people who are willing to have a can-do attitude and help out,” he said. “I think it’s so important in life to just help people, even if you have nothing to gain.”

“I think it’s so important in life to just help people, even if you have nothing to gain.”

Littlefield worked with the FAA for six months. He explained the manager who helped him ended up being an important person in the FAA and has since partnered with Littlefield with Provectus and other personal business projects.

“These mentors took me in and I ended up going into business with them,” he said. “I fell in love with aviation after that.”

In 2019, Littlefield founded Provectus Aviation to fill a big need he discovered early in his piloting career, which was a growing void in the market for pilots and flying instructors. He sought to develop a company that would provide thorough, multi-faceted training to meet market demand.

“At Provectus we try to be the ‘harbor’ of flight schools,” Littlefield said. “We’re very meticulous and detailed, and we cater to clients’ specific needs.”

In addition to ensuring pilots are ready to earn their pilot’s license, Littlefield aims to equip clients to become flight instructors themselves.

Littlefield explained that many flight instructors in the industry are new pilots trying to log enough flight time to qualify for positions at large companies. He believes the instructors at Provectus’ experience and passion creates a quality end product — as well as inspiring others to provide top-tier flight education for the next generation of pilots.

“It’s typically kind of backward in our industry,” Littlefield said. “People teach flying to build hours and get to the airlines. At Provectus we instruct because we love it, not because we’re trying to get somewhere else.”

“At Provectus we instruct because we love it, not because we’re trying to get somewhere else.”

Littlefield cites PLNU as a big influence in his approach to teaching within Provectus. Like Point Loma, Provectus teaches pilots how to act in their industry.

“At Point Loma you have teachers who are very experienced in the professional world and they do it because they love it,” Littlefield said. “We definitely also take pride in our core principle to do things the right way and use our experience to put out a quality product.”

One of Littlefield’s biggest plans for the future is to develop a nonprofit to help raise awareness for the aerospace industry. Littlefield described piloting as a white male-dominated industry and feels there are lots of demographics who don’t have any connections to aviation. In reality, anyone can pursue their pilot’s license.

“There’s a lot of people that haven’t been exposed to aviation as a feasible career,” he said. “Whether it’s an inner-city kid from San Diego or a farm kid out in Missouri, we want them to know that flying is a really good career, and it’s attainable for everyone.”

“Whether it’s an inner-city kid from San Diego or a farm kid out in Missouri, we want them to know that flying is a really good career, and it’s attainable for everyone.”