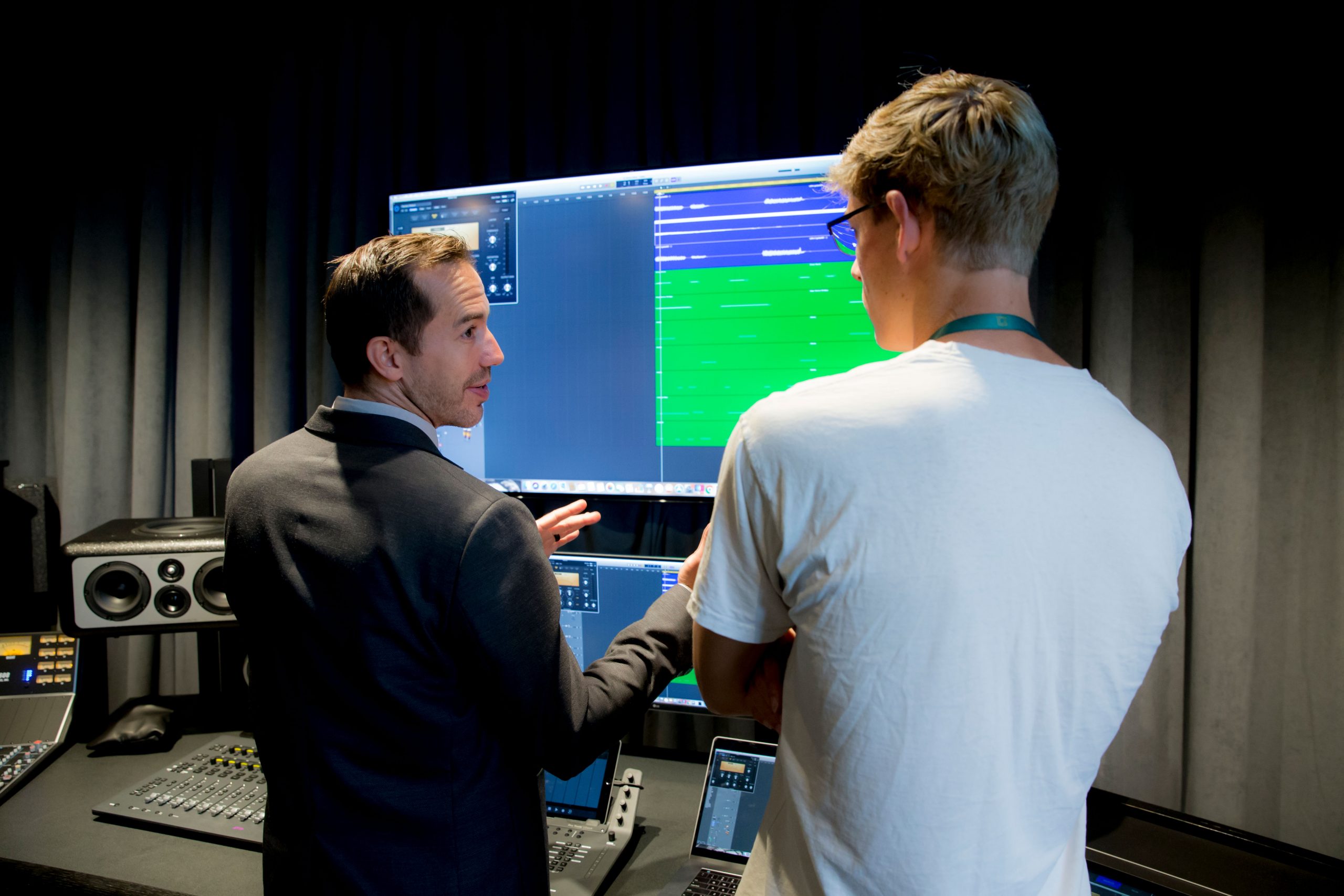 After working professionally in the music business, Chaz Celaya found himself at a crossroads vocationally. After contemplating the brevity of life and what was important for him and his family, he wrote down his goals and prayed, feeling God guide him toward an academic teaching career and, ultimately, PLNU.

“I wanted to work in higher education, teaching modern music production and music business in a faith-based environment,” he said. “That was pretty specific. I felt it was key because most of all I wanted to teach in a place where I could be open about my faith and speak into other people’s lives in that space.”

Part of that decision was influenced by his observations from working in Hollywood and around the world. He noticed what appeared to him to be differences in values and purpose in the professional world.

Since then, Celaya has helped build the program and the curriculum for the Bachelor of Arts in Commercial Music program. Part of the research he conducted while developing the curriculum included surveying fellow music professionals on which essential production and business skills graduates should have by the time they apply for music industry jobs.

Celaya uses the structure of a pyramid to explain the three unique pieces of the program.

“At the peak of it is music, a music degree,” he said, “The core is everything every music major does, which is learn the craft, the art, and performance skills of the musical art form. I believe that’s what drives people who are called to this. It’s what drove me. We love music in the way that it moves us and the way we can express ourselves through that.”

“Corner number two [of the pyramid] is actual music technology,” he continued. “So a lot of that is what we call the Digital Audio Workstation (DAWS) music multi-track recording software, but also hardware. There’s a big piece of learning how to utilize music technology to express themselves through their art.”

The third corner consists of learning about the music industry. Celaya notes that while passion is an underlying musical creative force, it alone cannot be a sustaining model from which to build a music career.

“If someone wants to do this for 30 years or as an actual career, you have to understand how the business works. It’s a creative business; it requires creative people. It very well could be that as students get involved and are exposed to the larger workings of how this industry works, they may be drawn to work in roles they never knew existed when they first came to school here.”

According to PLNU’s undergraduate academic catalog, the program consists of 31 units of core curriculum courses required of all music majors, ranging from music theory, music history, music technology, and applied music and ensembles.

From there, commercial music majors may choose between two concentrations, performance or production.

Students interested in the performance tract can take an additional 29 units focused on music entrepreneurship, music technology, and commercial music. Classes include History of Popular Music and Style and Improvisation. A class such as Songwriting will require students to write a new song every week, whereas Digital Audio I and II allow them to learn software programs like Logic Pro, Finale, and Bandstand.

On the production side are courses like Commercial Music Ensembles, Arranging I and II. For example, a new course offered in fall 2023 called The Business of Music introduces students to such topics as understanding copyright law and contracts, generating revenue streams, and developing professional partnerships.

The program encourages flexibility based on each student’s short- and long-term goals. It also encourages them to develop their technological skills or find their personal style in live or studio environments. In addition to solo development, there’s also a collaborative element to the process.

“It’s small enough where every student gets to explore the various sides of it,” Celaya said. “When they find the thing that they really love, they can dive in that more. We can team everyone up and play to each person’s strengths.”

“It’s small enough where every student gets to explore the various sides of it [commerical music]. When they find the thing that they really love, they can dive in that more. We can team everyone up and play to each person’s strengths.”

To aid in student instruction, the Department of Music transformed two spaces into music studios in PLNU’s Cooper Music Center. One is designed as a project studio, consisting of the basic setups students may find in a music creator’s home studio. Students are first introduced to this space in Intro to Music Technology, a required core class taken during their first semester of college.

“In this day and age, people are doing great professional work from a desk at home on their laptops. I want them to be able to own that space and learn how to get work done from day one. They check out the key to that space like they would a practice room. There’s a drum set in there, an upright piano, microphones, an interface, a desk with a USB controller, and studio monitors. It’s a great home studio setup.”

Music students are then introduced to the second control/mix room during the Studio Recording and Production course in the spring semester of their sophomore year. Here students learn to use the console, a patch bay, different microphones, and other equipment.

Once students complete a skills checklist, they can then use the space to record, multitrack, or mix live performances in Crill Performance Hall or other locations on campus. In addition, they can book the room to hold their own recording sessions for personal or class projects.

Celaya shared that the best part of his PLNU experience has been engaging with colleagues and students.

“It’s just been a great environment. I love the folks I get to work with, and I haven’t met a bad student yet. Hopefully, I never do. It’s been an absolute joy.”

Overall, Celaya is optimistic for the future of the program and its graduates. He believes PLNU has built the program he wished was available when he was a student.

“The best testament of the quality of our program is going to be our graduates. I’m excited to get PLNU students out there doing good work — being salt and being light wherever God has called them, whether serving in the church or the deepest part of the music industry. That would show through in the quality of work and a solid work ethic.”