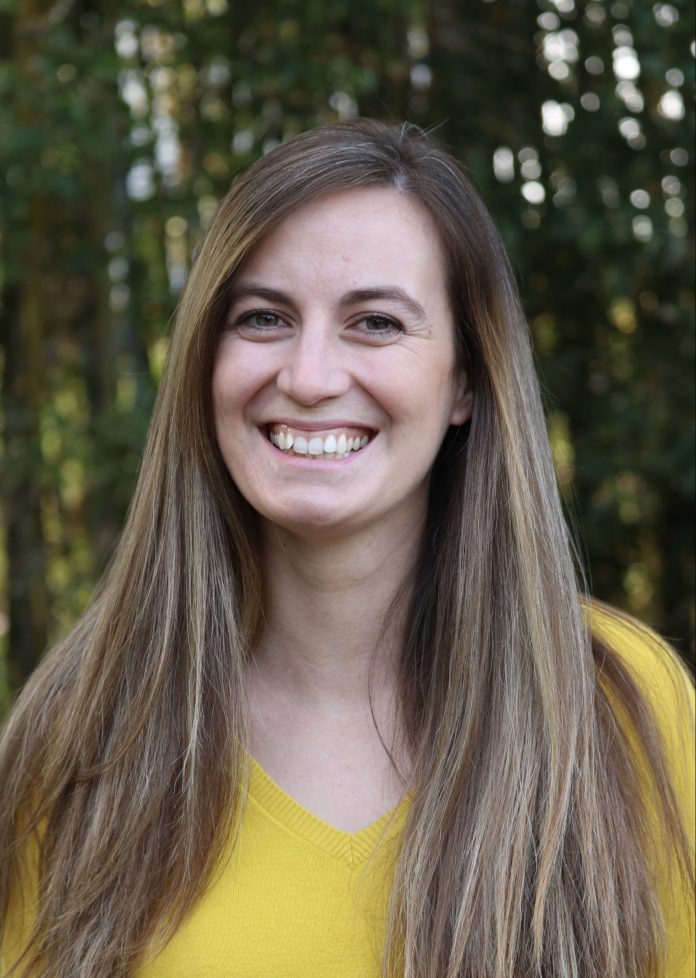 “How are you going to use your gifts?” For Chelsi Sparti (13), hearing this question from PLNU professors gave her the motivation to grow her passion for science into a career of protecting the environment.

Sparti is an interdisciplinary master’s student at UC Berkeley in the Energy and Resources Group, and previously served as the associate director of the Samuel Lawrence Foundation, a nonprofit that encourages collaboration among science, education, and the arts to engage the community in environmental issues. She has also worked closely with lawmakers to help new legislation, caucuses, and programs be passed through the U.S. Congress to promote more sustainable forms of energy. In 2019, her environmental work was honored with a Women’s History Month Award, presented by California Senate President Toni Atkins (CA-39).

Sparti’s passion for the environment began during her bachelor’s studies in biology at PLNU. Although Sparti entered the program focusing exclusively on biology, PLNU professors helped her break out of the “tunnel vision” of a single area of study by encouraging her to seek out other aspects of the issues she was passionate about.

“I started with an interest in biology and medicine,” she said, “but that grew into policy and international work.”

Sparti considers the availability of PLNU professors one of the most valuable aspects of her time there. She said professors like April Cordero, Ph.D., and Mike Dorrell, Ph.D., helped her explore how she could apply her skills to help remedy environmental issues.

“The mentorship at PLNU is so important, and it doesn’t end after you graduate,” she said.

Sparti was also a student senator during her undergraduate studies and was one of the first senior student mentees with PLNU’s Office of Career Services, which helped her learn about networking.

After graduating from PLNU in 2013, Sparti received the prestigious Fulbright Scholarship which enabled her to complete an English teaching assistantship in Sarawak, Malaysian Borneo through the U.S. Department of State. Sparti sought out research opportunities to study environmental problems caused by mega-dams and help find solutions. She was invited by her students and their families to visit their remote longhouse villages and taught English to the Malaysian students to help develop a lasting relationship between Borneo and the United States. Sparti said her group was the first formal American presence on Borneo since the Peace Corps in the 1970s.

Sparti initially prepared herself for life in a largely non-Christian community, however, she ended up in a region of Malaysian Borneo that’s home to many Indigenous Christians. This helped Sparti create a deeper connection with the people there.

Sparti explained that her time in Borneo inspired her to reconnect with her own Indigenous heritage. While she presents as white due to her European heritage, she said, she didn’t feel open to sharing with others about her own Northern Wintu heritage before living abroad. The Malaysian community celebrated all parts of their diverse cultural background, which encouraged Sparti to embrace her own Winnemem, Nomtipom, and Nomsus heritage, as well as her peoples’ connection to the land in Northern California.

“In Borneo, they celebrated all holidays from every culture,” Sparti said. “There was such a beauty in celebrating everyone.”

The Fulbright program is ongoing in Sarawak, Borneo. Sparti said she didn’t expect to feel so welcome in Malaysian Borneo, nor did she expect what a tremendous impact her time there would have on her life.

“You have to remain open to what comes next, and apply compassion wherever you are,” Sparti said.

You have to remain open to what comes next, and apply compassion wherever you are.

Living and teaching in Malaysian Borneo helped Sparti solidify her shift from biology to policy, technology and energy. One key problem she witnessed in Malaysia was heavy coal use and the presence of mega-dams which are destructive to surrounding natural resources and people.

Many people, especially Indigenous groups, live close to these dams but still have limited access to electricity — in short, they experience direct environmental injustice by suffering all of the ecological damage but reap none of the benefits.

“Being able to live in the forest and among Indigenous peoples was crucial for me to understand water shortages, biodiversity loss, and the importance of natural resource management,” Sparti said.

Rather than rushing to offer solutions, Sparti’s research group strove to study, listen, and learn from the Malaysian people to fully understand the politics and cultural issues — not just the environmental science.

“Working abroad is about being an observer and approaching with sensitivity,” Sparti said.

The process of removing dams and converting to more sustainable sources of energy is ongoing, but Sparti is thrilled to see the progress that has been made.

Since returning to the United States in 2014, Sparti has continued to be analytical about environmental issues and how they’re affected by U.S. laws. She said she’s specifically interested in the ways that risks created from vulnerabilities in our energy systems can be “mitigated by policy incentives in renewable technologies.”

“I’ve become more skeptical about our policies in the U.S.,” Sparti said. “You have to understand politics and be social-savvy if you want to make change and decarbonize the grid.”

To name one issue, the electric utility company Southern California Edison is storing 3.6 million pounds of highly radioactive waste within 100 feet of the ocean at the San Onofre Nuclear Generating Station (SONGS). With the Samuel Lawrence Foundation, Sparti organized two Songs for SONGS concerts of music, satire, and commentary to raise awareness of the dangerous materials. Sparti said she loved seeing enthusiastic locals and beach-goers so receptive to protecting the ocean and brainstorming solutions.

Sparti was also excited to see the Samuel Lawrence Foundation partner with Patagonia to create a mural at the Cardiff-by-the-Sea store and join Patagonia’s surf activism tour along the coast of California to raise awareness about the storage of the hazardous waste.

“We had a surfboard on tour that we took to all the beaches,” Sparti said. “Everyone at the events got to sign the surfboard as we traveled, and it really made everyone feel like they were a part of something.”

Sparti expressed her gratitude to PLNU for not only guiding her to broaden her career path but also supporting her through times of grief.

“A history of intergenerational trauma and mental illness has led to substance abuse in my family,” Sparti said. “I lost my mom one month after graduating from PLNU, and my dad passed away soon after I began graduate school.”

Through PLNU, Sparti found a tight-knit group of friends and supporters, many of whom had experienced similar losses.

“With PLNU’s incredible community supporting me, I was able to honor my parents and my friends’ parents as well,” she said. “A lot of that was taking time to recognize those we’ve lost and creating a tradition out of keeping their memory alive.”

Sparti knows her parents would be proud of the work she’s doing and that they’d want her to be bold and strive for excellence.

“Through grief and loss, I’ve been able to experience a vibrant, more present existence,” Sparti said.

Through grief and loss, I’ve been able to experience a vibrant, more present existence.

Sparti expressed that she never imagined her career would have such tangible and widespread impacts. In all the work she does, Sparti strives to stick to her core values of kindness and dignity for everyone.

“You don’t start somewhere and know exactly where you’re going to end up,” Sparti said. “It’s all about taking the next step.”