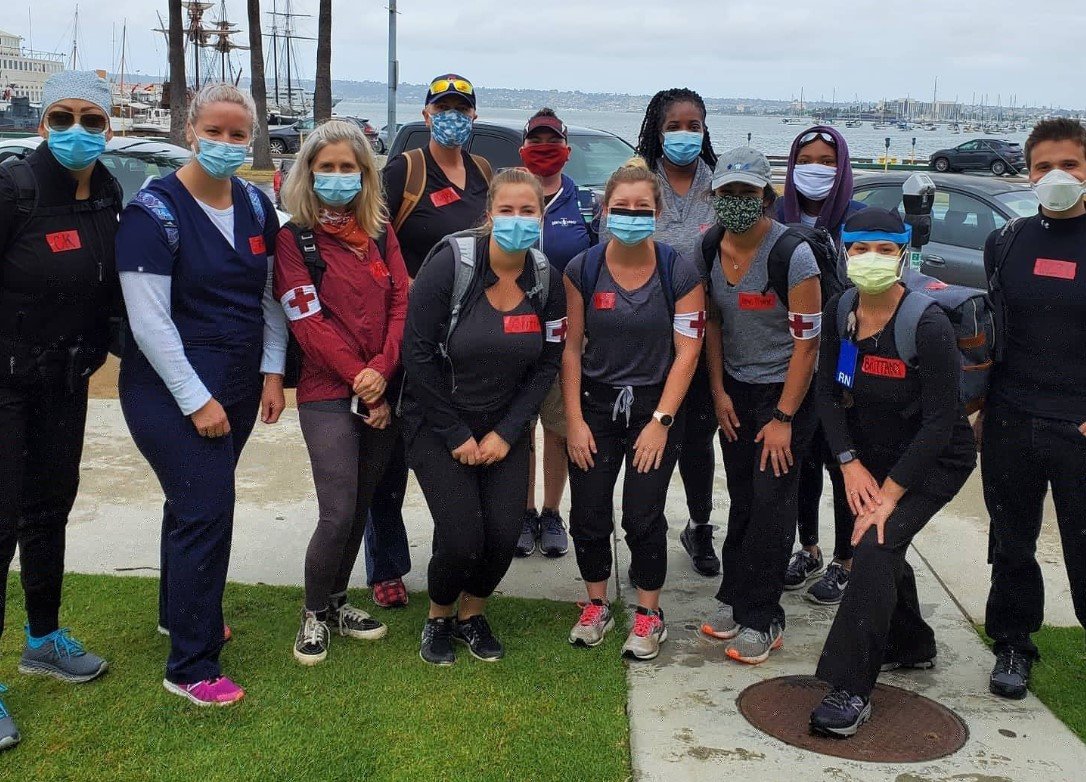 She is currently a clinical nurse specialist (CNS) for critical care at Sharp Chula Vista, overseeing the medical-surgical ICU unit. Not only has she been leading her team through a pandemic, but she has recently been part of a task force providing medical care at protests against racial injustice. After she and a friend attended a protest and saw the potential for injuries and illnesses among those in attendance, she saw an opportunity to help.

“Being raised in a Christian home along with my time at PLNU has really taught me that we follow and lead faithfully,” she said. “We communicate and care faithfully. That means something to me – to do God’s good work for the most noble cause, which is humanity.”

As a nurse and leader, Kelley has always been devoted to the care of her patients and team. She has also learned to care about issues of equality and justice and to treat people well no matter their backgrounds or beliefs.

“Because of my relationship with Christ, I believe we are all brothers and sisters regardless of what color we are,” she said. “As a nurse, if I am truly following our code of ethics, when I come to work, it doesn’t matter what you believe in or what you look like, your care should be the same.”

Unfortunately, Kelley has seen that there are disparities in healthcare, and it is something she feels called to address.

“Nursing has a huge voice,” she said. “There are millions of us. If we worked collectively, we could help to eradicate some of these inequities. This resonates very close to my heart. Our ultimate goal is to wield our nursing privilege as a weapon against racism, social injustices, and healthcare disparities!”

When Kelley witnessed the protests against racial injustice taking place in San Diego and elsewhere in the nation, she felt a stirring in her heart. As a Black woman, a Christian, and a nurse, she longed to bear witness to the racial inequalities she has seen and experienced in her job and life. She called a friend, and the two attended a downtown protest in San Diego as demonstrators. While they were there, they saw a potential need for nurses.

“Hypothetically, we could have had head injuries, broken bones, sun poisoning, dehydration – as a nurse you are always doing a needs assessment,” she explained.

“We felt a duty to help the injured and to help protestors safely voice their concerns because, as nurses, they are our concerns as well.”

She and her friend reached out to two other nursing friends.

“The four of us started as a small group and brought our own first aid kits and went to be present and to provide aid to anyone in need,” Kelley explained. “It was very clear to us that racial injustice is not in line with what nurses believe and practice. We felt a duty to help the injured and to help protestors safely voice their concerns because, as nurses, they are our concerns as well.”

The four nurses are part of the American Nurses Association California Chapter San Diego Regional Taskforce. Their efforts became a subgroup of the ANA chapter known as San Diego Protest Medical Response. As people have heard about the group’s efforts, more have joined them. Kelley says there are now EMTs, students, LVNs, and non-medical professionals with first aid training who are working with them. They have also served in tandem with the San Diego Street Medic Collective. In addition, the taskforce is using donations to put together kits with water, sunscreen, granola bars, lip moisturizer, and masks for the homeless population in San Diego.

Overall, Kelley says the response to the taskforce’s presence at protests has been defined by gratitude, which goes a long way for her and her team. Despite the long hours she’s adding to her already busy role as a nurse leader during a pandemic, Kelley is glad to be able to give her time and skills to others. It’s why she became a nurse in the first place, and why she has always pursued additional education and growth.

From her first role as a critical care nurse at Sharp Chula Vista in 2006, Kelley’s strong work ethic helped her progress through roles with increasing levels of responsibility – such as mentor, preceptor, resource nurse, and rapid response nurse. In 2011, she earned a role as a clinical lead educator, which made her a designated leader within the intensive care unit (ICU). In 2013, Kelley joined PLNU’s RN to MSN program and graduated with her master of science in nursing and CNS in adult gerontology in 2015. Then in 2017, Kelley started in the first cohort of PLNU’s Doctor of Nursing Practice (DNP) program. She graduated in 2019.

“PLNU does a lot, but the one thing I can say in addition to putting Christ at the forefront is that they emphasize a heightened level of emotional connectedness and empathy,” Kelley said. “Point Loma’s leadership teams and professor teams emphasize that in their curriculum. They also make sure they promote self-care. Having attained two degrees from PLNU, that is also firmly embedded in the way I choose to lead others.”

Kelley noted that if nurses or others want to volunteer with the taskforce, they can reach out to anac.sandiegonurses@gmail.com. To donate, they can email socialjusticerns@gmail.com.