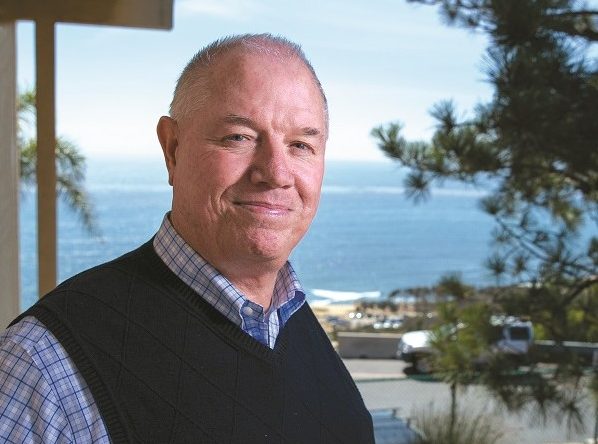 In Apple Valley, Calif., a volunteer deputy sheriff heaved a sorrowful sigh before walking up to a house belonging to a family that had just lost their child in a drunk driving accident. It wasn’t his first experience delivering this type of news. Over his 10 years as a deputy sheriff, he would walk up to many doors of families in similar circumstances. Whether it was sharing the news of a suicide or answering a domestic violence call, it was the deputy sheriff who came to the aid of many people and helped to shoulder their burdens.

This deputy sheriff was Dr. David M. Phillips, now PLNU’s Dean of the College of Extended Learning. During the time he worked in law enforcement, Phillips was primarily a pastor at Apple Valley Church of the Nazarene.

“There are multiple ways you can handle difficult situations like that and one of them is to try to be compassionate, helpful, and empathetic, rather than just delivering news,” Phillips shared.

After graduating from Pasadena College (now PLNU), Phillips served for 25 years as a Nazarene pastor in Southern California and Colorado, 10 of those volunteering as a deputy sheriff. But in 1998, despite his love for pastoring in the church, Phillips was asked to join the administrative staff at Nazarene Bible College (NBC) to teach, train, and educate Bible pastors.

One of his assignments at NBC was to develop an online degree program, one that was extremely successful. Because of his work and administration for this program, in 2011, Phillips was asked to join Trevecca Nazarene University (TNU) as Dean of the Graduate, Adult, and Online Programs. While he would still be working in Christian higher education, his role at TNU would be a definite shift away from his initial passion: to serve others with a primary focus on pastoral ministry.

Phillips and his wife, Christine, prayed for guidance. They soon realized that at TNU, he would still be serving the overall spiritual mission of the church and that, ultimately, the move was good.

“In the verse of Scripture that tells us God will give us the desires of our heart, a lot of people think that means, ‘I want this so God will give it to me,’” Phillips said. “I don’t think it has anything to do with that. I think what it means is that God will put into your heart the desires that He wants you to have. In that transition period, God changed the desires of my heart.”

As Phillips continued his career, he also furthered his education by earning his doctorate and four master’s degrees. He is currently working on his fifth.

In the fall of 2014, Phillips joined PLNU to help launch the College of Extended Learning, a new academic division that benefits a broader audience of nontraditional students by providing them access to higher education. He was selected for the position by provost Dr. Kerry Fulcher, who knew Phillips from his reputation in higher education, expertise, and consultations he previously provided PLNU.

“Through his consulting work with us, it became clear to me that Dave would be a great fit for PLNU,” Fulcher explained. “Fortunately for us, when we asked him if he would be interested, he sensed God’s calling back to his alma mater. Dave is highly experienced, has a high work ethic, has excellent people skills, is collaborative, and wants to give his life to Kingdom work. We are blessed to have Dave leading this new effort at PLNU and he is exceeding all expectations.”

“There are a lot of individuals who would love to have a PLNU education, but our residential campus environment is not necessarily conducive to their life situations,” Phillips said. “Through our extended learning programs, so many people can get an education through PLNU, and it will be a meaningful education, beneficial to their lives and their careers. These programs allow us to reach people who we wouldn’t otherwise have the opportunity to reach.”

Phillips feels his work is most meaningful when he is helping others improve their lives by assisting them where they are.

“At the end of the day, when I look at what I’m spending my time on, I feel it is honorable to God and that He is pleased,” Phillips shared. “You don’t have to just be a pastor to do that.”

Phillips and Christine have recently taken up sailing. They try to take others out on a sailboat as often as possible, primarily those who don’t normally have access to such an experience or who don’t have any training. Phillips enjoys the relaxation, beauty, and quietness of the water and looks forward to the next chance he can get to be out on the bay.

Related Article: Professor Rick Kennedy teaches his students history beyond the classroom — aboard a sailboat on the Pacific Ocean.

Fighting Ebola by Changing the Soil