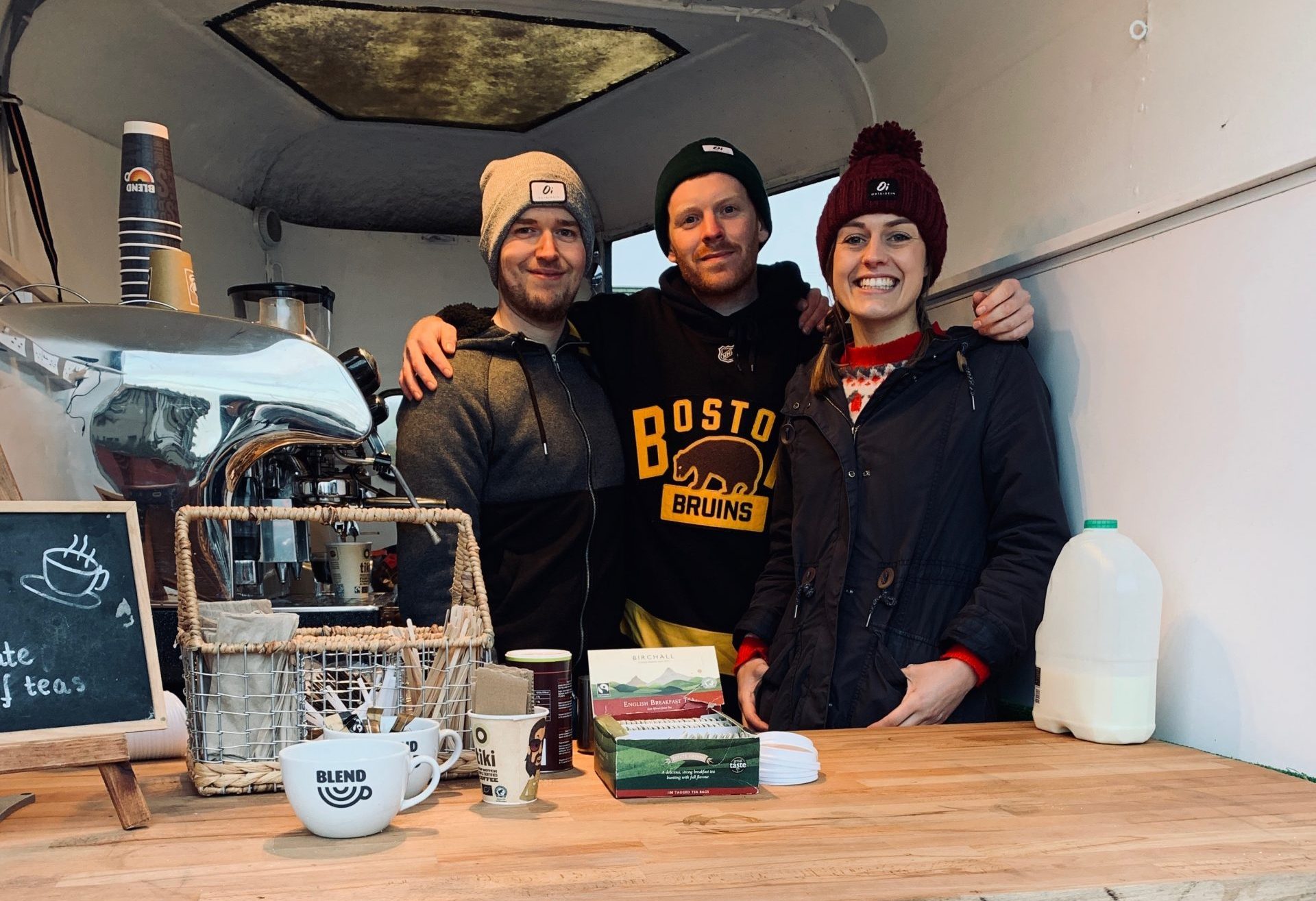 Striking the right balance between profit and cause has long been an elusive exercise for business owners. As more consumers are interested in the mission behind everything from the shoes on their feet to the way their coffee is sourced, it’s also become a vital aspect to any brand.

And though it wasn’t his initial goal, that’s what alumnus Derrick Thames (06) has achieved at BLEND. The Scotland-based coffee shop has all of the sustainable practices of a high-end roastery with one notable difference: it’s also where Thames preaches.

“Church here is much more traditional,” said Thames, who also had to adjust to the difference in congregation age and size when he moved to pastor in the United Kingdom.

“There was definitely culture shock,” said Thames. “But more than that, honestly church shock too. There’s a much older congregation here.”

Thames and his wife, Dayna, were both missionaries at the time and had been serving in Kosovo. They moved to Scotland in 2013 and spent a few years pastoring at a church in Glasgow before realizing that something was missing.

“It wasn’t what I thought it would be,” said Thames. “The church was great, but we weren’t really connecting with people who needed help in so many ways.”

Thames also felt tired of how church was being done every Sunday. He wanted to connect with the community on another level.

“So after a bit, I talked with some of my friends and said we need to do this differently,” said Thames. “Why don’t we start a coffee shop and connect with people? Just build relationships with people.”

From those early conversations, the first BLEND location was soon established in Perth. Since then, BLEND has expanded to three more physical locations with two mobile units available for off-site brewing.

Thames’ and his co-founders took a lean model approach to starting the first shop. They gave themselves 30 days to pay back in cash whatever they couldn’t pay up front. To this day, they still have no debt.

And while Thames admits it wasn’t his intention to start a successful business, he’s happy that the model is serving the people he originally intended to reach.

In addition to serving customers and providing a space for his congregation to meet, the shop also partners with the Dundee Refugee Council, universities, and local charities. Each year, they give thousands of pounds away.

“BLEND is more than just a name, it’s also an acronym for us,” said Thames, whose staff members memorize the meaning behind each letter of the moniker which stands for Bless, Listen, Eat, Nurture, and Dare.

The last letter, which stands for “Dare,” sets the shop apart.

“This is the one we have to push our staff in and that we’re constantly reinforcing,” said Thames. “We always tell them that we don’t expect you just to sell our customers a product, we expect you to get to know them.”

And last year, even with the pandemic, was no exception. BLEND continued to serve the community by making use of the mobile units, adhering to strict UK parameters. Even with fewer in-person customers, all four locations made it through with the support of the local community.

“People would come in and just give us money,” said Thames. “It just goes back to the idea that if you win over the local community, they’ll support you when you most need it.”

As the UK begins to make its way out of the pandemic, Thames envisions BLEND continuing to be a place of rest, connection, and responsiveness to the simple Gospel.

“We try to keep things really simple,” said Thames. “Simple doesn’t mean simplistic though. We’re still going to do things well. Some of the best things are simple.”

With a growing agnostic and atheist population, the UK has become a different mission ground for churches and pastors in the past few years. Thames shares that many members of the younger population are uninterested in church. But they will show up for coffee and a free piece of cake.

“We’re trying to overcome a lot of things here when we introduce people to the gospel,” said Thames. “They are not walking through church doors … They say that’s something we tried, and it didn’t work. And they won’t go back to the same places their grandparents went.”

Instead, you’ll find Thames and his church meeting in one of their BLEND locations, breaking bread and sharing in conversation over a simple meal done well.

“For us, it’s become a fresh way of being the kingdom on earth as it is in heaven,” said Thames.