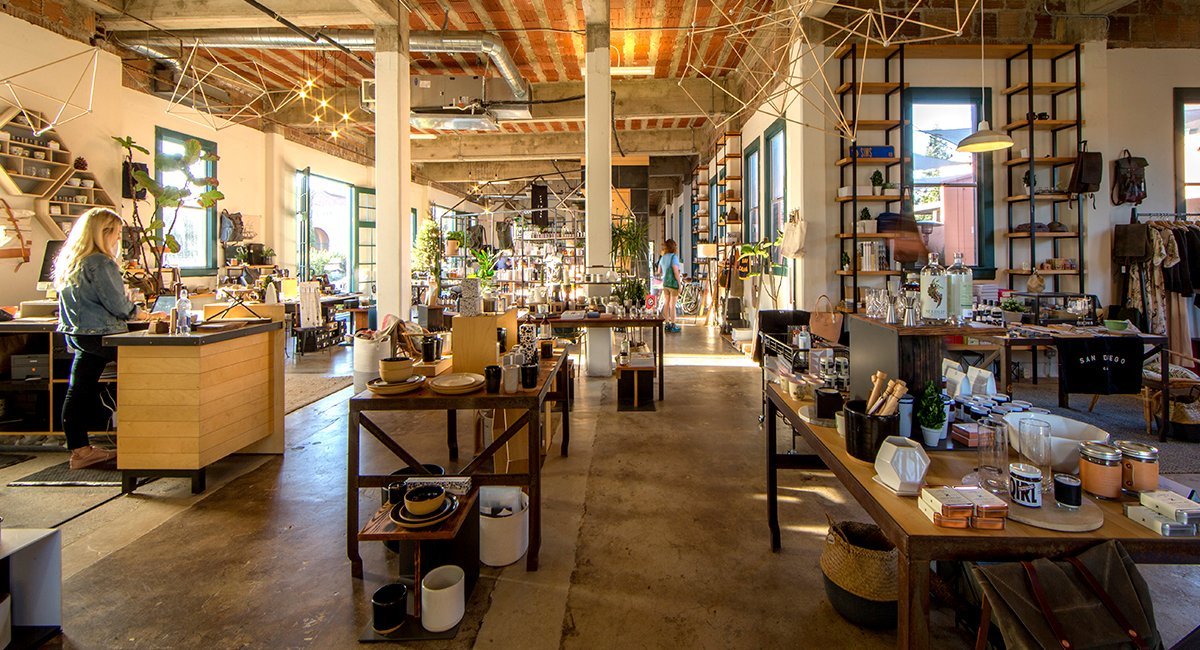 Home Topics Leadership & Business Designing for Spaces and Community: If You Build It

When I walked into Moniker General for the first time, I didn’t know that the space was built with a specific mission in mind. As I stepped over the threshold of the former barracks, I was greeted by white hexagonal tiles, live edge wood tables, the smell of roasted coffee, and the barista behind the counter. She asked for my name and took my order, simultaneously making friendly conversation and my beverage.

Coffee in hand, I wandered past the two young hipsters talking animatedly, over to the carefully curated retail space, lined with Linus bikes and locally made backpacks. I then turned and headed out to the 1,300 square feet patio space, admiring the outdoor lights strung overhead before finally taking a seat on a long bench across from a couple of young moms who regularly oscillated between their conversation and checking on their toddling babes. What I could not have guessed at the time was that the creators of this space wanted me to sit there. In fact, they intentionally engineered this “general store” with me in mind.

“IT ALL COMES BACK TO PEOPLE”

The Moniker spaces — Warehouse, General, and Commons — were each created for specific and unique purposes, but with the same mission: to bring people together. Moniker Warehouse is home to multiple businesses, including Moniker Made, producer of high-end furniture, and also serves as a venue for concerts, weddings, and events. Moniker General is equal parts coffee shop, retail space, and social hangout. Finally, Moniker Commons, the newest addition to the brand, is a co-working space for small businesses and individuals who don’t yet have an office of their own.

Moniker founder and CEO, Ryan Sisson, and president and PLNU alumnus, Nate Cadieux (08), saw a need in today’s culture for people to truly connect, outside of the rose-colored filters of Instagram and the politically-charged walls of Facebook, and they’re doing their best to create spaces where people can come together and meet those needs.

Cadieux explained: “Real tangible places, that’s where true intimacy happens. It’s not just a generational problem; it’s a societal problem, our addiction to technology, and we all struggle with it. We’re all hyper-connected digitally and disconnected emotionally. And we really believe that the built environment is where you get to connect intimately with someone, and we believe our spaces can be vehicles for that.”

So just three miles from the PLNU campus that Cadieux formerly called home, and where Sisson regularly speaks to MBA classes, nestled into the heart of Liberty Station, Moniker General and Moniker Commons sit as physical manifestations of a calling to cultivate and inspire community.

But long before these buildings were retrofitted with custom furniture and filled with industrious dreamers and coffee lovers, there were just a couple of guys trying to follow God’s leading and serve a city.

Moniker was born in 2008, as the brainchild of Sisson and a group of like-minded creative friends. “We were idea people and problem solvers. So we would just hang out on a weekly basis and talk about ideas,” Sisson explained. In the midst of the housing crisis and global economic downturn, Sisson had been laid off from his job with real estate development conglomerate, McMillin, but was finding inspiration amongst his friends working in the nonprofit sector.

Moving into the role of VP of business development at a local digital ad agency, Sisson grew the early version of Moniker on the side, not joining his own staff full-time until nearly six years later. Although Moniker now boasts eight companies and 10 brands — their physical spaces being just three of these — in the beginning, the company gained traction by both helping faith-based and non-profit organizations engineer and execute on event spaces, as well as by supplying full-blown interior design and fabrication services. In those early days, Sisson and his team found that their biggest challenges centered around finding the space for the community-based events they were putting on.

So they took a leap of faith and leased an old 6,500 square foot warehouse in downtown San Diego and began using it for co-working space, events, and as a workshop for their growing building projects. That building is known today as Moniker Warehouse and has grown to 18,000 square feet as more on-site property became available. The formerly derelict warehouse is now home to 15 companies and the workshop for Moniker Design and has also become a popular destination for weddings and other events.

Throughout this time, Sisson maintained a personal focus on serving others and empowering people — both his clients and his team. Sisson and Cadieux had met years earlier at McMillin, so when Cadieux had a business idea, he reached out to Sisson. From there they started meeting regularly for coffee and began dreaming about partnering in real estate together, using Moniker as a platform to create spaces for the Liberty Station community. Cadieux was leading the project management of Liberty Station at McMillin and was having difficulty finding local boutiques willing to take the risk of a second storefront. That’s when Cadieux had the idea of creating a boutique retail experience based on the locally made products from Moniker Warehouse.

The duo pitched the idea to McMillin in 2015, and Moniker General was born. From its conception, Sisson and Cadieux wanted the retail store to be a community hub, which inspired the concept of a central “general store.” It would carry staple products and seasonally curated specialties. The idea of adding a coffee shop inside the store was a secondary consideration, a way of encouraging people to stay and interact.

In fact, the design of the store itself was engineered to encourage social engagement. Cadieux loves telling the story of the fire pit that sits between the General and the Commons. “When we designed the fire pit furniture out there, it was intentioned to be too big for two people so you end up sitting next to people you didn’t know, and you could also sit close to the people you were with. We originally planned on having these Adirondack chairs, but then you’re kind of separated. So we [Moniker Design] built these arched benches that about five people could fit on. I think just seeing people use the space is the most fulfilling thing to me.”

Moniker General has been open less than two years, and the venture has become a meeting place for the community. In fact, it’s gone so well that Sisson and Cadieux partnered up again to launch Moniker Commons this past summer — this time creating a place to serve businesses and entrepreneurs who need a physical location to work and hold meetings.

Although the audience they’re serving may have shifted, their mission has not. Sisson and Cadieux hope to see their co-working clients become so successful that they’re forced to find more space and move out. “And we’re going to celebrate that,” Cadieux predicts.

Related: In what ways can Christian business professionals engage and transform the culture? 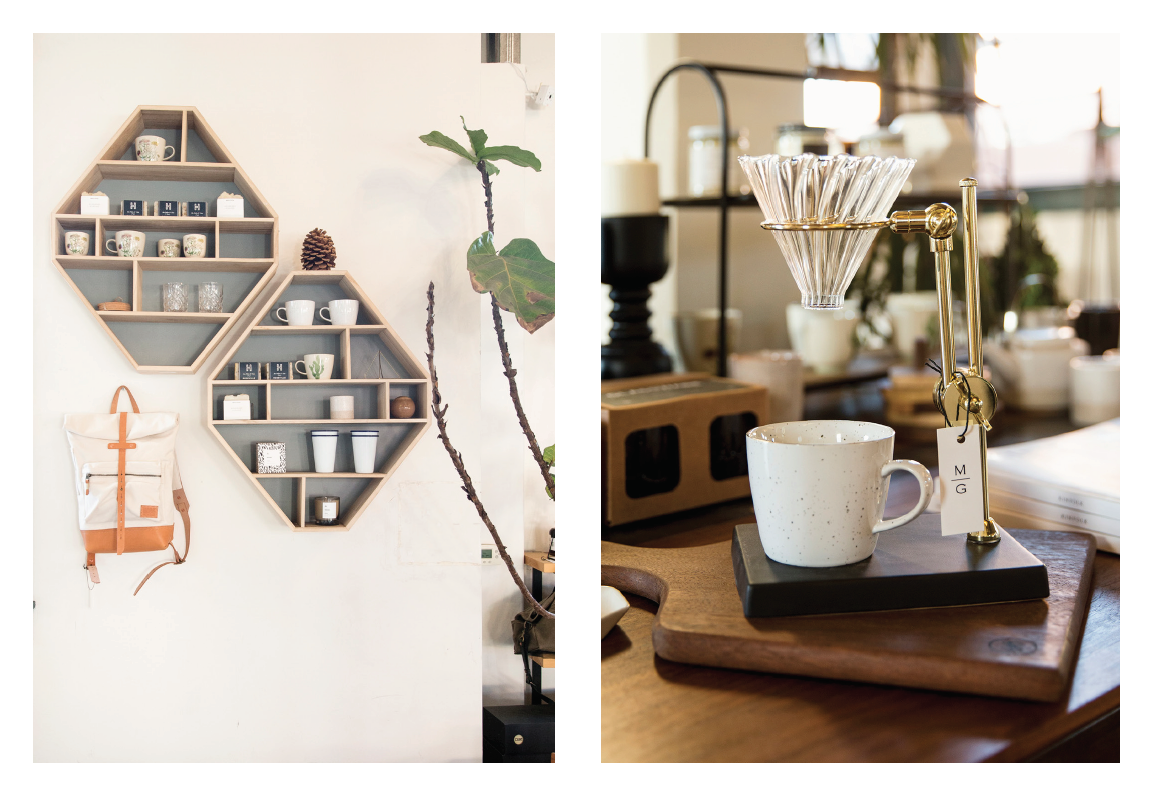 TO DREAM A BETTER WORLD AND THEN BUILD IT

The journey to this point has not been without risks, doubts, or hurdles, but Sisson and Cadieux had faith — in God, in the team, and in the vision itself. The friends and partners are quick to say that they didn’t know what they were doing when they started.

Cadieux elaborated, “Two years ago we had no intention of opening a retail store, but we saw this opportunity and felt like we can do this differently.”

Despite any feelings of self-doubt or lack of expertise, they moved forward, taking the hurdles they faced one at a time. “Faith is beyond the most important part,” said Sisson. “Scripture over and over again is like, ‘You’ve just got to get out of the boat. You just gotta go for it.’ I think that’s what it comes down to. Yeah, the doubt is always going to be there, but knowing that this is my calling, I just have to go.”

For Sisson and Cadieux the call to go was a call to stay, in San Diego that is. “There was a season of life where I lost a lot of friends to cities like Boulder and Nashville and Brooklyn, and I questioned, ‘Why do you need to leave? Why not stay and create the thing that you’re going to pursue somewhere else?’” said Sisson.

Related: Find out how you can develop an entrepreneurial mindset and take risks without losing it all.

He continued, “We hope that Moniker is helping to create that reputation that San Diego is a place for creatives, and it is a place for innovators and entrepreneurs. We’re not trying to create the ‘next’ anything. Just the best version of San Diego. And so we’re creating spaces that give other people permission and inspiration to do what it is that they were called to do and hopefully stick around, or even better, come back.”

“We’re passionate about San Diego,” said Cadieux. “We have a desire to impact our city for good and see what it can become. Every business we’ve created started with a vacant space and with a concept that was created for it and for what the immediate community around it was missing. We ask, ‘Where is a gap in the city, where we can create a unique concept that specifically meets the needs of the surrounding area?’ As we seek to fill those gaps in our community, to meet the needs of others, perhaps our own needs, our own gaps are filled as well.”

“I think we’re all built, by design, for community,” said Cadieux. “And whether that’s a faith-based worldview or a history-based worldview, people have always come together and thrived in community. I think it’s very sad to see how many people in our country struggle with depression and issues like addiction, and the best cure is community — a sense of belonging. And naive or not, we really believe that bringing people together is a way to bring joy and fulfillment into people’s lives. Even if the only interaction we get to have with you is handing you a cup of coffee, there is still a way to do that with a Christ-like desire to love and serve you.”

“To dream a better world and then build it.” The hand-painted manifesto catches my attention as I walk along the light-soaked cement floors of Moniker Commons. First, because of the beauty of the local artist’s work. And then, because of the sheer, simplistic audacity of the statement.

Audacious though it may be, that’s exactly what Sisson and Cadiuex have done. They dreamed of a better version of San Diego — one where people connect in a meaningful way, where a creative community thrives, where people feel a sense of belonging and purpose — and they’ve begun to build it.

Related: Check out two other PLNU alumni who are serving San Diego as entrepreneurs and leaders.