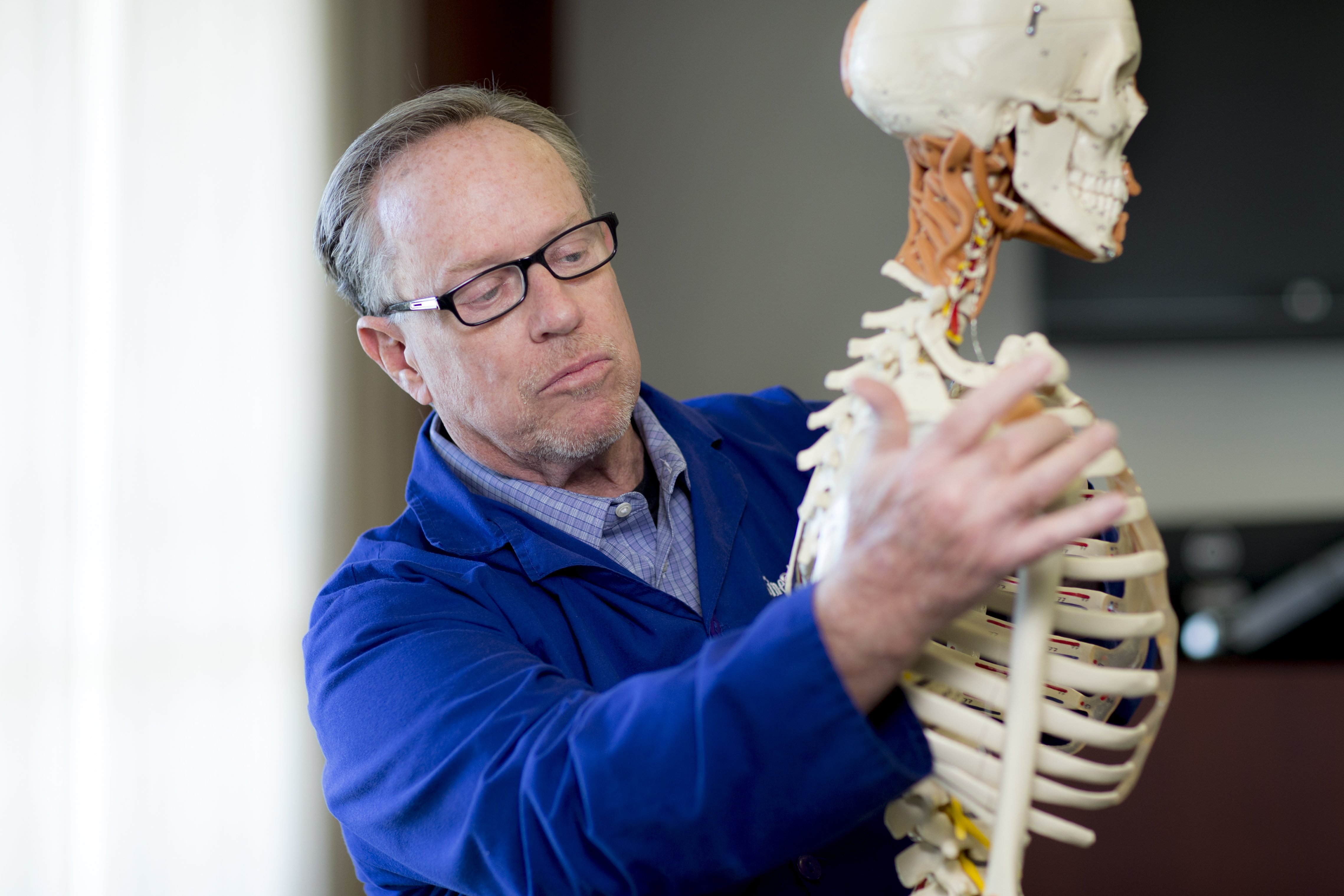 When people talk about retired professor of kinesiology Leon Kugler (72), Ph.D., they affectionately refer to him as “Kug.” What they speak of is Kug’s passion and its source.

“Kug always wanted students to know that he loved God completely. And it’s a wonderful thing for the world when someone loves God completely!” said Jeff Sullivan, Ph.D., ATC, at Kug’s 2018 retirement dinner. Sullivan is co-chair of the Department of Kinesiology at PLNU along with Brandon Sawyer, Ph.D. Sullivan, Sawyer, and Nicole Cosby, Ph.D., ATC, director of the athletic training program, are also Kug’s former students. All three say they wouldn’t be where they are today if it weren’t for Kug.

“My passion, what I thought about when I woke up in the morning, was my students,” Kug said. “My purpose was to serve them. I think my greatest contribution was knowing them, aspiring with them.”

Kug was born in Los Angeles and transferred to Pasadena College (now PLNU) when he and his wife, Chris, who was a student at Pasadena, married. He was mentored by Carroll Land, Ph.D., who was both his professor and his baseball coach. After graduating with a degree in physical education, his first calling was to serve as a high school teacher and coach, and he lived out that calling for six years. In 1975, he earned his master’s in administration of physical education at Cal State Los Angeles. Then Land called and asked Kug to consider returning to PLNU to serve as the university’s first certified athletic trainer. Over the next five years, he served not only as the certified athletic trainer but also as head soccer coach, intramural director, and professor. He and Chris had three children during those years. It was, understandably, a very busy time. But Kug said he felt so honored by all the opportunities he had to serve and make a difference during those years.

In 1988, Kug earned his doctorate in exercise science from the University of Toledo with a minor in anatomy from the Medical College of Ohio. “That became the laying of the foundation for the gross anatomy lab and academic program I created for our students,” he said. “I see the hand of God in that.”

“That became the laying of the foundation for the gross anatomy lab and academic program I created for our students. I see the hand of God in that.”

PLNU’s gross anatomy lab and human anatomy project are among Kug’s more recent contributions to the university and students. The lab, which was made possible when the new science complex was constructed, allows students to study human cadavers to better understand the workings of the human body. According to Kug, the lab is state-of-the-art.

“The gross anatomy lab is the culmination of the university investing in something remarkable for an undergraduate school,” he said.

A plaque on the door to the lab includes the following: “We dedicate this Gross Anatomy Lab to Dr. Leon Kugler for the 40 years of dedication to his students, for the tireless efforts to instill in young minds a love for human anatomy which emanated from his love for Christ, and for the future students who will directly benefit from his unending vision for excellence in Christian higher education at PLNU.”

The lab is not only representative of PLNU’s commitment to providing students with cutting-edge science experiences, but it is also emblematic of Kug’s many gifts to the university, the kinesiology department, and students.

Not only was Kug himself the university’s first certified athletic trainer, but he also launched athletic training as a major. In 1998, he began a four-year process of proposing the Athletic Training Education Program (ATEP), creating its curriculum, designing the athletic training facility, attracting students to the program, and carrying it through the rigorous process of accreditation in 2003.

Though launching a new major is a significant accomplishment for a career on its own, Kug wasn’t finished. After five years leading the ATEP, Kugler began the process of developing the exercise science program, which later became the applied health sciences program, one of the largest majors on campus today. The program prepares students for graduate school and professions in fields such as physical therapy and medicine.

As the lab plaque explains, “He knew the world needed Christian healthcare providers who would impact the world for the Kingdom and would pursue their calling to serve as compassionate health care professionals.”

While launching programs was one hallmark of Kugler’s career, he was equally well known for the tremendous impact he had on students as an adviser.

“Kug took that role incredibly seriously and would typically spend a short period of time on scheduling and a good chunk on students’ personal lives and faith,” said Sawyer. “He prayed with every single student. Since he was the primary adviser for applied health science, he had 100 to 130 advisees at a time. With so many students, he still had that deep connection and stayed connected. He was the pastor of our department and the shepherd of so many lives.”

“I owe my calling and my career at Point Loma directly to him and his powerful influence — but I have also had the privilege to learn from him as a colleague and friend,” Sullivan said at Kug’s retirement celebration. “I have had the unspeakable joy of having an office next to Kug’s, and I have watched God do his work through him daily as students walk into his office!”

Eric Sorenson (03), who is now a professor of kinesiology at Azusa Pacific University, agrees.

“Kug is the most impactful mentor I have ever encountered,” he said. “He brought me under his wing as a freshman at Point Loma and continues to pour into my family’s life 15 years later. He cares deeply about so many alumni that have studied under him — for their physical, emotional, social, and most importantly, spiritual well being. I honestly don’t know how he stays in close contact with so many people. As a current professor, I aspire to love and support students just like Kug. And if I make even a fraction of the impact that he has over the years, it will be a profound accomplishment.

“Once in a lifetime a professor comes along like Dr. Leon Kugler.”

In addition to spending time with his advisees, Kug inspired students in the classroom, encouraged them to study abroad, and mentored them on honors projects. Jennifer Spurlock (92) was one of his honors students. She now has her M.A. in cardiac rehabilitation from Ohio State University and serves as the cardiovascular quality coordinator at Dominican Hospital in Santa Cruz, Calif.

Spurlock said, “Once in a lifetime a professor comes along like Dr. Leon Kugler. His professional skill, talent and level of care for his students is unparalleled. I would not be where I am without him and the positive impact he made in my life continues to this day.”

Kug also served as a leader on seven LoveWorks short-term mission trips. “LoveWorks was such an important part of my Point Loma days,” Kug said. Kug served in New Zealand, India, Liberia, and Tanzania and Jamaica twice each. Several of the trips included pre-med and nursing students, whom Kug was able to mentor in providing care for people in need.

“I had great co-leaders,” Kug said. “These people became dear, dear friends along the way. It was a blessing of God to get to share lives and pray with people as they went through LoveWorks experiences.”

Kug is especially happy that a hallmark of LoveWorks has always been to provide support to the missionaries and churches who are in a location for the long-run.

“We went not to go in and change things,” he said, “but to work alongside and to be a spiritual and emotional lift and to love with the love of Jesus.”

In addition to serving with LoveWorks, Kug spent time overseas as the athletic trainer for the British National Baseball team in 2001. He has also taken students to visit sports medicine centers throughout Europe.

In his retirement, Kug continues to serve God and others and to maintain his grateful attitude. He and Chris moved to Orting, Wash., to be closer to their family. But they have found so many additional blessings in their new home as well.

“The thing that is the serendipity of moving here is we live in a little community of 7,500 people,” Kug said. “It’s green. We have a little creek. We thought we were moving here to be near the family, but we are also blessed by the richness of the fellowship and teaching at our church. I am at a place of knowing Him better and being engaged in service.”

The Kuglers attend Puyallup Church of the Nazarene where they are in fellowship with other PLNU alumni. They are particularly blessed by their home group. In addition, Kug is substitute teaching at Orting High School.

“I pray that the light of Jesus would shine through me,” he said.

Those who know Kug have no doubt that it does and will continue to do so.

PLNU is pleased to present Kug with the 2019 Distinguished Achievement Award. Join us Saturday, November 23, 2019, at Homecoming to hear from Leon Kugler in person during the Distinguished Award Presentation.

Related Article: Mendall Thompson looks back on a 40-year career with America’s Christian Credit Union he sees God’s blessings in all of his experiences.