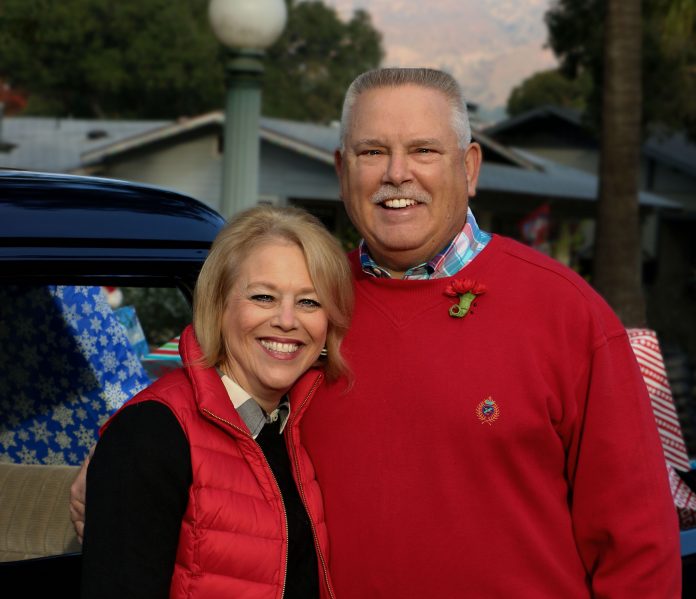 Mendell Thompson (76) can’t help but call his life blessed. Thompson will be retiring in March 2020 from a more than 40-year career at America’s Christian Credit Union (ACCU). Since 1986, he has been the ACCU’s president and chief executive officer – a role he took on at just 32 years of age.

Thompson has also served on the city council for the City of Glendora for the past four years, including serving as mayor in 2018. He is known as a church and family man as well as a businessman and leader. He and his wife, Reanna (Tubbs) (77), are active in the Glendora Community Church of the Nazarene. They have two adult children, Jana (Thompson) Jacobsen (02) and Darren Thompson. Jana and her husband, Brock, are parents to Aaron, age 12, and Andrew, 9. Darren and his wife, Tamara, are parents to Claire, 8, and Ben, 5.

Although he has made the most of every opportunity, Thompson is quick to give credit to God – and also to the support of his family and the teams around him. He sees the blessings in all his experiences – from coaching his kids in soccer and Little League to enduring chemotherapy in 2002 to leading his company through good and hard times and experiencing the pure joy of grandchildren.

Thompson’s life was influenced by PLNU from his childhood. His parents, Lewis and Barbara, both devoted their careers to the university. When it was his time to go to college, PLNU (then Pasadena College) was the natural choice. As it turned out, Thompson was part of the group of students who began their degrees at Pasadena College and moved with the school to San Diego. He was even part of the group that helped set up chairs and get the campus in order during the summer of the move. Thompson remembers the move as an adventure that bonded him and his friends deeply.

“We didn’t have hot water in Young Hall for the first six months,” he laughed. “It was a challenging but adventurous experience. Great friendships were built through that enduring experience.”

Hot water or no, Thompson said that when it came to his academic experience, he “couldn’t have asked for better.” A history and political science major, he appreciated great professors like Dwayne Little, Ph.D., Ron Kirkemo, Ph.D., and David Strawn, Ph.D. He also admired President Shelburne Brown, Carroll Land, Ph.D., and Chaplain Reuben Welch.

“Spiritually, I became much more centered and rooted in my own walk with Christ during my time there,” he said. Thompson also met and married Reanna while they were both students and garnered his first work experience on campus. “Campus security was my first job,” he said. “That experience enabled me to learn a lot about working with people, with leadership, with peers, and with difficult sorts of situations.”

“Spiritually, I became much more centered and rooted in my own walk with Christ during my time there.”

Thompson built on those lessons and gained useful knowledge at another college job: working for Sears in their credit services area. That experience and his education helped him land a job at America’s Christian Credit Union, then called Nazarene Federal Credit Union, after he graduated. The job was a fit right away.

“Our founder was looking to retire in a few years, and he took a liking to my skill sets,” Thompson said. “And I really fell in love with what the credit union was doing. I was selected to succeed him in 1986. I was young, and I probably didn’t really comprehend the enormity of what that job was, but I loved what we were doing and the services we were able to provide. That started a career path for me.”

Since 1986, Thompson has led ACCU as president and CEO. When he began, the credit union only offered savings and loans. He saw the company through the creation of all the modern services it offers – “checking, credit and debit, IRAs, student loans, all of the services you would expect your credit union or bank to have.” He led the credit union through a charter change in 1993 that allowed it to make church loans and spearheaded the formation of unique programs such as processing Christian healthcare sharing and funding adoption loans.

“Mendell has influenced the lives of thousands through providing financial resources to churches when such resources were difficult to acquire,” said Joe Watkins, Ph.D., past PLNU executive vice president. Thompson also led ACCU well through difficult times, including the 21 percent prime rate era and the Great Recession that began in 2008. Through it all, he and his team have kept the credit union profitable every year. “I’m very proud of that and the kinds of leaders we have employed to be able to do that,” he said. “We’ve built a great team here.”

During his time at the credit union, Thompson has appreciated the opportunity to make a significant difference in the lives of individuals, families, and churches.

“I want to help people, churches, and ministries of every kind to manage their money well in order to honor God and to have a generous spirit,” he said. “Being able to do that is a high call, but it’s a calling that I wake up to every day. Every day is a great day and a chance to serve and contribute to the financial success that our churches and schools and our members enjoy.”

Although Thompson is well respected for the array of work he has done at ACCU, he is perhaps most often heralded for the adoption loan program the credit union offers. For the past 11 years, ACCU has offered low-cost adoption loans to families. More than 2,000 children have found their forever homes with the help of an ACCU loan.

“I can’t think of a more sacred loan than an adoption loan,” Thompson said. “Missionally, it speaks well of us. Biblically, the Lord calls us to attend to orphans and widows. My heart is just blessed when I hear about a family adopting a special needs child. We’ve been recognized by Congress and others for the program because it fills a unique need in our society. It’s definitely been a high point.”

In 2014, the Congressional Coalition on Adoption Institute presented Thompson with the Angel in Adoption award. Thompson’s career at ACCU is a major accomplishment on its own. But through excellent time management, outstanding family and team support, and strength from God, Thompson has also been able to serve his community in other significant ways. As mentioned, he has spent the last four years as part of Glendora’s City Council. In Glendora, the mayorship rotates between the city council members as a one-year term, and Thompson filled that role with excellence in 2018. “Civically, being mayor of a city was certainly a high point in my own life,” he said.

He also feels honored to serve on PLNU’s Board of Trustees and Foundation Board as well as several other financial and community organizational boards. “Being on the PLNU boards is an honored position that allows me to serve. I love the school, its mission, and as I said, my parents dedicated their lives to it,” he said.

Most of all, Thompson enjoys time with his family – especially his four grandchildren. He and Reanna have been married 44 years. Reanna spent much of her career as a nurse at PIH Health in Whittier. She spent her last decade before her April 2018 retirement as chief nursing officer and COO of PIH Health Enterprise. “I’m very proud of her,” Thompson said.

When his children were young, Thompson coached their sports teams. Now he takes pride in the fact that his daughter is a fifth-grade teacher, and his son is vice president of credit services at ACCU.

Thompson is an Angels fan and a big USC sports fan. Thompson has been able to achieve so much and serve in so many ways thanks to having clear priorities. Though he has always valued his family, faith, and work, he said battling colon cancer in 2002 made what was important to him even clearer. “I am so blessed,” he said.

Thompson has lived a life of paying his blessings forward to others by using his God-given gifts and abilities.

“I have had the distinct privilege of working with Mendell for over 35 years at ACCU,” said Terri Snyder, the credit union’s senior vice president and chief operations officer. “These phrases will always resonate in my mind as the key focus of Mendell’s leadership at ACCU: ‘Take care of the ball’; ‘Get back to work’; and ‘Fight On.’ It is within these three simple phrases that he often focuses his leadership skills. He has instilled in each of his management team that we must take care of the ‘ball’ (ACCU mission to Reach, Serve and Teach), celebrate our successes, but ‘get back to work,’ and, in everything, ‘fight on.’ More than these, his guiding principle has been to give God the glory in all that we do. He has been a shining example of that throughout his career. On behalf of myself, and the entire ACCU team, we congratulate you, Mendell, on a well-deserved award.”

PLNU is pleased to present Thompson with the 2019 Distinguished Achievement Award. Join us Saturday, November 23, 2019, at Homecoming to hear from Mendell Thompson in person during the Distinguished Award Presentation.