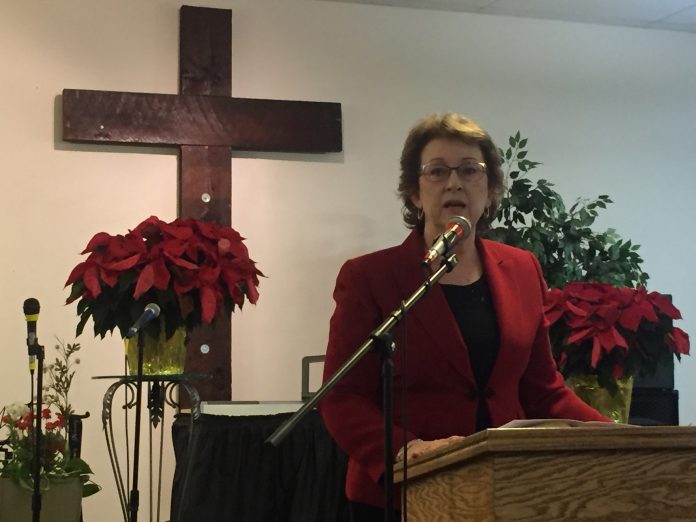 Vicki (Honea) Copp (77), D.Min., has had a lot of job titles, but her career is cohesive. She has been on a path of ministry her entire life even while the specific roles have varied. Being a woman pastor has been a blessing, but it has not been easy. Copp has forged a path less taken, making the way easier for those who follow.

“Vicki has been a strong, consistent, winsome voice supporting women across the Church of the Nazarene who were exploring or fully engaging a call to vocational ministry,” said PLNU vice president of spiritual development Mary Paul, D.Min. “I can remember key moments when Vicki has offered words of encouragement, acts of care, and a quickness to celebrate as I have navigated living out ministry in the context of the local church and higher education.”

Copp’s relationship with Christ began at a young age. She was born in Mesa, Ariz. Her father became a minister when she was in third grade. At age 9, she fully surrendered her life to Christ. As a teen, she thought she was meant to be a missionary. At PLNU, she studied music education.

“I got to Point Loma and kinda felt like everybody could do the things that made me feel important in my small town of Blythe: play the piano, sing, all the activities in high school. I had a bit of adjusting there, but I got involved in choir, orchestra, and dorm life. I had a great time at Point Loma. I felt like I had professors that cared about me, and I made lifetime friends with whom I still keep in contact. It was a great time for me. That’s also where I met Dan.”

Vicki married Dan Copp (77), D.Min., the day after their Commencement. Using her music education degree, Vicki taught stringed instruments in Kansas City when Dan was in seminary, beginning in 1980.

After moving back to California, Dan and Vicki took their first pastoral assignment in Oakland. Vicki worked in music ministry. The Copps’ two daughters, Mackenzie (08) and Megan (09), were born in Oakland before the family moved back to San Diego in 1987 to pastor Mission Valley Church of the Nazarene. During that time, Vicki experienced her own call to preaching ministry.

In an article she wrote for Holiness Today magazine about her call, she said, “It was a very emotional experience, and I wondered what people were thinking, as tears rolled down my face, a response totally out of context with what the pastor, my husband, was preaching. At home, I shared with him what happened, and we decided to watch and wait to be sure this really was a call from God.”

Questions circulated in her mind: what would people think? How would a move to preaching impact her family? Would people support her or think negatively of her? Would friends think she was having some sort of midlife crisis?

Despite her fears and uncertainties, when General Superintendent Raymond Hurn asked those with a new call to ministry to come forward at district assembly, the Copps knew it was time for Vicki to heed the call she had heard.

“By the grace of God and with the encouragement of my family, our church and our district, I was able to respond in obedience,” she said.

Copp began working on her Master of Arts in theology at PLNU shortly thereafter and was ordained on the SoCal District in 1997. She served in Bible study and worship ministry areas in Mission Valley until the Copps moved to Arizona when Dan became a District Superintendent (D.S.) for the Church of the Nazarene in the year 2000.

When Dan became D.S., Vicki worked as director of the Arizona District School of Ministry. She also preached in many churches and was often the first woman preacher a congregation had hosted. This preaching helped lay the groundwork for women to be invited to pastor on the district in the future. Copp also taught online courses for Nazarene Bible College starting in 2002.

Throughout all of her roles, Copp has had the opportunity to build relationships and support others – especially other women pursuing a ministry call.

“My most rewarding experience has been the opportunity I’ve had to influence other women clergy,” she said. “I have been encouraged to learn that God has used me in significant ways in their lives.”

Copp led groups of women clergy in fellowship and support in San Diego, Arizona, and Kansas City. She also served as the Nazarene representative to the Wesleyan Holiness Women Clergy Conference during her time in Arizona. She first attended the conference before her 1997 ordination. When she walked into her first conference, she saw the pictures hung around the walls of different denominations’ women leaders and preachers. She realized she was in good company. “I realized I’m not as weird as I thought I was,” she laughed.

“My most rewarding experience has been the opportunity I’ve had to influence other women clergy. I have been encouraged to learn that God has used me in significant ways in their lives.”

Certainly, Copp has good company in her call and in the perseverance and trust in God it has required.

“For more than 20 years, Vicki has been a source of encouragement to and wisdom for me,” said Deanna (McClesky) Hayden (00), executive pastor at Southwood Church of the Nazarene in Missouri. “She has lived an example of what it means to follow the call of God on her life, even when God calls in unexpected ways. She has constantly made herself available as a mentor, pastor, and friend, always willing to not only listen to and pray for me, but to share vulnerably from her own life experiences. In one of the most dark and discouraging times of my life in ministry, she contacted me because as she had been studying the scriptures and praying, she felt God telling her that something hopeful was about to happen. She offered it as a word to me: ‘Don’t give up!’ And sure enough, within a short time, the Lord came through faithfully. Her willingness to journey with me has resulted in one of the most formational relationships I’ve ever known. Words can’t adequately express how grateful I am that she is in my life.”

Copp has followed her call with full commitment, even when remaining faithful to it required being patient for God’s timing. She has put trust in God first. That kind of life is a model for all.

Ron Benefiel, Ph.D., past president of Nazarene Theological Seminary and current lead consultant for mission resources and pastoral relations in the PLNU Center for Pastoral Leadership, summed up Copp’s story of faithfulness well.

“Vicki Copp is a faithful servant of Christ and the Church,” he said. “From early on, she has known and responded to the call of God on her life to serve in pastoral ministry. For most of the time, that has meant serving in a supportive ministry role with Dan, her husband, in his ministry or as associate pastor for several years in Overland Park, Kansas. Vicki has multiple gifts in preaching, teaching, and music. She has developed those gifts, including earning a doctorate in ministry from Nazarene Theological Seminary. NTS recognized her gifts and welcomed her into the ranks of the faculty with responsibility for practical theology. But Vicki has always felt the call to preach and only recently has that door opened where for the past couple years she has served as senior pastor of a church in rural Missouri. It is a dream – and a calling – come true! PLNU can be proud to recognize her as one of their own.”

PLNU is pleased to present Copp with the 2019 Distinguished Achievement Award. Join us Saturday, November 23, 2019, at Homecoming to hear from Vicki Copp in person during the Distinguished Award Presentation.