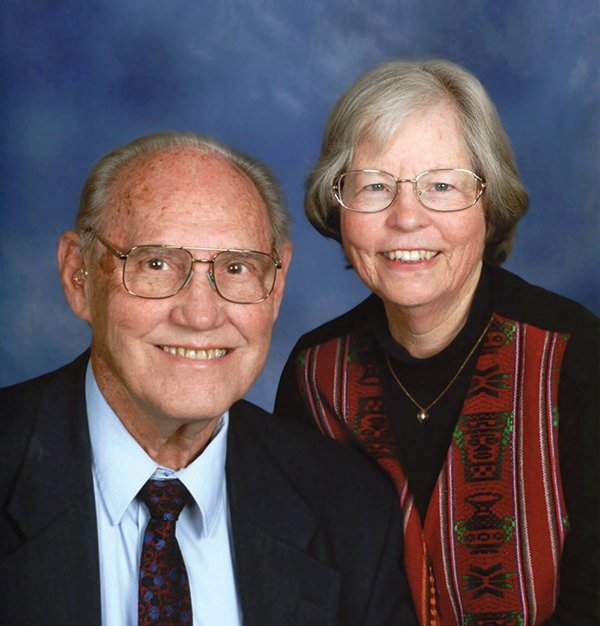 Larry (B.A. 60, M.A. 61) and Judy (Slater) (59) Webb have been missionaries for most of their lives, and they believe some of their most important and inspiring mission work has actually been done during their retirement. The Webbs have sought to fill a gap by providing a way for people from smaller churches to participate in missions through the Church of the Nazarene. They call their model Maverick Work and Witness teams.


The concept is simple but creative. Rather than having a single congregation raise the full funds needed to send a Work and Witness team abroad, the Webbs bring together individuals from different churches around the nation. Each person is responsible for raising just $500, but combined, they are able to fully fund a team. In addition to construction projects, Maverick trips usually include medical or dental clinics that give people in the community a reason to come to the new church site to make an initial connection. They also offer children’s activities and show the JESUS film. Most of their work is done in Bolivia.

Those who can’t go on the trips directly can serve as proxies, sponsoring others. Thus far, 13 Maverick proxies have been sponsored, including university students, pastors, and district leaders from Bolivia.

Though the Webbs met while they were both students at Pasadena College, they weren’t married until years later. Each had a separate career as a missionary for the Church of the Nazarene first.

“I decided to be a missionary when I was a little girl,” Judy said. “I heard a missionary from China during the war who said the boys and girls in China need someone to tell them about Jesus. I thought, ‘I can do that.’”

Judy earned her degree in education and taught for four years before being appointed as a missionary to Africa. She served as a hospital bookkeeper and Bible and music teacher. Communications with home were limited and she had to learn several new languages, but despite the challenges, Judy always remained committed to sharing the Gospel.

Larry’s call to missions came not in childhood but at Pasadena College. He had become a Christian through a friend he met in the military. He and his first wife, Jean, were married at PC, and spent many years doing mission work in Bolivia.

After Jean died, Judy and Larry reconnected at PLNU when both were in attendance at the same commencement ceremony. They spent time in Bolivia and pastoring in San Diego together before retiring in 1998. Since then, the Webbs have engaged in many worthwhile Maverick projects. But they are especially excited about their newest endeavor: building a Nazarene student center near the university in Trinidad, Bolivia.

“I have to confess that we have had some awesome projects, but I think this is the most potentially dynamic,” Larry said.

The university attracts students from much of the “Amazonia” area of the country, which includes many small rural and river towns. Students fly into school on small chartered planes, ride in on river boats, or come along roads that are not easy to travel. Understandably, few go home on the weekends. In this, Larry sees a great opportunity to impact their lives.

“I received my inspiration in 1974 when I did a faith promise event in a Palo Alto church,” he said. “Right across from Stanford University was a place called Baptist House. Students could drift in there between classes or at night or on the weekends. They had a popcorn machine and a Coke machine and IBM Selectric typewriters … But the most important thing they had was a passion for discipling new Christians. We are trying to replicate that with a Nazarene House — Casa Nazarena. The concept is that if you do something significant with the students while they are there, they will go out as dynamic Christians who will impact the world.”

As in their other projects, Larry focuses on the lessons he imparts in his book But Let’s See What God Wants to Do, published by Amazing Grace Press: “vision attracts resources;” “sacrifice inspires others to participate;” and “perseverance gives God time to work in our behalf.”

Related Article: DA winner Dan Spaite, M.D. (79), has committed his life to balance, which has been tremendously fruitful in bringing healing and God’s love to others.