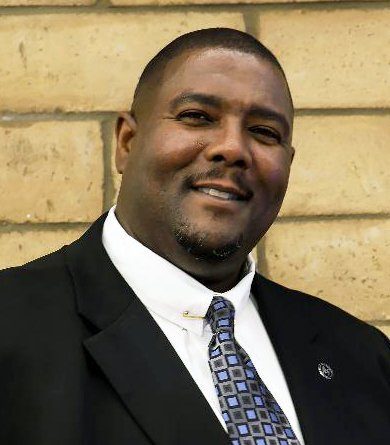 Leonard J. Thompson III, Th.D. (91), has devoted his life to ministry and music. Thompson is the president and CEO of M.A.N.D.A.T.E. Records, an acronym for “Make a Necessary Difference at the End.” Founded in 1995, the label features an incredible collection of gospel, soul, rap, jazz, and worship artists.

Thompson has also been in the education sector since 1983, both as a student and a leader. For 15 years, Thompson advocated for a harmonious education community in the San Diego Unified School District’s Race and Relations and Advocacy department. Since 2016, Thompson has been a counselor for Perkins K-8, a small school with 40% homeless children located near Father Joe’s Villages, a San Diego-based nonprofit homeless shelter. He received an honorary doctorate in theology from Next Dimension University in 2019.

For nearly 30 years, Thompson has started his day at 3 a.m. and has often ended as late as 10 or 11 p.m. From counseling students to recording music or radio programs, Thompson plans his day around sharing the hope and kindness of Christ with everyone he reaches.

“I come in, meditate, work out, get to the radio station, do the show, head to the [counseling] day job, and after that I produce music and shows,” Thompson said. “All of what I do in a day are different levels of my ministry.”

“I come in, meditate, work out, get to the radio station, do the show, head to the [counseling] day job, and after that I produce music and shows. All of what I do in a day are different levels of my ministry.”

Growing up, Thompson was impacted by the encouragement and generosity of his great uncle, Bishop Junious Augustus Blake Sr., a pastor at Jackson Memorial Church of God in Christ and a fervent mentor within the church and in his family.

When Thompson was 10 years old, Blake announced at the end of a sermon that he heard there were many young congregants interested in music and asked them to meet with him after the service. After church, several young church members, including Thompson, gathered around Blake and expressed interest in playing an instrument.

“He told us each to write down the instrument we wanted,” Thompson explained. “He said, ‘everyone who’s serious, be here on Saturday. We’re going to start a brass band.’”

Blake brought in a music professor to teach them traditional etiquette and music theory. Then a large truck filled with musical instruments pulled up to the church, and the aspiring young musicians were able to pick out their own instruments.

“First, he had us play at the main service, which was 700-800 people, but it didn’t stop there,” Thompson said. “He took us to LA when he was guest speaking at this church; he took the ushers along and wanted the brass band to come too.”

During the church members’ trip to LA, they had luxury-liner buses, and the brass band had its own bus. The band continued to travel to churches all over the U.S. and was enthusiastically received everywhere it went.

“Bishop never did anything small,” Thompson said. “At that point we were a touring band — you couldn’t tell us anything different.”

“Bishop never did anything small. At that point we were a touring band — you couldn’t tell us anything different.”

By the time he was a senior in high school, Thompson knew churches and people across the country from a variety of denominations. He excelled in academics as well as music, and became the first African-American valedictorian at James Madison High School. After studying as a Regent and Chancellor Scholar at UC Berkeley, and receiving his business administration degree from San Diego State University, Thompson’s heart moved even further toward helping students, especially in inner-city communities. Thompson attended PLNU for his master’s in educational counseling and later returned to PLNU to speak at events and conduct training there for various San Diegan organizations. He explained he always held Point Loma Nazarene University in high regard and still has connections there.

“Point Loma has a great history,” Thompson said. “I remember when it was Pasadena College, but its new location remains the prettiest campus in all of San Diego.”

M.A.N.D.A.T.E. Records grew out of the desire to equip new, talented musicians with the resources and opportunities to shine. Thompson sees the company as a branch of the same ministry that helps young people, and even hosts internships for students from PLNU and other colleges in San Diego.

“A lot of the employees and staff that are part of M.A.N.D.A.T.E. Records come from my meeting them in my travels in education,” Thompson explained.

M.A.N.D.A.T.E. Records has three components: the record label, production, and a nonprofit. The record label is the parent company and longest-standing component of the company and has allowed Thompson to highlight talented performers who could inspire others to enter the world of music.

“The record label was the original vehicle,” Thompson said. “What we did with the vehicle was that it also created production and opportunities to bring people into the music industry.”

“Victoria is now preparing to take over Oral Roberts’ praise and worship team!” Thompson said. “But it all started at Point Loma Nazarene.”

Soprano saxophonist Reggie Codrington glorifies God through a blend of smooth jazz and funk and has enjoyed a successful career of playing serene, uplifting music despite living with cerebral palsy. Although doctors initially told Codrington’s parents he wasn’t expected to live past childhood, he’s now taking care of his parents and family. He’s often played jazz concerts alongside his father, the acclaimed trumpet player Ray Codrington and has been with M.A.N.D.A.T.E. since 2017.

Hip-hop and rap artist Dontae grew up hustling and selling drugs, which he described as his “family business.” After facing jail time, Dontae dedicated his life to Christ, and his music is aimed to be testimonial to those who don’t often listen to Christian rap. He serves as the director of Westsiders Urban Outreach and has been in ministry for over 20 years.

“Dontae was looking at 25 years to life but is now ministering in the toughest neighborhoods,” Thompson said.

“Dontae was looking at 25 years to life but is now ministering in the toughest neighborhoods.”

“It’s a ‘one-stop shop’ for any artist that comes to our label,” Thompson said. “We do a tremendous amount of production to open up the doors for Christian artists.”

M.A.N.D.A.T.E. also has a nonprofit designed to train young people in the music industry, offering training in marketable skills like writing, composing, videography, TV, and radio, as well as helping them find work.

In order to promote both its artists and the Gospel, M.A.N.D.A.T.E. Records hosts GODRadio1.com, a multi-faceted, 24-hour Christian radio station broadcast in 37 countries. GODRadio1.com features talk shows discussing current events, U.S. politics, and the Bible. Many of the shows discuss music and feature interviews with up-and-coming artists as well as industry veterans.

“The goal with GODRadio1 is to bring the full experience it is to be a Christian,” he said. “G.O.D. stands for ‘Gospel on Demand.’”

“What makes our show so powerful and so popular is not only do we do interviews with major artists that we play, it’s also a platform for independent artists,” Thompson said. “You could have Kirk Franklin do an interview in the morning and an unknown artist in the afternoon, and they’re given the same hype and the same platform.”

M.A.N.D.A.T.E. produces incredible annual live shows on stages all over San Diego, like the Gospel Lunch at the House of Blues, the San Diego Praise Fest, and Bayside Gospel aboard the USS Midway.

“When we started the label, there weren’t many events outside of just doing church,” Thompson said. “We started looking into how we could create events within the city of San Diego and throughout the country that would involve us getting out of the church’s four walls and spreading the message of Jesus Christ.”