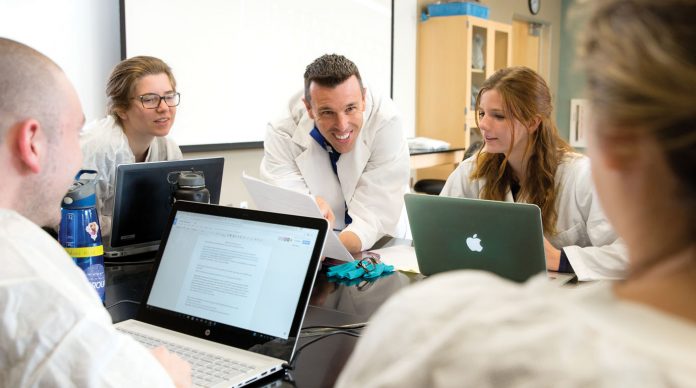 What if effective cancer treatments didn’t cause serious and uncomfortable side effects? What if people with vision loss could have their sight fully restored? These challenging, worthy feats are the end goals of the research to which Dr. Mike Dorrell, PLNU professor of biology, has devoted his career.

A full-time, tenured faculty member at PLNU, Dorrell also spends one day a week overseeing research as a senior staff scientist at the Lowy Medical Research Institute (LMRI), which is dedicated to understanding and treating the eye disease Macular Telangiectasia type 2, also known as MacTel.

Dorrell’s expertise on the formation of new blood vessels as branches from preexisting vessels, known as angiogenesis, is what allows him to do research related to both tumors and MacTel. New blood vessels are typically formed during development, but can also occur during adulthood as part of tumor growth or eye disease.

His research into anti-angiogenic therapy has produced a potential hit of two drugs that seems to work well in combination.

“We are testing and retesting this combination to see if it is ready for publication soon,” Dorrell said.

The drug combination works by blocking the formation of new blood vessels, which, in adults, doesn’t usually happen outside the tumor. Thus, this therapy would be targeted and would cause less side effects than traditional chemotherapy.

Traditional chemotherapy acts upon all fast-growing cells in the body, not just tumor cells, which can result in mouth sores, hair loss, and severe nausea, among other side effects. Dorrell’s second, newer project looks at how ADEPT therapies might be used to activate chemotherapy treatments only within tumors.

“If you can find markers on the tumor, you can inject antibodies that will bind to those markers and end up only at the tumor,” Dorrell explained. “Enzymes, or proteins whose job it is to influence other molecules, can be attached to that antibody and therefore also become localized to the tumor. The next step is designing a prodrug, a chemical addition that will hide the active drug component. When the enzyme contacts the pro-drug at the tumor site, it would cleave off and activate the drug.”

The challenge with ADEPT is twofold. First, researchers must find tumor-specific markers. Second, they must attach an enzyme that isn’t found elsewhere in the body (because then the drug could be activated in the wrong location) but isn’t non-human (because then the body rejects it).

“We are addressing these issues in two ways,” Dorrell said. “One, we are targeting the tumor’s helpers, cells in the tumor microenvironment, rather than the tumor cells themselves. The other part of our strategy is to use a point mutation of a human enzyme. This way, the enzyme is not rejected but only the mutated version will activate the cancer drug. An exciting thing about this research is that many ideas we test came from students.”

Dorrell involves PLNU students in all his research projects, giving them the opportunity to engage in world-class research on projects with the potential to dramatically improve patients’ lives. His work at LMRI adds another dimension to what students can learn and how they can participate in meaningful research.

LMRI is devoted to studying MacTel, a retinal disease that causes a gradual deterioration of central vision and eventually leads to blindness.

Dorrell’s involvement with MacTel research began when he was a postdoctoral student at the Scripps Research Institute. He participated in the MacTel Project, an international collaboration of scientists and medical doctors.

“One of my publications at the time showed proof of concept that led to a clinical trial,” Dorrell explained.

Because MacTel is a relatively rare disease, the MacTel project’s benefactor, the Lowy family, wanted to centralize the research being done on MacTel around the world. When they founded the LMRI, Dorrell took a one-year leave from PLNU to help get the center up and running. Now he spends one day a week at LMRI in complement to his work at PLNU.

“Over the year [I was there full time],” said Dorrell, “we built a lab and offices in La Jolla, and we started a lot of projects. We started testing genetic sequencing … and we also began testing for a metabolic difference.”

Now, Dorrell’s role at LMRI is in directing internal projects and helping to guide the work of externally funded labs doing work related to MacTel around the world. Dorrell’s presence at LMRI has opened up opportunities for alumni as well as students.

“Each summer, LMRI has internships for undergrads. And since 2014, we have had four PLNU graduates hired as full-time lab techs,” Dorrell said.

The students who work with Dorrell on his research at PLNU or LMRI and who take his classes not only learn from Dorrell’ s scientific prowess, but also from his Christ-centered approach to his life and work. For him, his faith is why he does what he does.

“For me, ‘calling’ and my work at PLNU go hand-in-hand,” Dorrell said. “I love how I am able to teach biology, a subject about which I am passionate, and relate it to understanding the loving, creative brilliance of God,” he said. “I also love to use science and research to try and improve the world, both within my own research and by training the next generation of scientists. I try to model how to live a Christ-centered life even when one is far from perfect, and most of all, I love to have a positive impact on students during foundational periods of their lives.”

When he isn’t conducting research, Dorrell can be found at church or playing soccer with his family. Family is a growing concept for Dorrell since he and his wife, Beth, and 12-year-old son, Ethan, just said goodbye to two children for whom they provided foster care for 11 months. Their plan is to welcome more children into their home soon.

“This is something we feel called to do,” Dorrell said.

Dorrell balances his teaching, research, church involvement, and home life with a positive and committed attitude. His example is one many students are eager to emulate.

“I know that I am blessed because I have come to realize that regardless of how much I am privileged to impact my students, they continue to impact me even more,” Dorrell said.

Related Article: PLNU professor Walter Cho descends to one of the deepest parts of the ocean.